Driving back after a tough year

LAST YEAR was a complicated one for car companies in Slovakia. The global economic downturn decreased demand for new cars and even the car-scrapping bonus and VAT-related measures failed to maintain car sales and thus production at previous years’ levels. It is already clear that aggregate car production in Slovakia last year remained below the so-far record level of almost 576,000 units manufactured in 2008. Production is estimated to have dropped by 20 percent, thereby surpassing the Europe-wide average fall of 13 percent in passenger-car production. However, it has not been the same story for all carmakers in Slovakia: PSA Peugeot Citroën Slovakia in Trnava boosted production in 2009 by almost 10 percent. 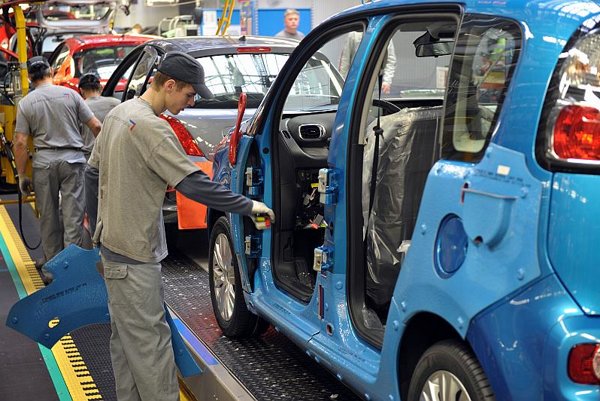 LAST YEAR was a complicated one for car companies in Slovakia. The global economic downturn decreased demand for new cars and even the car-scrapping bonus and VAT-related measures failed to maintain car sales and thus production at previous years’ levels. It is already clear that aggregate car production in Slovakia last year remained below the so-far record level of almost 576,000 units manufactured in 2008. Production is estimated to have dropped by 20 percent, thereby surpassing the Europe-wide average fall of 13 percent in passenger-car production. However, it has not been the same story for all carmakers in Slovakia: PSA Peugeot Citroën Slovakia in Trnava boosted production in 2009 by almost 10 percent.

“We assess 2009 as a year of stabilisation with regards to the fact that the crisis in the automotive industry had broken as early as 2008,” Mária Nováková, the secretary general of the Automotive Industry Association of the Slovak Republic (ZAP), told The Slovak Spectator. “The first quarter of 2009 was also critical, but from the second half of the year we registered stabilisation. We expect 2010 to be at 2009’s level.”

The aggregate production of cars in Slovakia is not yet known because not all car producers have revealed their figures for 2009. The total is estimated to have been 460,000 units, with a significant drop at Volkswagen Slovakia in Bratislava, whose plant produces mainly high-end and luxury models.

2009 began with a gas crisis, which for the Trnava plant meant a forced halt in production for seven working days, according to Švec. In spite of this it launched serial production of a new model, the Citroën C3 Picasso, for which Trnava is the only production centre, earlier than originally planned. The first Citroën C3 Picasso cars were delivered to customers as early as February 2009. For the rest of the year sales of the model were almost 10 percent higher than anticipated.

“The whole of 2009 was marked by the effects of the economic crisis, which were behind the change in the behaviour of clients and their new-found preference more ecological cars with lower fuel consumption and lower CO2 emissions,” said Švec. “Various types of ecological bonus schemes also contributed to the growth in demand. These were applied in the most important markets in Germany, Italy, France and Spain, and a variant was also introduced in Slovakia.”

The situation in the other two carmakers in Slovakia was less positive.

Kia Motors Slovakia in Teplička nad Váhom near Žilina, the most recent carmaker to arrive in Slovakia and the South Korean’s manufacturer’s only plant in Europe, produced more than 150,000 cars in 2009, according to Dušan Dvořák, the company's spokesperson. This was a decline from the 201,000 units manufactured in 2008 and well below its annual capacity of 300,000 units. Apart from cars, the plant produced almost 244,000 engines last year.

“Maintaining employment was one of the main goals for Kia Motors Slovakia in 2009,” Dvořák told The Slovak Spectator. “During 2009 we even managed to create more than 100 jobs thanks to our adding a third working shift in engine production. For the time being Kia Motors Slovakia is one of the biggest employers in the region, employing over 2,800 people.”

Of the models manufactured by Kia in Slovakia, the five-door cee’d, was the most popular in 2009, with over 38 percent of customers ordering this model. The kombi version of the cee’d made up about one third of orders and the Sportage model another fifth of Kia Motors Slovakia’s production last year, according to Dvořák.

For Volkswagen Slovakia in Bratislava, the oldest and biggest of the three mass-production car producers in Slovakia, 2009 was the most demanding due to its plant’s focus on production of more luxurious cars, i.e. the segment which was hit especially hard by the crisis. VW Bratislava manufactures the VW Touareg, Audi Q7 and Škoda Octavia models, and bodyshells for the Porsche Cayenne.

“The introduction of the car-scrapping bonus left production of cars in VW Bratislava unaffected because this bonus is generally designed for lower-category cars,” Vladimír Machalík, Volkswagen Slovakia’s spokesperson told The Slovak Spectator. “But we registered its positive influence in our production of gearboxes and components.”

VW Slovakia halted production several times last year due to low demand. During these halts it used various tools to keep its employees in their jobs.

“2009 was complicated not only for the automotive industry, but for the whole economy,” Machalík concluded. “But for VW Slovakia it also brought some positive news in the form of the arrival of the production of the New Small Family line of cars.”

VW Slovakia will reveal official results for 2009 only after March 22, but the Hospodárske Noviny financial daily estimated that last year it produced 106,000 cars, down from 188,000 in 2008.

“Bratislava produces the most quality cars, but people have lost interest in luxury during the hard times,” said Jozef Uhrík, ZAP’s president, as quoted by the Pravda daily. “The plant is [also] preparing for production of new models, which affected production.”

The aggregate production of cars in Slovakia in 2009 is estimated to have been 460,000 units, a drop of about one fifth compared to the 575,776 units produced in 2008. Thus Slovakia lost its position as the world’s biggest carmaker per citizen. It was overtaken by Slovenia, in which car production increased by 7.5 percent last year, and the Czech Republic, where production increased by 2.9 percent, according to the Sme daily.

Across Europe the production of passenger cars decreased by 13 percent to 13.4 million units in 2009, the lowest level in 14 years, according to the European Automobile Manufacturers’ Association (ACEA).