ON MARCH 14 a Slovak athlete won the first gold medal for his country in its history at the Tenth Winter Paralympics in Vancouver. Jakub Krako, 19, along with his guide Juraj Medera, beat their competitors in the Men’s Visually Impaired Giant Slalom at Whistler’s Creekside slope. 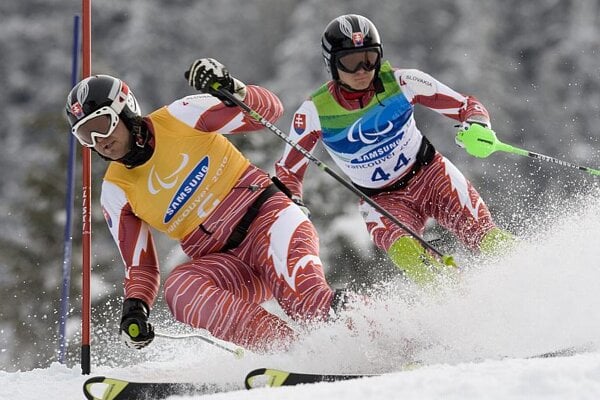 ON MARCH 14 a Slovak athlete won the first gold medal for his country in its history at the Tenth Winter Paralympics in Vancouver. Jakub Krako, 19, along with his guide Juraj Medera, beat their competitors in the Men’s Visually Impaired Giant Slalom at Whistler’s Creekside slope.

A student at the Economic University in Bratislava, Krako expressed his joy and happiness afterwards: “I am unimaginably happy. I consider this the best moment of my life so far. These are moments that can’t be repeated.” He also praised his guide: “It is one hundred percent his share. In a hockey team, forwards, backs and the goalkeeper are equally important. Nobody asks the Hochschorner brothers (Olympic champions in C2) who of them is better or more important in the canoe; they are a team. And I am equally connected with Juraj Medera. I cannot perceive how anyone could differentiate this. It is not possible,” he emphasised. Medera added, “We did everything possible to win and when we arrived at the final post, I knew we had won. You cannot betray that inner feeling that you have mastered a perfect performance.”

Coach Dušan Šimo stressed the importance of the fact that Krako has never had any other guide; he has trained from the beginning only with Medera. Šimo recalled Krako’s beginnings at the Malinô Brdo slope 11 years ago when he started coaching him and as well as all the obstacles and problems they have had to overcome. At the same time, he praised the Slovak Paralympic Committee and its support. Krako conceded after winning the slalom that he wanted to hold a small celebration, but only with soft drinks – because the competition was continuing and he said he intended to give some more great performances. He was true to his word and on March 16 won another gold medal in the downhill race. It is possible that Slovakia could garner some more medals in Vancouver. Skiing at the Paralympics is divided into three groups: visually impaired; sitting skiing; and standing skiing. Visually impaired skiers are guided by people who are not visually impaired who help the athletes to orient themselves. The guides, of course, must be good athletes, too.