Teaching Slovak as a foreign tongue - in Slovakia

THE DEBATE about how to teach Slovak at minority schools where Hungarian is the normal language of instruction is not new to Slovakia. Despite that, it never fails to generate political heat, as can be seen from the reaction to recent statements by Hungary’s president on the subject. Along with heat, the row prompted the nationalist-controlled Education Ministry to draft a controversial proposal that was passed immediately by the government. 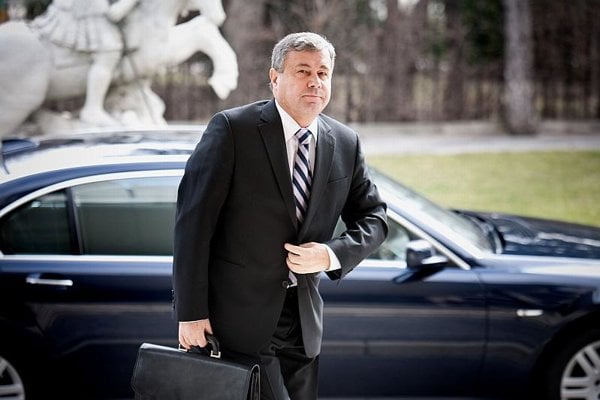 THE DEBATE about how to teach Slovak at minority schools where Hungarian is the normal language of instruction is not new to Slovakia. Despite that, it never fails to generate political heat, as can be seen from the reaction to recent statements by Hungary’s president on the subject. Along with heat, the row prompted the nationalist-controlled Education Ministry to draft a controversial proposal that was passed immediately by the government.

Teachers’ representatives from Slovakia’s Hungarian community say this signals an early salvo in the forthcoming general election campaign. ‘Playing the Hungarian card’ – attempting to stir up Slovak nationalist sentiment based on fear of Hungary and Hungarians – has been a regular feature of recent Slovak elections, as has political and ideological interference in areas such as education. Irrespective of the motive, however, it is not clear whether the Education Ministry will be able to amend the State Educational Programme before the end of the present government’s term.

On March 13, during a visit to Serbia, Hungary’s President László Sólyom stated that Hungarians living in Slovakia, Serbia and Romania should learn the state language in each country only as a foreign language. His comments were immediately denounced by Slovak politicians including Prime Minister Robert Fico, who called the statement an attack on the integrity of Slovakia and an attempt to disintegrate its statehood.

Only days later, at a government session on March 17, Education Minister Ján Mikolaj – a nominee of the Slovak National Party (SNS) – tabled a surprise proposal to change how Slovak is taught at minority-language schools. The proposal, which was passed immediately by the government without being submitted for the usual process of interdepartmental review, will lead to special testing of Slovak language knowledge. The State School Inspectorate should now carry out frequent inspections at the schools in question – the vast majority of which teach in Hungarian – and base recommendations for improving Slovak-language teaching on their results.

Mikolaj is also reportedly pondering making compulsory tuition of some technical subjects in Slovak rather than in Hungarian or other minority languages.

“We regard the minister’s initiative to be the start of the SNS election campaign,” said László Pék, the director of the Association of Hungarian Teachers in Slovakia (ZMPS), adding that the proposal is only an improvisation. Pék said that there has been enough testing, inspection and monitoring at the schools already, and that this had not substantiated Mikolaj’s statements that knowledge of the Slovak language at Hungarian-language schools is low.

“There is a certain amount of truth in the statement that our pupils don’t know the Slovak language perfectly, but they aren’t perfect in mathematics, physics or geography either,” Pék said.

The ZMPS agrees with Mikolaj’s claim that the State Educational Programme should be amended. According to Pék, the teaching of Slovak has been realised at minority schools by using the grammar-translation method, which doesn’t focus on active usage of the language, i.e. speaking and understanding in daily communication. The changes that the ZMPS says are necessary would, it says, lead to teaching a more communicative form of the language. For this, special preparation of teachers of Slovak at minority schools should be planned, since at the moment future minority-school teachers study together with those who later go on to teach at regular Slovak schools.

“I got my degree some 40 years ago and I knew it all – how to teach Slovak, what is the grammar structure of Slovak, what are the grammatical problems and how it should be taught at schools,” said Sándor Fibi, a member of the ZMPS and director of a Hungarian-language primary school in Dunajská Streda. “The only thing they did not teach me was how to teach it at schools with Hungarian as the language of instruction.”

According to Fibi, this is what remains absent from teachers’ preparation to this day.

“Slovak language teaching has been a neuralgic point for the Slovak educational system for over 40 years now,” Fibi said.

While Sólyom has attracted criticism from Slovak government representatives for calling Slovak a foreign language for minorities, representatives of the Hungarian minority in Slovakia claim that there is something to his comments.

“When we speak about the Slovak language and its grammatical structure, its morphology and syntax, it absolutely is a foreign language as a teaching subject,” Fibi said. “But when we talk about its communicative function, we don’t call it a foreign, but rather the state language.”

According to Fibi, there are immense differences between Slovak and Hungarian, as they belong to completely unrelated language families.

For example, while Slovak, along with all other Slavic languages, recognises three genders – male, female and neuter – this distinction does not exist in Hungarian.

“This means that [when learning Slovak] a [Hungarian] pupil must learn something he or she hasn’t even dreamt of before,” Fibi explained. Thus, to be able to speak Slovak correctly in public, Hungarian pupils need to learn it via the methodology of foreign language teaching.

“Our highest state officials have been deaf to this for over 40 years,” Fibi said, adding that the teachers themselves have never really been involved in drafting the State Educational Programme and that teachers are instead merely presented with ready-made curricula and methodologies.

“Now we even teach Slovak as a foreign language under-the-counter,” Fibi confessed.

Bugár, speaking on the public-service broadcaster Slovak Television (STV), said that given the obligation to learn two foreign languages, Hungarian pupils found themselves in a situation where they have to learn their native Hungarian, the state language – i.e. Slovak – and two additional world languages.

He suggested that one of the foreign languages should be omitted from the curriculum of the minority schools in order to give more space to teaching Slovak.

“Our aim is that children learn the Slovak language properly, in order to keep them in our Slovak [labour] market,” she said as she presented the policy.

Pék said that for the Hungarian minority the Slovak language is their second language after their mother tongue and it has a special place in the hierarchy of subjects.

“But it also has a different function from other languages and under no circumstances should it be politically and ideologically abused,” he said.