ALMOST 40 years ago, Bratislava was hit by one of the biggest ecological catastrophes in the history of Slovakia when oil leaking from the Slovnaft refinery contaminated an underground source of drinking water and paralysed Bratislava’s water supply. On March 22, World Water Day, environmental activists unveiled a memorial tablet at the site of the facility where the accident occurred, to recall the event and reiterate their objections to the planned construction of an oil pipeline. They say the link, to connect Slovnaft and a refinery in the Austrian town of Schwechat, would cross Žitný Ostrov, a critical regional water source, and would pose a renewed danger to local drinking water supplies. 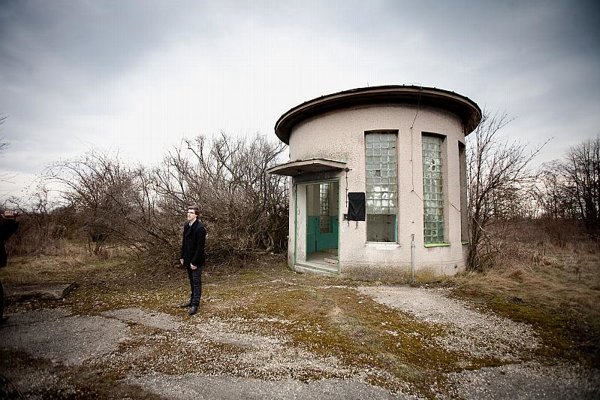 ALMOST 40 years ago, Bratislava was hit by one of the biggest ecological catastrophes in the history of Slovakia when oil leaking from the Slovnaft refinery contaminated an underground source of drinking water and paralysed Bratislava’s water supply. On March 22, World Water Day, environmental activists unveiled a memorial tablet at the site of the facility where the accident occurred, to recall the event and reiterate their objections to the planned construction of an oil pipeline. They say the link, to connect Slovnaft and a refinery in the Austrian town of Schwechat, would cross Žitný Ostrov, a critical regional water source, and would pose a renewed danger to local drinking water supplies.

Under the plan, Slovakia and Austria intend to close a gap in the trans-European oil pipeline network. After the original route across Žitný Ostrov led to huge criticism from Slovak citizens, environmentalists and even the local water utility, the Slovak Economy Ministry ordered an alternative route to be drawn up, postponing the whole project.

“We should learn from those mistakes, not repeat them,” Tomáš Mikulec, from the civic association Nie Ropovodu cez Žitný Ostrov (No to the pipeline across Žitný Ostrov), said at the commemoration.

Back in 1971 about 100,000 cubic metres of crude oil and petroleum products leaked from Slovnaft and contaminated underground water in Podunajské Biskupice, which is now part of Bratislava. The contamination destroyed this huge source of drinking water forever, Zenon Mikle, the spokesperson of the local water utility, Bratislavská Vodárenská Spoločnosť (BVS), explained to The Slovak Spectator.

“The supply of drinking water to Bratislava was completely paralysed,” he told The Slovak Spectator. ”About 95,000 Bratislava citizens were supplied with drinking water only from water tanks for almost one year. The accident caused incalculable damage not only in the form of a drinking water resource lost forever, but also huge costs were incurred renewing the water infrastructure.”

Austrian Federal Minister Reinhold Mitterlehner and his Slovak counterpart Ľubomír Jahnátek signed a Memorandum of Understanding in Bratislava on October 16, 2009, to intensify collaboration between Austria and Slovakia in the oil and gas business.

This memorandum envisaged construction of a crude oil pipeline between Bratislava and Schwechat, according to a press release by OMV, the Austrian oil company that is one of the partners in the project. The pipeline is considered to be of strategic importance for Austria as it closes a gap in the trans-European oil pipeline network which supplies the continent with crude oil from Russia.

“The Bratislava-Schwechat-Pipeline (BSP), with a length of 60 km and a total capacity of 2.5-to-5 million tons per year, will be connected with the current 3,000-km long Russian pipeline network, enabling the direct import of Russian crude oil to the Schwechat refinery,” the press release reads.

The project has been actively promoted by OMV since 2003. However, its realisation was delayed by the liquidation of Russian oil company Yukos Group and the resulting confusion about the shareholder structure of the Slovak project partner, Transpetrol (which was 49-percent owned by Yukos Finance). Transpetrol is now wholly owned by the Slovak government.

During a press conference in Bratislava held to mark the signing ceremony, Gerhard Roiss, OMV deputy chief executive and executive board member responsible for refining & marketing, stressed once again the importance of the project.

“The construction of this crude oil pipeline will enable for the first time delivery of crude oil to Austria directly from Russia,” said Roiss, as quoted in the press release. “This diversification plays a pivotal role for Austria as it considerably reduces the country’s dependence on other transport systems."

Currently, the Schwechat refinery is supplied with imported crude oil from Trieste’s harbour via the Transalpine Pipeline and the Adria-Wien Pipeline.

The new pipeline would be of strategic importance also for Slovakia as it would support the supply of the Bratislava refinery in the event of an interruption in Russian supplies. “The transport of crude oil is planned in both directions... The construction of the BSP will lead to a better diversification of transport routes, which along with the planned reverse-flow will considerably enhance the security of supply of both countries,” reads the press release.

While the construction of 10 kilometres of the pipeline on the Slovak side across Žitný Ostrov has aroused huge criticism, route rights for the 50 kilometres of pipeline in Austria have already been practically secured.

OMV, which holds a 26-percent share in the joint venture to build and operate the Bratislava-Schwechat Pipeline, is now waiting for the outcome of the discussion currently going on in Slovakia.

No to the pipeline via Žitný Ostrov in Slovakia

The civic association Nie Ropovodu cez Žitný Ostrov, supported by Greenpeace in Slovakia, launched a petition against construction of the pipeline using the route via Žitný Ostrov. And Daniel Gemeran, the director general of water utility BVS, published an advertisement in the Austrian media to inform the public there about the matter.

“We cannot imagine a situation in which a pipeline takes this route,” Gemeran wrote in his open letter published in Die Presse on February 24, as cited by the TASR newswire. “This would mean a potential danger for our drinking water resources … According to BVS it is necessary to look for other solutions which will ensure that the planned pipeline does not take this route.”

BVS believes that this advertisement achieved the objective of informing the Austrian public.

“The aim of the director general was to inform the wider Austrian public about this matter and point out the potential risks which may occur if the pipeline is built along this route,” Mikle, the BVS spokesperson, told The Slovak Spectator. He added that BVS’ assumption that the Austrian public was insufficiently informed about the matter had been confirmed. “We have received a number of calls, e-mails and letters from Austrian citizens, as well as representatives of the Austrian media, who have begun to take a closer interest in this matter and have asked how they can help us.”

BVS points out that oil in the planned pipeline would be at a pressure of about 40 atmospheres and any potential leakage would take place so quickly that even the most modern technique would be not able to prevent contamination of underground water.

According to BVS, Žitný Ostrov, an inland island enclosed by the Danube River, its branch the Malý Dunaj, and the Váh River, represents the most important accumulation of underground water in Slovakia. It hides beneath its surface stable supplies of 10 billion cubic metres of quality drinking water constantly replenished by water soaking from the Danube River. Its high quality water supplies the whole of Bratislava Region as well as large parts of Nitra and Trnava Regions. In case of need it can be used to supply water to as much as three-quarters of Slovakia.

The civic association Nie Ropovodu cez Žitný Ostrov is fundamentally opposed to the construction of a pipeline crossing Žitný Ostrov.

“Žitný Ostrov is the biggest reservoir of water in central Europe,” Miroslav Dragun, the chairman of the association, told The Slovak Spectator. “Important biotopes are also located there and, last but not least, Hrušovská Zdrž dam is the biggest winter habitat of birds in central Europe. Thus a potential accident at the pipeline might destroy this natural treasure.”

The association’s petition against the pipeline route across Žitný Ostrov had been signed by about 20,000 people by mid March, and signatures are still being collected. It is also meeting and debating the issue with environmentalists from Greenpeace, Ekoforum, members of the Slovak Parliament as well as mayors of towns and villages in the affected municipalities.

While pipeline construction was projected to start in 2012, the current timeframe for the project is unclear as the Slovak Economic Ministry has ordered an alternative route for the pipeline bypassing the whole of Žitný Ostrov.

“We perceive the activity of citizens and their concerns from potential consequences and thus we said that we will work also on a route bypassing Žitný Ostrov,” Minister Jahnátek said in mid December, as quoted by the SITA newswire. “We will not uselessly traumatise the citizens. I have ordered elaboration of two variants, one short and one long, which will bypass the whole of Žitný Ostrov.”

With regards to preparation of the alternative route, Jahnátek said he believes that neither the current nor even the next government, due to be formed after the general election on June 12, will carry out the project.

The Slovak Economy Ministry said it supports construction of a pipeline connecting Slovakia with Austria from the viewpoint of energy security.

“The planned reverse usage of the pipeline Bratislava-Schwechat will significantly help Slovakia in case of events similar to the gas crisis of January 2009,” ministry spokesperson Vahram Chuguryan told The Slovak Spectator. “One of the goals of Slovakia’s energy security strategy is to secure the supply of crude oil to Slovakia from the most secure and economically advantageous resources. Having in mind this purpose, it is necessary to support development of interconnections of crude oil pipelines between EU countries with the aim of increasing the economic stability of EU member countries.”

Chuguryan pointed out that this is not merely the priority of Slovakia’s energy security policy but also one of the priorities of the European Energy Policy and the draft Action Plan of Energy Security which the European Commission introduced in autumn 2008.

“The specific route of the pipeline connection with Austria has not been designed so far,” he said. “Minister Jahnátek has asked the investor in the project, Transpetrol, to elaborate at least one alternative, which will bypass the whole of Žitný Ostrov. The ministry will only support a route for the pipeline, that takes into consideration protection of the environment and meets strict safety and environmental criteria.

“The Economy Ministry stresses that with regard to the pipeline connecting Slovakia with Austria water supplies on Žitný Ostrov will in no circumstances be endangered,” Chuguryan said.

Given the extremely complicated process, no deadline has been set, according to Chuguryan. But Transpetrol will endeavour to submit to the Economy Ministry, as its sole shareholder, route proposals by summer 2010. The projects will then be subject to environmental impact assessment, followed by selection of the final route and other necessary processes preceding construction of a pipeline. Chuguryan promised that there would also be an opportunity for discussion at the level of specialists as well as the general public.