IF THERE is a Slovak custom which is guaranteed to give a translator a headache, it’s the šibačka. What do you call it when a bunch of guys take their whips made of twigs (korbáče), and go door-to-door beating-up ladies, and then getting coloured blown-out eggs (kraslice) in return? 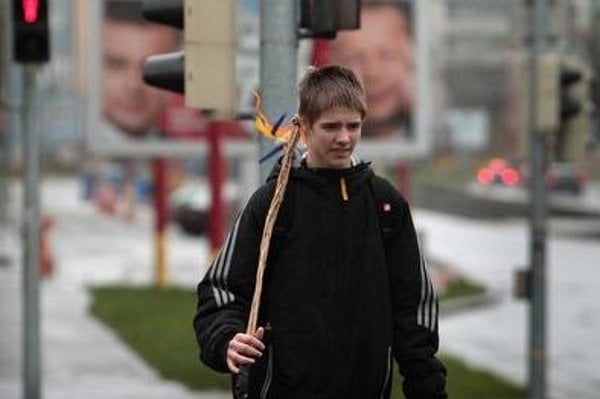 And then there are the absurd chants which more than folklore resemble lines out of a Monty Python movie: Wacky-wimpy, give no fishy, there’s just one thing that I beg, a wonderful Easter egg. (Šibi, ribi, nechcem ryby, ja chcem iba máličko, veľkonočné vajíčko).

An alternative to the whipping is the oblievačka – the pouring or wetting. Either way, a Facebook status declaring that Peter “is going to give his grandma some whipping and do his wetting” could cause some confusion among non-Slovak friends.

The explanation is simple – the Slovak Easter customs are quite different from anything known in the English-speaking world. And that fact may be causing them to slowly die away.

Whereas Valentine’s Day, Halloween, and the Coca-Cola Santa Claus are getting heavy support in films, books and TV series imported from the US, šibačka’s marketing is not nearly as massive.

So whereas few people would consider skipping Christmas, many people choose to go skiing, biking, or just grilling sausages instead of touring the homes of their relatives to drink vodka, slivovitz, or borovička, which they get in return for their acts of gender oppression (itself a favourite, if hard to translate, topic for feminist intellectuals).

The Easter traditions provide a good example that a sensible debate about national identity and its preservation could be meaningful for Slovakia.

Unfortunately, the topic has been kidnapped by lunatics coming up with ideas like forcing children to listen to the national anthem every week or fining TV stations that fail to translate one or two sentences spoken in English.

These examples may sound silly, but they show a broader trend of an ever more aggressive nationalism coming from the institutions that run this country. More and more it’s starting to look like the ladies are not the only ones who could use a little šibačka.