SINCE January 1, Slovakia has had a new Act on Financial Intermediation and Financial Advisory. This comprehensive new law, which the Finance Ministry drew up in close cooperation with the National Bank of Slovakia, unifies supervision across the financial sector and is intended to increase consumer protection. It distinguishes financial advisors – also known as consultants – and financial mediators – also known as agents – in the insurance, capital market, supplementary old-age pension saving, deposit-taking, and loan-provision sectors. 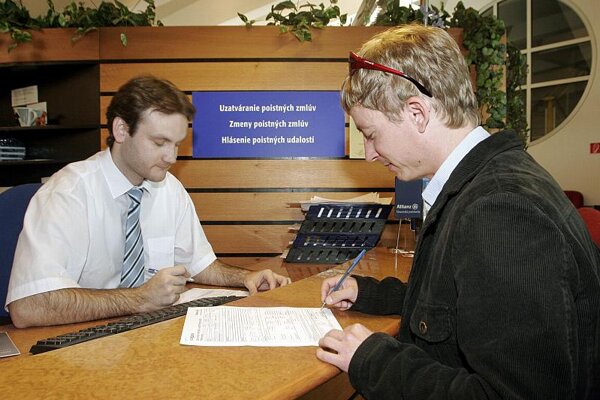 SINCE January 1, Slovakia has had a new Act on Financial Intermediation and Financial Advisory. This comprehensive new law, which the Finance Ministry drew up in close cooperation with the National Bank of Slovakia, unifies supervision across the financial sector and is intended to increase consumer protection. It distinguishes financial advisors – also known as consultants – and financial mediators – also known as agents – in the insurance, capital market, supplementary old-age pension saving, deposit-taking, and loan-provision sectors.

The Slovak Spectator spoke to Martin Sinčák, a member of the presidium of the Slovak Association of Insurance Mediators (SASP), about the main goals of the act and its implementation.

The Slovak Spectator (TSS): The Act on Financial Intermediation and Financial Advisory came into force on January 1, 2010. What are the main aims of this law?

The primary goal of this law, according to the Finance Ministry, which submitted the bill, is to unite regulation of intermediation of financial services, insurance products and reinsurance, deposit and credit financial products, supplementary old-age pension saving, and capital market products. The lawmakers were partly responding to changes in EU directives pertaining to protection of clients and the Markets in Financial Instruments Directive (MiFID).

Philosophically, the bill stems from the Concept on Consumer Protection, which the Finance Ministry revealed back in 2008. The bill was actually based mainly on the provisions of the law on intermediation of insurance and reinsurance, which was in Slovakia from 2005.

TSS: What changes are there for clients under the new law?

For products outside the segment of insurance and reinsurance there is the introduction of rules for licensing of subjects, and submission of the so-called information duty from the side of the intermediator towards the client related to the requirements of the client and the recommendations of the intermediator. An important aspect is that those performing financial intermediation and advisory are obliged to sign a liability insurance policy. Of course, a significant contribution is the requirement to fulfil qualification criteria in order to ensure competence. For the segment of insurance and reinsurance these are not new contributions, as they were more or less standard within the scope of the existing law. But it is important to say that this law pertains not only to the duties of intermediators and advisers towards private individuals as clients; it also adjusts relations with corporate clients – i.e. companies and businesspeople. Requirements for qualification are set only to the level of knowledge of retail products.

TSS: What changes has this law brought for companies engaged in insurance, financial intermediation and financial advisory?

A financial adviser can be rewarded only by the client, i.e. he or she cannot receive any financial reward, most commonly known as commission, from a financial institution. Simultaneously this law does not allow persons who act in or hold stakes in companies registered as financial intermediators to be employed by or own a financial adviser.

As a consequence of this new legislation, there will be only a minimum of insurance advisers in practice.

For now, there is a transition period, so companies which had been engaged in intermediation and advisory in past years are now obliged to start observing the significant provisions of the new law only as of January 1, 2011.

For insurance companies the law brings a significant change as of April 1, 2010. From this date they are obliged to inform a policyholder, via a form, about the terms of closure of the insurance policy even before it is signed.

In the case of life insurance products they are obliged to reveal the average costs for intermediation. But I have to say that the method chosen does not have a very informative value for the client. It is also important that in the case of a life insurance policy, the client can withdraw from the policy within 30 days following its execution.

TSS: Are there similar laws abroad? In what ways does the current system in Slovakia differ from systems abroad?

The system differs in terms of rules covering conflicts of interests, which does not permit our intermediators to perform activities based on recommendation of a product from a selected group of financial institutions or on the principle of an impartial analysis of a sufficient number of available products. Concepts abroad do not ban this, but set clear rules of liability for both activities.

TSS: What are the first experiences with application of the Act on Financial Intermediation and Financial Advisory?

As I have already mentioned, 2010 is a transition period. But it is important to say that the planned concept of the legislation was not adopted in the scope expected. A law on protection of clients’ rights in the financial market is still missing from the mosaic of related legislation. A draft bill [on this subject] was submitted to the cabinet last autumn, but due to flaws it was later withdrawn from its agenda. This law is important, especially because it sets the legislative framework for the launch of the National Academy of Financial Education, whose aim is to oversee qualification of financial intermediators and financial advisers. Because of this, criteria for qualification are more or less equal with the criteria which were previously valid for insurance intermediators. However, associations from professional groupings, which were in the past active in this segment, have started to fulfil tasks to raise the level of education.

TSS: Only a few months after the Act on Financial Intermediation and Financial Advisory became valid, parliament adopted a revision to it. What changes has this revision, adopted in March, brought?

The revision adjusted rules for performance of activities by intermediators and advisers for the insurance sector from other EU countries, and modified rules for maintaining the register of intermediators, among others. The part of the act dealing with conflicts of interest also underwent significant change.