THE MANY frogs and toads living in the Železná Studienka locality near the Slovak capital are protected by law but still need some human help in safely crossing a busy street. 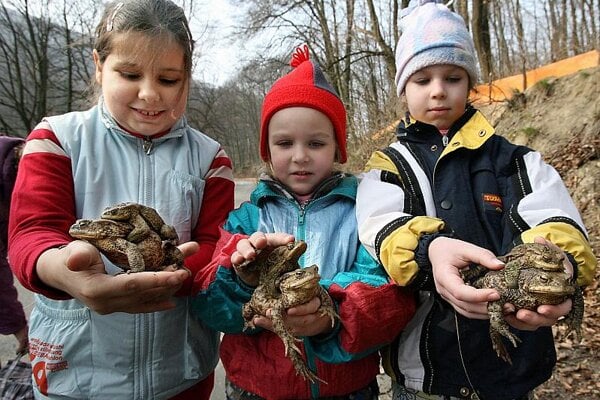 THE MANY frogs and toads living in the Železná Studienka locality near the Slovak capital are protected by law but still need some human help in safely crossing a busy street.

Each spring, thousands of frogs migrate to ponds in this nature reserve to reproduce but when doing so they must cross a road loaded with cars and buses carrying tourists and Bratislava residents to and through this popular recreational area.

On March 20, about 150 volunteers built barriers from plastic foil to change the migration route of the amphibians or to completely prevent them from crossing the road at the most dangerous spots.

“We managed to build everything we planned,” Blanka Lehotská, the head coordinator for the project told the TASR newswire, specifying that the volunteers managed to complete about a kilometre of barriers at two of the ponds.

The volunteers then continued their lifesaving efforts by carrying many of the frogs carefully across the road. Lehotská said that this part of the activity depends a great deal on the weather because as soon as the weather becomes good as many as 1,000 frogs a day can migrate.

Toads and frogs remain faithful to one specific pond during their entire life so if humans, particularly those driving cars, cross their way at this time of mass migration, many can be killed.

So the volunteers attempt to collect as many of the amphibians in buckets and safely transport them to the nearest pond. The numbers of frogs saved – and the number killed – are precisely recorded.

The project at Železná Studienka is organised by the Miniopterus NGO in cooperation with Slovakia’s Nature Protection Agency and the Malé Karpaty (Small Carpathians) Nature Reserve. Similar events are also held in other locations in Slovakia.