WHILE Russian President Dmitry Medvedev was paying his first official visit to Slovakia, Prague was preparing for his meeting with US President Barack Obama on April 8 at which the two presidents signed a new nuclear arms reduction treaty. 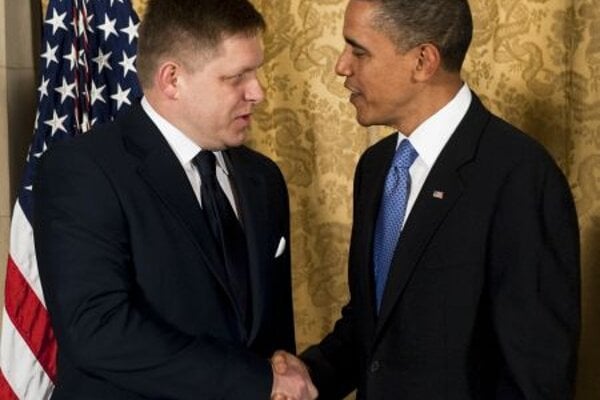 WHILE Russian President Dmitry Medvedev was paying his first official visit to Slovakia, Prague was preparing for his meeting with US President Barack Obama on April 8 at which the two presidents signed a new nuclear arms reduction treaty.

Obama used the occasion in Prague to dine with the leaders of 11 states in the central and eastern European region. Slovak Prime Minister Robert Fico took part in the dinner, along with colleagues from the Czech Republic, Bulgaria, Estonia, Croatia, Latvia, Lithuania, Hungary, Poland, Romania and Slovenia.

“The President is taking the opportunity of his trip to Prague to meet with regional leaders to recognise their contributions and discuss concerns specific to central and eastern Europe and how the region can continue to contribute not just to European but global security,” the spokesperson of the US Embassy in Bratislava, Chase Beamer, told The Slovak Spectator, adding that European security has made enormous progress over the past 20 years and the countries of central and eastern Europe have contributed greatly to that progress.

“The president appreciates very much that 11 NATO allies from the region have agreed to join him for the discussion,” Beamer said. “As Vice President Biden affirmed in his October 2009 speech in Bucharest, we are committed to partnering with Europe to meet our common challenges, and we value the leadership shown by central and eastern Europe in responding to the threats of the 21st century. The President’s engagement with European leaders strengthens the ties between the United States and Europe as a whole.”

According to Beamer, Obama wanted to take this opportunity to acknowledge the region’s significant contributions to collective security and to consult on the important perspectives and key concerns that the allies from the region have raised. He said the topics might include Afghanistan, Iran and NATO.

The main purpose of Obama’s visit to Prague, however, was the meeting with Medvedev and their joint signing of the nuclear arms reduction treaty, which will replace the 1991 Strategic Arms Reduction Treaty, known as START, which expired in December 2009.

Just days before the signing, on April 6, Obama’s administration announced a new strategy for the use of nuclear weapons – the Nuclear Posture Review. In it, for the first time, the US is ruling out a nuclear response to attacks on America involving biological, chemical or conventional weapons. Countries will, however, be spared from a US nuclear response only if they comply with the Nuclear Non-Proliferation Treaty, which does not include Iran and North Korea, the BBC reported.

The new pact signed in Prague restricts the US and Russia to 1,550 warheads, which is about 30 percent less than currently permitted.

In late March, Slovak media, referencing Russian media, started speculating that the signing of the new treaty might take place in Bratislava. The US demurred and in the end Prague was picked to host this prestigious event. Beamer said that this is symbolically connected with the fact that Obama announced a comprehensive agenda to pursue his commitment to reduce the number of nuclear weapons in Prague one year ago.

“On April 8, President Obama is returning to Prague to sign a new START Treaty with President Medvedev that will make a significant stride towards his commitment,” Beamer said. “The new START Treaty demonstrates the continuing commitment of the US and Russia to reduce their nuclear arsenals consistent with their obligations under the Nuclear Non-Proliferation Treaty and strengthens efforts to convince other countries to help curb proliferation.”