RADICAL groups are trying to find ways to get their voices heard by seeking to enter the mainstream, in part by softening their behaviour. Thanks to this trend, the mainstream political system in Slovakia, as well as elsewhere, is becoming more pluralist. This is one of the findings confirmed by the current European Survey of Youth Mobilisation (ESYM) being conducted in several EU countries. 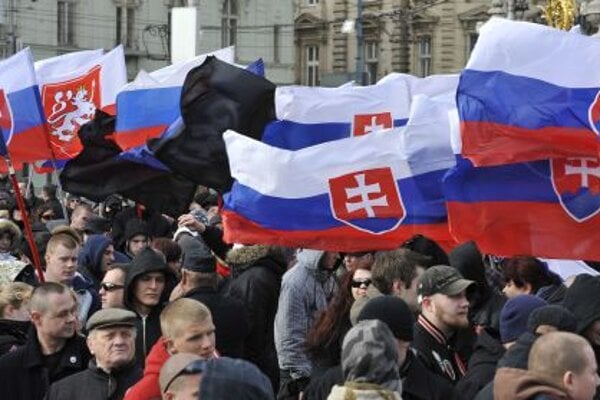 RADICAL groups are trying to find ways to get their voices heard by seeking to enter the mainstream, in part by softening their behaviour. Thanks to this trend, the mainstream political system in Slovakia, as well as elsewhere, is becoming more pluralist. This is one of the findings confirmed by the current European Survey of Youth Mobilisation (ESYM) being conducted in several EU countries.

The ESYM is part of the Intercultural Navigators project of the British Council. It is an initiative that explores social and political activity among 15 to 30 year olds in the Czech Republic, Denmark, Finland, Hungary, Poland, Slovakia and Sweden. The study began in March 2008 and its first reports are being published this spring; the final report is due to be issued in the early autumn of 2010.

The aim of the study is to describe the dynamics and functioning of radical groups in order to make it possible to understand how they succeed in mobilising young people, said Michal Vašečka, the director of the Centre for Research of Ethnicity and Culture (CVEK) which is overseeing the research in Slovakia. In Slovakia and the Czech Republic the respondents were divided into seven categories: far left, earth defence, gay rights/feminist, civil rights, religiously motivated, ethnic, and far right.

The Slovak and Czech data show that young people across the whole political spectrum engage in regular political activities: they tend to vote, attend demonstrations, organise strikes and sign petitions.

“Even those considered the most extreme participate in regular politics,” said Jeffrey Stevenson Murer from the School of International Relations at Britain’s University of St Andrews, who coordinated the project.

Another finding is the distrust in political institutions present across the board – with the left wing (anarchist and anti-fascist groups), the ethnically oriented and the far right showing the greatest amount of mistrust. At the same time, all the groups – save for those on the most extreme left and right wing respectively – agreed that their positions were taken seriously by the political mainstream, Murer said.

This, according to Vašečka, shows that Slovakia, like countries in western Europe, is changing in line with altered behavioural patterns.

“We were trying to break the concept typical of the 20th century which defines a mainstream and some marginal groups around it, with the mainstream seeing the latter as radical and even pathological,” Vašečka said, adding that the collected data very convincingly shows that many of the marginal groups infiltrate the mainstream, influence it and widen it, but that their own identity is also changed in the process: they cease to be radical in the way this was perceived in the 20th century.

“The research thus confirmed that Slovakia and the Czech Republic are part of the same trends that social scientists describe happening in Western Europe: a very steep increase in the pluralisation of society and the fact that ‘modern’ radicalisation is becoming a normal part of ‘postmodern’ trends,” Vašečka said.

Peter Hlohinec, a researcher from CVEK who led the group of sociologists and anthropologists assigned to collect the data in Slovakia, said that when researching the motives for radicalisation and mobilisation one needs to forgo any moral judgment of the behaviour of the people grouped in the radical groups.

According to Murer, radicalisation or political mobilisation comes from young people’s desire for security.

“They are seeking belonging, they are seeking a place of validation and the group becomes the form in which they find it,” Murer said. “Politics only comes later. That is, belonging comes before believing.”

Vašečka said the radical groups are mobilised because they reject the political system created in the 20th century, because they do not believe it to be representing their interests.

“They want to enter the public arena and infiltrate the mainstream to give more power to their voices,” Vašečka said, adding that this is why they try to find ways to become more acceptable – with the same aims, but in a softened form.

The research has so far shown that religious motivation in its broader sense is typical for Slovakia, as opposed to the Czech Republic, where society tends to be more atheist.

“There are numerous types of religious groups in Slovakia, and among them there are some very open groups, but also some very intolerant ones,” said Vašečka. He explained that this, for instance, dispels the united image of the Roman Catholic church because the research showed that people or groups within the Catholic church often have very different, even incompatible, attitudes and opinions.