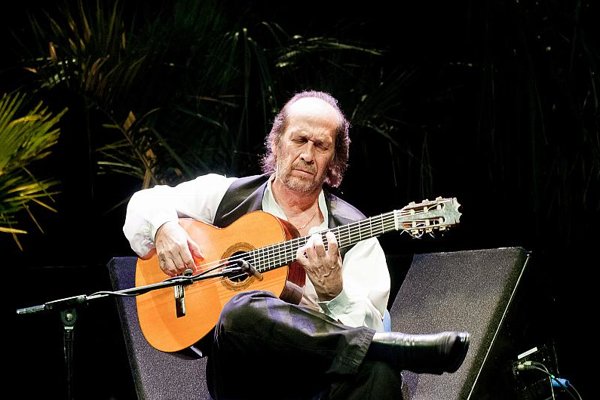 Paco de Lucia, the legend of flamenco who introduced jazz elements to this genre, will perform in Bratislava at the NTC Sibamac Arena on April 14 along with his band. Since his first album was released in 1965, he has recorded dozens of albums, received innumerable awards and is considered a world-class guitar player. You can now get a live taste of his artistry and style in Bratislava. Tickets range from €55 to €70.

Dancing Puzzle – the Bralen Dance Theatre will perform together with the Elle Danse dance school and theatre, the Bratislava Dance Club and other guests in this extravaganza of modern dance.

Blues na lodi – If you like the blues, you can get to know the domestic scene in the unique atmosphere of a ship floating on the Danube river. Performers will include Boboš Procházka, Ajdži Szabó, Pišta Lengyel, Martin Zajko, and maybe even Oskar Rózsa.

Four and More – The Department of Graphic Design at the School of Applied Arts of Jozef Vydra received the award of the Design Forum for its collection of lighting devices, Štyri a viac, with the commitment to arrange an exhibition in the exhibition and information point SATELIT.

Jiří David – My Generation/Moja generácia. Within the project Billboart Gallery Europe 2010, aimed at presenting the wider public with art through billboards, the exterior of Kopplova vila building is now an exhibition space showing the project of J. David at its entry.

Pre každého/For everyone – This exhibition, showing works of Slovak artists such as R. Almási, J. Bártfay, A. Brunovský, F. Hložník, V. Hložník, D. Kállay and others from the collection of Nitra Gallery, is part of the education programme Tvoriť môže každý (Everyone can Create), a cycle of workshops for physically and mentally disabled children.

M. Jarre – Zvonár od Matky božej. The premiere of the ballet The Hunchback of Notre Dame is directed by Jozef Dolinský and features soloists and the ensemble from the Ballet of the State Opera, the Urpín ensemble and the Stred dance group who intend to show their modern adaptation of the renowned work of Victor Hugo.

Záh(r)ada – The word play Garden/Mystery of the ATak theatre is a dance performance that seeks to show the roots of separation, hate, loneliness and extremism in one garden divided by a wall. It is the work of ATak’s head Pavol Danko.


A. Hlinka House of Culture.


SHOW ON ICE: Yevgenyi Plushchenko, the Russian World Champion and Olympic medallist in figure skating who took a two-year break from skating from 2006 to 2008, has returned to full competition and won silver at the 2010 Winter Olympics in Vancouver, setting a record in the number of points for a short programme. He is also performing his public shows on ice once again. His mastery of skating, style and artistic interpretation can be admired at the Steel Arena in Košice on April 13 at 19:00. Tickets are €17 to €47.

Cigáni – The Gypsies is an exhibition showing the life of this ethnic group in the Carpathian Basin around the middle of the 20th century and can be seen in the Libary and Cultural Centre.