THE TRAGIC air accident on Saturday, April 10, which claimed the life of the president of Poland along with those of his wife and a significant portion of Poland’s political elite has generated huge sympathy in Slovakia, where many people – ordinary folk and politicians alike – have strong ties to Poland and Poles. Condolences started pouring in from all parts of the country immediately after news of the tragedy first emerged. 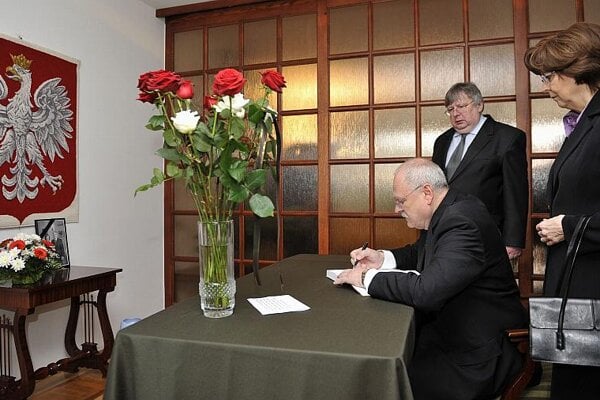 THE TRAGIC air accident on Saturday, April 10, which claimed the life of the president of Poland along with those of his wife and a significant portion of Poland’s political elite has generated huge sympathy in Slovakia, where many people – ordinary folk and politicians alike – have strong ties to Poland and Poles. Condolences started pouring in from all parts of the country immediately after news of the tragedy first emerged.

Slovakia’s highest representatives expressed their sympathies to Poland following the plane crash in Smolensk, Russia, which killed 96 members of the Polish elite, including President Lech Kaczyński, and his wife Maria, several representatives of the Polish government and parliament, the governor of the Polish central bank, several top military leaders, church representatives, and former members of the Solidarity movement. They were on their way to attend a remembrance ceremony for victims of the 1940 Katyń massacre in which Soviet secret police shot dead more than 20,000 captured Polish nationals, including several thousand army officers, during World War II.

Messages of condolences were sent by Slovakia’s President Ivan Gašparovič, Speaker of Parliament Pavol Paška, Prime Minister Robert Fico and others to their counterparts in Poland.

The Slovak government decided to proclaim a Day of State Mourning in Slovakia on Sunday April 18 in memory of the victims and in sympathy with the country’s neighbour.

When he visited the Polish embassy in Bratislava to make an entry in its book of condolences, Lajčák said he was glad that Slovaks responded to the tragedy with solidarity.

“It cannot be expressed in words, because it is a human and national tragedy of such dimensions that we still hesitate to believe that something like it can happen,” he said, as reported by the SITA newswire.

Prime Minister Robert Fico recorded in the same book of condolences words of sympathy on behalf of the government to the relatives of the victims as well to the whole Polish nation, the TASR newswire reported.

President Gašparovič told the media of his shock upon receiving news of the tragedy.


“We were personal friends with President [Kaczyński], as were our wives; I cannot believe what happened,” he said.

“We used to meet before the sessions of the Visegrad Four or other [gatherings]. I was supposed to meet him twice in the coming months. It will not happen anymore…”

The president sent his condolences to Kaczyński’s family, as well as to the families of all the victims and the entire Polish nation on behalf of himself, the Slovak government and parliament in a telegram addressed to the speaker of the Polish parliament and current interim president, Bronisław Komorowski.

In his message in the book of condolences at the Polish embassy Gašparovič also wrote a personal remark: “Goodbye, friend.”

In a video interview with the Sme daily, Magda Vášáryová, an MP for the Slovak Democratic and Christian Union (SDKÚ) and a former Slovak ambassador to Poland with strong ties to the country, stressed that in addition to the present-day political elite the dead included many of those who had stood up against the communist regime in the 1980s. She said she was of one mind with the first post-communist prime minister of Poland, Tadeusz Mazowiecki, who said that it was as if Poland was being punished for the disunity of its political scene, since normally the prime minister and the president would commemorate such events together, and not each hold their own event in Katyń. Polish Prime Minister Donald Tusk had attended a ceremony at Katyń a few days before the president’s fateful flight.

“I hope together with [former] prime minister Mazowiecki that [this event] will shake the Polish political scene in such way that the opposition and the coalition will start cooperating normally, in democratic conditions, within the constitutional rules.”

Andrzej Krawczyk, Poland’s ambassador to Slovakia, said that the tragedy would probably change the political culture in Poland but it was hard to say in what way.

“Really, it is only a slight exaggeration to say that the Polish political elite were decimated by this aeroplane tragedy,” he said, adding that the presidential election will now be held earlier than expected.

The whole leadership of Prawo i Sprawiedliwość (Law and Justice), the right-wing party of president Kaczyński, was on board the plane, except for its leader, the president’s twin brother Jaroslaw Kaczyński.

“But now politicians have to be more orderly, they cannot [argue] in the way they did before,” Krawczyk said. “I believe this will be the message, as I said. The political rows that seemed so important yesterday seem so ridiculous today.”