THIS YEAR’S International Day of Roma found citizens, the state government and NGOs in Slovakia deeply split over what to do about an illegally-built Roma settlement located in Plavecký Štvrtok, in the Záhorie region of western Slovakia. Many non-Roma residents of the village are calling for a fast solution and support bulldozing the settlement, which they claim causes them all kinds of trouble. On the other side, human rights watchdogs are barking loudly about the inhumanity of such an action, and the state government seems also to disagree strongly with this step – but does not seem able to deliver an alternative solution. 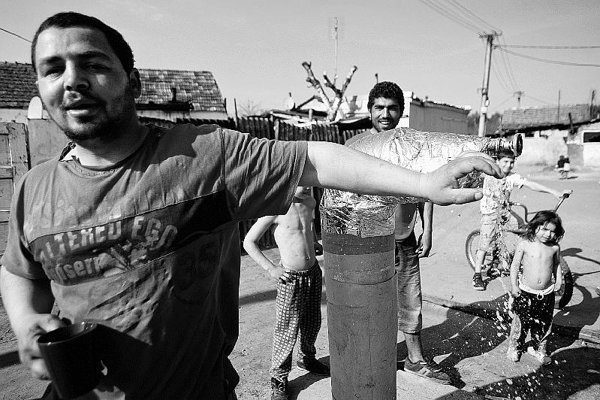 The only water source in the Plavecký Štvrtok settlement. (Source: SME)
Font size:A-|A+0

THIS YEAR’S International Day of Roma found citizens, the state government and NGOs in Slovakia deeply split over what to do about an illegally-built Roma settlement located in Plavecký Štvrtok, in the Záhorie region of western Slovakia. Many non-Roma residents of the village are calling for a fast solution and support bulldozing the settlement, which they claim causes them all kinds of trouble. On the other side, human rights watchdogs are barking loudly about the inhumanity of such an action, and the state government seems also to disagree strongly with this step – but does not seem able to deliver an alternative solution.

Ivan Slezák, who has been mayor of Plavecký Štvrtok for two years, told The Slovak Spectator that the number of illegal houses in the village has mushroomed over the years. Today, Plavecký Štvrtok has the biggest Roma settlement in western Slovakia, home to some 600 people who reside in about 90 houses, all of them, according to Slezák, built without construction permits on land belonging to the Slovak Land Fund (SPF). In addition, some of the houses are on land above an underground gas pipeline – a restricted area where no buildings at all are permitted.

Demolition – the only solution?

“We will start with those [houses] in the restricted area, and then we will see,” Slezák told The Slovak Spectator, referring to the solution he and the municipal council have chosen for the settlement: demolishing the illegal houses using a procedure authorised by Slovakia’s Construction Act.

Using this procedure, some of the Roma homeowners have been requested to legalise their houses and to do so they need to submit 10 documents, the most important being a certificate of land ownership. The government’s plenipotentiary for Roma communities, Ľudovít Galbavý, stated that the Plavecký Štvrtok municipal office had taken this action even though it knew that none of those living in the settlement owned the land under their houses.

If the homeowners do not comply with this request, they will be asked to demolish their houses and if they do not do so, a method for execution of the action or a court order will be used, said Slezák.

Branislav Tichý of Amnesty International Slovakia said that his NGO has been following the situation closely and has called on village representatives to comply with international human rights standards, which require all other alternatives to be considered before demolishing the houses, dialogue with all interested parties, and offering alternative housing to people whose houses will be demolished.

“According to our information, Plavecký Štvrtok hasn’t been following the aforementioned principles,” Tichý told The Slovak Spectator.

The Slovak national government has also condemned the solution chosen by the municipality.

“The plenipotentiary expressed [his] disagreement to the mayor of Plavecký Štvrtok with such a proceeding and warned him about the possible risks and consequences of it – increasing tension between the majority and the inhabitants of the settlement and increased criminality,” Kristína Lempochnerová from the communication department of the plenipotentiary’s office told The Slovak Spectator.

The non-Roma residents of Plavecký Štvrtok, however, have already complained that criminality and tensions between the Roma community and them are unbearable. In an open letter to Deputy Prime Minister Dušan Čaplovič and Interior Minister Robert Kaliňák they stated that Roma residents are aggressive, are not complying to the rules, and that their dogs are running freely in the village, along with the charge that the houses were built illegally in a restricted area.

“Competent bodies know about it, but they’ve done nothing so far,” the citizens wrote in their letter, asking the two government officials for support in restoring legal order in their village.

“The municipal office has no systematic solutions of alternative housing ready to offer for the families, hasn’t prepared the construction lots and did not even talk about buying them with any institution,” Čaplovič wrote in response to the open letter.

The plenipotentiary’s office meanwhile drafted a plan for a meeting between elected representatives of Plavecký Štvrtok and representatives of the Agriculture Ministry, the SPF and the Regional Land Office in Malacky which could result in selecting a location for possible construction of lower-standard rental apartments, Lempochnerová said.

The lower-standard rental apartments could be built as a part of the state government’s programme to solve problems of Roma housing settlements. However, Slezák said the elected representatives of the village have not considered any alternative housing for those families whose homes might be demolished, saying the law does not oblige them to do so.

In fact, he told The Slovak Spectator that village officials have rejected the idea of building low-standard apartments as a solution, “because the village would have to invest a lot into it and the flats would be municipal. Their administration would cost a lot of money and we know very well how these citizens value housing – in a few years it would be all broken.”

Slezák claimed to be between a rock and a hard place in this situation.

“On the one hand there are the citizens of the village who don’t want flats to be built for anyone for free,” Slezák said. “On the other hand, there is the government offering the low-standard houses, which is nice, but building flats for 600 people is not simple, it requires a lot of money and a lot of time, and this is a problem that needs to be solved quickly.”

According to Slezák, the state would contribute 80 percent of the cost of the flats but the village must invest in the construction lots, infrastructure and then provide for the administration of the flats. He told The Slovak Spectator that the village for the moment gives a definite no to such a project.

Is the government to blame?

Laco Oravec from the Milan Šimečka Foundation said in an interview with The Slovak Spectator that the programme for construction of low-standard flats is practically the only housing programme the Slovak government has been implementing to assist Roma citizens.

“We still haven’t found a way to overcome potential lack of interest by some municipalities in building these flats, and such is the case of Plavecký Štvrtok where they have never considered it,” Oravec said, adding that the government programme in itself is not perfect because no evaluation of the outcomes is being undertaken and some aspects are being ignored – such as whether Roma residents will be able to pay the rent and whether the housing costs are adequate to their situation.

While categorically rejecting the solution of demolishing the houses as one that does not reflect the difficult situation the Roma families living in the settlement are in, he stated that the blame is on the state administration, which for decades has been tolerating the reality that many Roma citizens have been living in informal dwellings that do not fulfil legal norms.

NGOs engaged in minority and human rights issues have been speaking with one voice about the state government being incapable of resolving the problems of Slovakia’s Roma citizens and about the government’s 2006 programme statement remaining unfulfilled. In the case of Plavecký Štvrtok, the government’s only response to the concerns of the village citizens appears to be the offer of funding low-standard housing for Roma living in the settlement.

But the citizens of Plavecký Štvrtok have found a sympathetic ear among officials of the Slovak National Party (SNS), known for its hard-line attitude on Roma issues, who stated they support the village’s demolition plans. The vice-chairman of the SNS youth organisation, lawyer Martin Píry, offered his services to the mayor on April 8 and the offer was accepted. Píry is a state nominee in the Council of the Slovak Land Fund and the Sme daily reported him as saying that the first bulldozers could appear in the settlement in two months’ time - and that if the inhabitants show resistance, SWAT units should intervene.

And while NGOs fear that such a precedent could start similar ‘easy solutions’ elsewhere in the country, there is also another fundamental reason for worry, one alluded to by the citizens of Plavecký Štvrtok in their open letter:

“It’s no wonder when people like us, who are on the side of the law but despite that feel powerless and exposed to terror, fall back on the support of organisations as recently happened in Šarišské Michaľany [where the far-right Slovenská Pospolitosť organisation launched a raid against Roma], because we are living now and we want to live in dignity and decency now, not in 30 years when a plan of some long-term conception for solving this issue starts working.”