A LONELY man, who just happened to be sitting there and playing his guitar, as if only for himself. That was how one could describe the very start of the long-awaited concert by the flamenco guitar virtuoso, Paco de Lucía, in Bratislava’s sold-out National Tennis Centre. 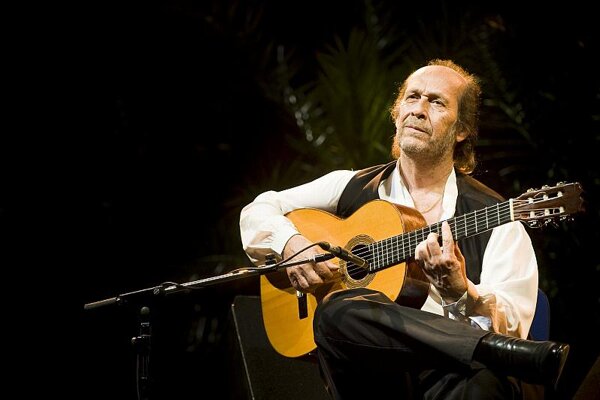 A LONELY man, who just happened to be sitting there and playing his guitar, as if only for himself. That was how one could describe the very start of the long-awaited concert by the flamenco guitar virtuoso, Paco de Lucía, in Bratislava’s sold-out National Tennis Centre.

But even alone on the stage, he caught the attention of the audience immediately, and from the very first moment showed his unique mastery of the Spanish guitar.

Paco de Lucía is a legend in his genre – flamenco. Born in the Andalusian province of Cádiz, he started his career as a child. At the age of 16 he travelled abroad for the first time with his brother, a flamenco singer, as a member of the touring company of José Greco, and at the age of 18 recorded his first album.

That was in 1965. Soon afterwards, his fame crossed the borders of Spain, the homeland of flamenco. He has been praised for bringing elements of jazz improvisation into the genre and for enriching flamenco with new instruments, such as the cajón, a Peruvian box drum.

This concert was his first in Bratislava for more than 20 years and formed part of his 2010 European tour.

The image of a lonely man at the start of the concert was soon forgotten by the audience once his companions entered the stage: guitarist Nino Josele, bass player Alain Pérez, Antonio Serrano on harmonica, Pirana on percussion, singers Cristo Heredia and David de Jacoba, and the dancer Farru, who saved his brilliant art for the final part of the concert. Because, flamenco is not only the sound of the guitar.

As Paco de Lucía himself stressed several times in interviews with journalists, the guitar is there mainly to accompany the singers, who in their tearful voices sing the sad songs of lone desperados.

And when Farru stepped up to dance in the fast yet blue rhythm of their songs, one didn’t even need to close one’s eyes to see the dusty roads and the hot curling air of Andalusia, and smell the scents of the sea in the distance.

According to the portal flamenco-world.com, Paco de Lucía will continue playing concerts around Spain after the end of his European tour in May, and is then likely to embark on a world tour including the United States, Japan and Latin America, before his rumoured retirement from the stage.

The portal also reports that Paco de Lucía is working on his latest, long-awaited album which, according to sources close to the artist, might be released in around summer 2011.

The genial composer recently gave an explanation for the prolonged period – of more than five years – without a new album, in an interview for the television Intereconomía channel:

“It takes me so long to make a new album because I try for there to be something new; not just a new theme, but rather a new idea.”