We live in times when the power and mission of print media is being very intensively debated; we pursue the gigantic challenge of how to effectively combine online and print reporting while ensuring that the good old newsprint version – with its feel, smell and even smudges of ink that often mark readers’ fingers after leafing through its pages – survive. 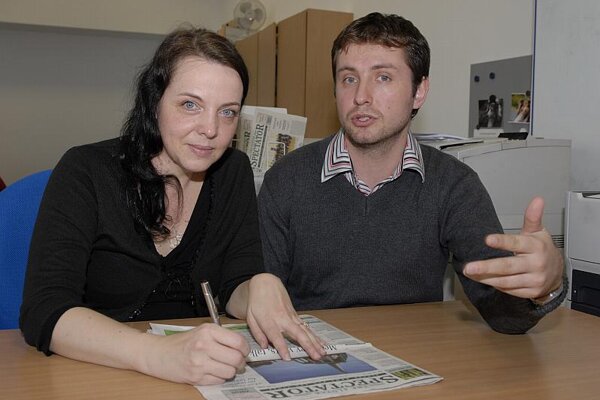 We live in times when the power and mission of print media is being very intensively debated; we pursue the gigantic challenge of how to effectively combine online and print reporting while ensuring that the good old newsprint version – with its feel, smell and even smudges of ink that often mark readers’ fingers after leafing through its pages – survive.

At The Slovak Spectator we look ahead with cautious, but wide-open, eyes so that we do not miss a single opportunity to keep pace with technological progress. Though we are still far from the moment when the editor’s holographic image appears on the subscriber’s palm and reads the up-to-the-minute news to them, when we compare The Slovak Spectator back in 1995 with today, it is obvious how much we have changed – when we have daily or more frequently updated news on our webpage and as we regularly focus on further refining our electronic presence.

We also live in times when falling revenues from advertising boost the temptation by some media outlets to remove what are called ‘ethical barriers” to allow more cash to flow into the business – while not fully realising that this route will be the way to gradually drowning the morality of their enterprise. At The Slovak Spectator we know that we will not start down that path.

This newspaper was established 15 years ago at a time when Slovakia stood at the verge of international isolation and there was an immense and urgent need for a vehicle that could speak to an international audience who did not speak Slovak and required regular, in-depth news produced under what we might call Western standards. Today, we have a broader audience – as we are writing for many Slovaks who fully understand English – while preserving our good tradition of addressing a truly diverse, open and multicultural group of readers.

The Slovak Spectator has been put together by people who brought their experiences from the United States, Canada, the Netherlands, Poland, the United Kingdom, Hungary, Denmark and Belgium, to mention just several of the places where past or present employees of our publishing house hailed from or studied.

Our current editor is an ethnic-Hungarian Slovak, educated in the United States, completely trilingual, who has been writing in English for the past two decades. As the current publisher, I have walked up nearly every single step of this business: from being an accounting assistant to head accountant, from being an advertising assistant to leading our advertising efforts, from becoming public relations executive to accepting the position of publisher.

We are fortunate here at The Slovak Spectator to be part of the Petit Press publishing house, one of the strongest harbours in Slovakia today for media enterprises to be docked within.

The Slovak Spectator is celebrating its 15th anniversary thanks to people who had vision, who believed that journalism serves a moral dictum but also understood that publishing cannot escape the tough rules of the market. They always had to balance on that tightrope like skilled acrobats, knowing they needed to make it across the wire to the other side every single week, month after month, without losing sight of their core values. We, the current team at The Slovak Spectator, aim to be just as skilful as our predecessors