Foreigners seeking adventure in a post-communist country; young journalism students and graduates wanting to get in touch with the English-speaking world; experienced writers; visionaries hoping to help Slovakia on its way to becoming a free country. 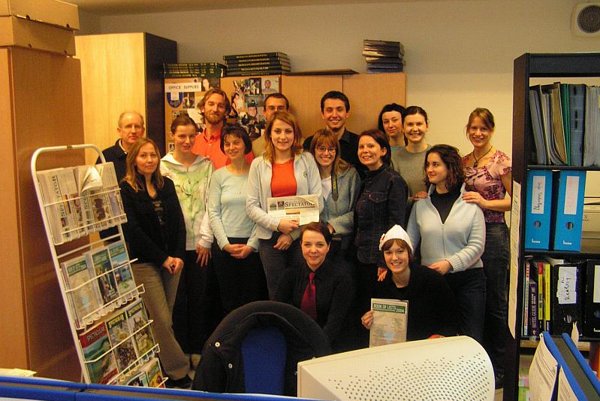 Foreigners seeking adventure in a post-communist country; young journalism students and graduates wanting to get in touch with the English-speaking world; experienced writers; visionaries hoping to help Slovakia on its way to becoming
a free country.

These are just some of the descriptions one could apply to members of The Slovak Spectator family: those who have worked for the publication in the distant or more recent past, and who regularly or occasionally still reach for a copy of the newspaper when they get chance.

While some of them left the newspaper trade when they left The Slovak Spectator, others still shine brightly in the journalistic firmament, both in Slovakia and elsewhere.


“To this day, when people ask me how I got into journalism, I tell them proudly that it all began when I saw the paper at a newsstand one day in Bratislava and called the editor, Tom Nicholson, to offer my services,” said Chris Togneri, the author of the 7th edition of the Spectacular Slovakia travel guide and a former writer for The Slovak Spectator. “That phone call led to a meeting in a pub, which led to a job, which led to four of the greatest years of my life.”

Togneri left The Slovak Spectator in 2002 to study at the journalism graduate programme at the University of California, Berkeley – “a highly competitive programme, to which I was accepted because of my unique experience with the Spectator”. He later took a job as a crime reporter with the Modesto Bee newspaper in California’s Central Valley and then moved to the Pittsburgh Tribune-Review, where he’s been working as a general assignment reporter since 2007.

Togneri is far from being the only former staffer for whom The Slovak Spectator was their first taste of journalism, and thus a great learning experience. Lukáš Fila, who is now deputy editor of the major Slovak daily Sme (published, like The Slovak Spectator, by Petit Press), also started at the paper, later moving on to work for the publishing house as a project manager, then marketing director and, in 2006, as deputy editor at Sme.

Fila said one of his most memorable moments was an interview with Vladimír Mečiar which he did together with the then editor-in-chief Tom Nicholson after only about two weeks on the job.

“I just couldn’t believe it was actually him I was talking to,” said Fila, who began contributing to The Slovak Spectator again in 2009 with his ‘Word of the Week’ opinion column.

“Without getting into the details of her private life, let me just say that The Slovak Spectator was practically her surrogate family,” Sheehan said. “The Slovak Spectator’s founders became her caring community and trained her to become a great reporter. She went on to be a very successful grown-up.”

“From a professional standpoint, the best part was getting to meet and interview people I had no business interviewing – government ministers, for instance,” said Matt Reynolds. “It was learning on the job and it was great.”

Reynolds remained in journalism for a while after leaving The Slovak Spectator, freelancing for, among others, The San Francisco Chronicle and New York Times, and spending a year as a news reporter at The Prague Post. Later, as a Reuters reporter, he moved to Warsaw where he quit reporting to make what he calls “a documentary about a band of misfits searching for the world’s best Buffalo chicken wing”, a film he shot with a group of Slovak filmmakers. He now lives in New York City, working on the movie and his master’s degree in media studies at the New School.

“The Spectator naturally enabled me to make friends outside the paper as well, and meet interesting people who shared their powerful stories with me,” said Zuzana Habšudová, who was a culture writer for The Slovak Spectator and who presently lives in Aberdeen, Scotland. “I talked to renowned artists like Miroslav Cipár and Peter Kľúčik, whose book illustrations I had already admired as a child, and I interviewed Milan Lasica, a humorist I like and respect very much. I listened to people who talked about wars, the Jewish and Roma holocausts and the difficult times under the communists, as well as those who lived on the edge of poverty.”


The 15 years since the first issue of The Slovak Spectator appeared on newsstands have been turbulent, economically as well as politically. The Slovak Spectator’s reporters have witnessed Slovakia’s painful transition to democracy and a market economy – a process which involved numerous exciting news stories that needed to be covered.

Chris Togneri remembers December 2000, when masked commandos blew in the front door of former prime minister Vladimír Mečiar’s villa in Trenčianske Teplice in order to arrest him on charges of fraud and abuse of power.

“This was a stunning turn of events,” Togneri said. “And for me, it was a unique opportunity because the editor-in-chief, Tom Nicholson, was on vacation, leaving editorial control of the paper in my hands. I recall watching the news on TV, dispatching a reporter to Trenčianske Teplice, scrapping everything we had planned for the front page of the paper, and mobilising the editorial staff to cover every possible facet of the arrest. I’ll never forget how we all pulled together, worked long hours without a complaint, and eventually produced page after page of coverage, all of it adding up to one of the finest issues the paper ever published.”

Jana Sheehan also recalled the 1990s, saying that it was a relief for her to leave the position of political reporter at The Slovak Spectator in order to become a Prague-based reporter for Dow Jones Newswires, and not have to witness the at-times bizarre reality created by some of the men and women active in Slovakia’s politics.

“Writing about Slovakia was often painful and infuriating – [it was] hard to remain an independent observer,” she said.

Although The Slovak Spectator doesn’t deal extensively with world news, some former staff members recalled the September 11 terrorist attacks as a memorable moment during their time at the newspaper, which in 2001 was largely staffed by Americans.

“I remember having one of the weirdest interviews of my eight-year long career at The Slovak Spectator,” said Martina Jurinová, a political reporter at that time. “Speaking to the education minister and watching CNN at the same time – we were both so shaken by what we were seeing that our interview became totally secondary. Then I remember the empty editorial office when I returned from the interview: all the expats that worked at The Slovak Spectator at that time – Matt, Chris, Ed, Tom – they had all gone home to watch CNN and connect with their families and friends in the US. I remember the strange feeling of emptiness in the office and the total disbelief at what was going on.”

The coverage of what is still today remembered as one of the greatest, and certainly the most celebrated, successes of Slovak sport – Slovakia’s historic victory in the 2002 Ice Hockey World Championships – is one of Tom Nicholson’s fondest recollections. Then a reporter for The Slovak Spectator, Nicholson had come to Slovakia from Canada, the cradle of ice hockey. He never misses an opportunity to recall the victory and the atmosphere it created, as Slovaks cheered in their millions for the country’s all-conquering hockey players.

At the time of the championships, in May 2002, Chris Togneri was travelling around Slovakia to write Spectacular Slovakia. This gave him the chance to watch each game in a different part of the country.

“At every stop I found the same thing: large groups of Slovaks gathering in public places to cheer on the team,” Togneri said. “With each victory, the country’s confidence grew, as did its sense of solidarity. It was touching and amazing, and not just on the ice. I’ll never forget watching the way everyone came together to root for the boys, how people wept openly after key goals, and how hundreds of thousands of people spilled into the streets all over the country to celebrate the final victory.”

“To cap it all off, the scene at SNP Square when the team came back to Slovak soil was fantastic. There were 50,000 people there! I remember my landlord telling me that not even when Communism fell did that many people gather on SNP. Without a doubt, that was my most memorable memory of working for the Spectator. Indeed, it was one of the greatest times of my life.”


One thing that makes the work of The Slovak Spectator’s journalists different from that of others working in the Slovak media is the paper’s lively relationship with the diplomatic community – since Bratislava-based diplomats are among the paper’s most faithful readers.

Ivan Remiáš, a former political writer for The Slovak Spectator who continued his career at The Prague Post, contributed to Time magazine and the International Herald Tribune and is now involved in a range of activities from advertising to film, tells a peculiar story concerning the British ambassador, whom he quoted commenting on Slovakia fulfilling EU integration demands.

“I heard him say on the phone: ‘It’s another chicken in the box’,” Remiáš said. “Not wanting to look stupid, I thought without asking it was a funky phrase that kind of felt right in the story.”

He was also encouraged to use it by the native-English-speaking editor, who himself took the phrase and based that issue’s editorial around it.

“After it was published, the ambassador called our office yelling ‘I didn’t say chicken in the box, I said it’s another trick in the box!!!’,” Remiáš said with a laugh, adding that when leaving his posting some time later, the ambassador gave him a small paper box with a small fluffy chicken in it as a farewell gift. He keeps it as a memory of The Slovak Spectator to this day.