I knew things were going well when, less than 20 minutes after I had wandered into Trenčín, the dancing girls turned up. 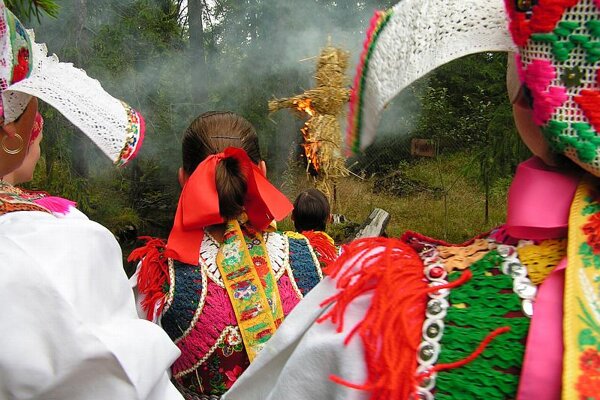 I knew things were going well when, less than 20 minutes after I had wandered into Trenčín, the dancing girls turned up.

Now, when half a dozen pretty girls in short skirts and heels unexpectedly start high-kicking their way towards you down the street on a Sunday afternoon I think you may fairly regard it as a good omen. And so it proved. Not that writing Spectacular Slovakia was dancing girls all the way (though full marks to Trenčín for an outstanding start). There were, for instance, none at all in Lučenec one Saturday night about three months later. And so, after I had exhausted all the town’s weekend entertainment options (which is to say the Chinese takeaway had closed), I retired to my ever-so-slightly seedy motel to record the day’s events.

I could have written about the man I had met that morning, who after showing me his collection of 2,000 (count ‘em) cow bells, offered to perform the Trumpet Voluntary on his woodwind walking stick. Or the stunning countryside of central Slovakia I had driven through that afternoon. Or the museum I had visited which celebrates one of the birthplaces of Slovak-language education: a school that, in the second half of the nineteenth century, had been a brave bet by the patriots who established it.

But all that would have to wait.

Instead, I felt impelled (I blame the seafood chow mein) to commit to my wheezing laptop the memory of a roadside stop in a small town that struck me as appealingly random, yet curiously typical: the deserted streets; the socialist mural on a town-centre panelák; the darkly furnished, unlit interior of the local hotel and its unforthcoming staff; the apparently futile search for a cup of coffee; the single open cukráreň (sweet shop) at which the only other patrons were necking beer and borovička (and presumably waiting for the pub to open); the strange substance, contained in seemingly every cake on sale, which passes for cream in the parallel universe of the Slovak cukráreň. There were no dancing girls here either. But I felt – and still feel – a perverse fear that such places are about to disappear.

Most things about Slovakia I liked a lot. Folklore is not normally my cup of tea but the performances, which I got to see and hear performed live by some excellent musicians and dancers, were impressive. Slovaks are rightly proud of their musical heritage. However, it seemed to get very little airplay. Instead, the radios in most people’s cars, in a majority of long-distance buses, and in shops, post offices, restaurants and hotel lobbies country-wide, seemed to be permanently tuned to one of five or six indistinguishable and unutterably bland pop music stations.

On one Sunday morning drive across southern Slovakia I suggested to my travelling companion that some classical music might be a pleasant accompaniment to the beautiful scenery. This was not possible, I was told, because Bubble Gum FM was the only station with traffic reports.

I stared ahead at the empty road, bit my tongue, and watched the mist rise from the rolling hills of Hont serenaded by Shakin’ Stevens. Or it may have been Rick Astley: I now forget.

Much of the rest of my tour of Slovakia’s mediaeval wonders was accompanied by a soundtrack consisting of Kylie Minogue B-sides, Katy Perry’s warbled revelation that she had ‘Kissed a Girl’, and Starship’s insistence that they had ‘Built This City on Rock and Roll’.

There is perhaps only one auditory experience worse than listening to Slovak pop radio, and that is listening to me sing. This was the unhappy lot of a group of Russian travel agents with whom I toured Žilina Region.

On our final evening together, after several days of visiting castles, limestone caves, folk museums and thermal baths, the Russians decided it was time for a knees-up – and that the angleechanyan would be contributing to the evening’s entertainment.

I am fairly sure that ‘Jingle Bells’ was not the ‘traditional English song’ they were expecting, especially since it was September. My excuse was that an unseasonal snowstorm during our trip had got me in a Christmassy mood. The pathetic truth was that this was the only song to which I could recall even half the lyrics (an attempt to find the words to Monty Python’s ‘Always Look on the Bright Side of Life’ via the hotel’s flaky internet connection having failed). I was not invited to perform an encore. Bad music also played a part in my encounter with one of Slovakia’s leading extremists. Not that I realised when we met that his politics were somewhere to the right of Radovan Karadžić’s.

Instead he was introduced as the tourist representative of a small village with a very pretty church. After greeting me warmly and providing a guided tour of the church, he presented me with a CD of his songs.

It was only months later that I spotted his name among a list of prospective candidates in Slovakia’s presidential election. Further enquiries revealed that he was an extreme-nationalist politician who had become notorious in the early 1990s for his hateful rhetoric directed against Slovakia‘s neighbours and minorities.

I had listened to the CD a couple of times afterwards (passable, though more bar-room Sinatra than Pavarotti), blithely unaware that the lyrics were calling for the expulsion from Slovakia’s virgin soil of ethnic pollutants such as myself. Since I suspect he did not have a very well-developed sense of irony I still wonder why he gave it to me.

Crypto-fascists aside, one thing which I really appreciated about Slovakia was the accommodating atmosphere in which I travelled.

‘Welcoming’, though a tempting cliché, would be the wrong word to describe the average Slovak in the street. This is not a criticism: welcomes, as practised in other countries, can be double-edged.

For instance, you will rarely be assailed by anyone trying to sell you things; you will almost certainly not be hassled for a bribe, or even a tip. In fact, as long as you don’t do anything really stupid Slovaks will generally leave you alone.

This lack of demonstrativeness can sometimes be disheartening, especially if you travel alone and spend one too many mealtimes trying vainly to wring a smile out of waiters or waitresses. But on the whole it is liberating.

It was tremendously easy – the (surprisingly low) language barrier notwithstanding – to get around in Slovakia. With the possible exception of one occasion when a guard threw my bicycle out of a train (directly at me, or so it seemed), the service throughout my travels was unobtrusive and efficient. Good food and drink was almost universally available, along with clean, reasonably priced accommodation. Some things didn’t look as though they should have worked, but almost everything did. Hardly anyone made a fuss.

The pleasant exception to this rule was anyone who was expecting me. My contacts in the places I visited were extremely hospitable, and touchingly proud of their homeland. It was hard not to share their enthusiasm.

During a visit to eastern Slovakia, I was taken to Zemplínska Šírava, a large lake and holiday destination. On a sunny afternoon, after a local dignitary had plied me with one too many slivovicas, it was decided that I should attend the local folklore festival. I was given a front-row seat at this outdoor event, now branded ‘international’ (not in my honour, as it turned out; a band of musicians had turned up from Poland).

My presence was announced from the stage, and for one awful moment a ‘Jingle Bells’-style moment threatened to dawn. Mercifully for everybody involved I managed to convince the man with the microphone that, despite what he had been led to believe, I was not some sort of guerilla morris dancer, and disaster was averted.

As I relaxed I realised that my local travelling companions were having a whale of a time, and so was I. Now all I had to do was write about it. Despite my proven lack of skills in the harmonics department, I could see it was going be hard not to sing Slovakia’s praises.