NGOs: Roma are worse off

A WALL built to separate a Roma settlement from the village of Ostrovany in eastern Slovakia last year and the recent initiative taken by local authorities in the western Slovak village of Plavecký Štvrtok to have a nearby Roma settlement bulldozed do not mesh with assurances given by the state government that the problems of Roma living in settlements in Slovakia are gradually being solved. 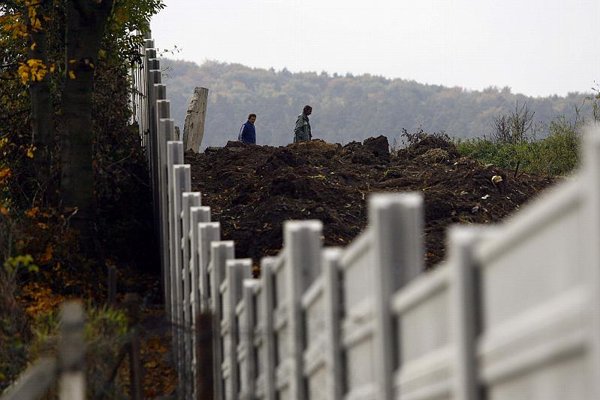 The wall in the village of Ostrovany. (Source: Sme - T. Somogyi)
Font size:A-|A+

A WALL built to separate a Roma settlement from the village of Ostrovany in eastern Slovakia last year and the recent initiative taken by local authorities in the western Slovak village of Plavecký Štvrtok to have a nearby Roma settlement bulldozed do not mesh with assurances given by the state government that the problems of Roma living in settlements in Slovakia are gradually being solved.

Non-governmental organisations are continuing to criticise the government of Prime Minister Fico for failing to develop solutions for the problems of Roma, many of whom live in poor conditions in segregated settlements, mainly in eastern areas of Slovakia. Very high levels of unemployment in these communities along with little success in eliminating educational segregation of Roma children are coupled with rising unrest among the majority population who, fuelled by extremists who have organised several anti-Roma rallies since mid 2009, say they feel threatened by criminality spreading from the settlements.

INEKO, an economic thinktank which has been evaluating the success rate of the current government in fulfilling its 2006 programme statement goals, stated that the government has not kept its promise to foster the integration of Roma citizens into society and increase the quality of their lives in Slovakia. INEKO also pointed to the rising tensions between the majority population and Roma residents.

According to Laco Oravec from the Milan Šimečka Foundation, the current government has continued various programmes that existed before the start of its term but that many of these programmes were left to their own devices instead of being improved or made more systematic and that has led to deterioration in their effectiveness. He mentioned as an example a programme for Roma teacher assistants, whose numbers have been dropping ever since the applicable legislation was changed. Likewise, Oravec said that field social workers in the settlements have become seen as a financial and bureaucratic burden for the municipalities and for that reason many villages have withdrawn from this project.

“There were several promises [in the programme statement], including establishing an office for minorities, systematising field social work, building new social services facilities for people from marginalised Roma communities and similar,” Oravec told The Slovak Spectator. “None of these have been touched on in these four years.”

Oravec said the only thing that might be considered a success is the drawing of EU Structural Funds, since some €170 million has been allocated to Roma programmes from this EU source.

“But our main reservation is towards the fact that it took four years before things started moving,” Oravec said, adding that in a few months it should be clear which villages will benefit from projects funded in this way.

But Oravec stressed that the Slovak government should not rely only on European funds to tackle problems among Roma.

“We should know exactly what we want to achieve, identify the possibilities that the EU provides and accept an obligation to finance the rest from our own resources,” Oravec said, adding that EU funds should mainly be used to finance pilot programmes and once a programme proves to be working well the state should be ready to finance it from its own resources.

“There is a great ‘alibi-ism’ among [Slovak] governments, as if they are saying that we shouldn’t pay for anything from our own resources for the Roma,” Oravec concluded.

Education is a sore point

One of the frequently-mentioned problems for Roma living in settlements is concern about the poor quality of education for children. In some cases parents do not encourage their children to attend school regularly or at all and in other cases Roma children are assigned to attend special schools for mentally-disabled students even though they do not belong in those schools.

Amnesty International Slovakia (AIS) recently drew attention to the latter issue and called on Vice-Prime Minister Dušan Čaplovič, whose responsibilities include human rights and minority issues, and Education Minister Ján Mikolaj to admit that segregation of Roma children in special schools or in separate classes is a continuing practice in Slovakia which must be solved by a thorough reform of the education system.

AIS reported alarming statistics about the education of Roma children in Slovakia – only 3 percent of Roma students graduate from a secondary school and Roma students account for 60 percent of those attending special schools for mentally-disabled children.

AIS director Branislav Tichý said that legislative changes, such as the ban on segregated schools which is now included in the education law, are positive but that almost nothing has changed in actual implementation.

Čaplovič reacted to the criticism from AIS with a written statement in which he rejected claims of segregation of minorities and stated that he always took action against incidences of segregation that he encountered. In his letter he defended the recently-floated idea of boarding schools for Roma children, a proposal which has been much criticised by many NGOs as well as by some opposition political parties.

“It’s an effort to help the children change from the unfavourable lifestyle of their parents and to show them that in order to be dragged out of poverty they need education and getting to know other people and also a lifestyle other than their own,” Čaplovič’s letter states.

The Slovak Spectator contacted Čaplovič’s office for more details and comments but was told the vice-prime minister was busy. There was no response to questions submitted to him for this issue.