David John Wingell - The life and death of an ex

DAVE Wingell passed away on April 19 after a two-year battle with cancer. He was 45. 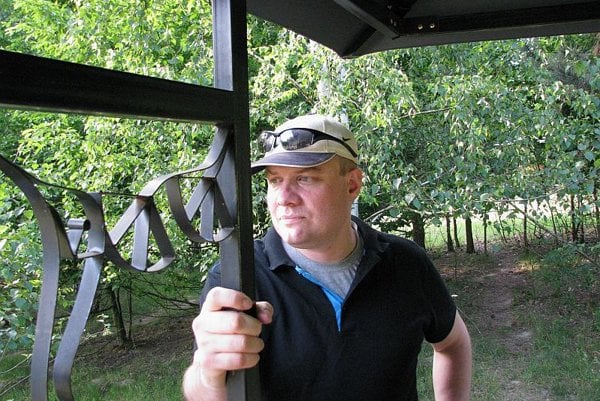 DAVE Wingell passed away on April 19 after a two-year battle with cancer. He was 45.

The main thing about Dave, and one of the first things he would tell you, was that he had four children. The rest was window dressing - the Toronto Catholic upbringing, his departure for Slovakia in 1991, the IT gadgets he later sold. His kids were his identity. Now those same children are essentially homeless.

I know that thousands of people die from cancer every day, but the Wingells' fate has a sense of Biblical austerity. They lost their house after Dave got sick and was unable to pay the mortgage. Now they live in a tiny flat in Ružinov, dependent on the generosity of friends. Even if Dave's wife Broňa could work, the bank would garnishee her wages to defray what it lost on their misfortune.

Dave had a talent for friendship. The first time he and his family came to our house, five years ago, I might have been a little quick to open the wine, and Dave noticed my eagerness, a grin splitting his red cheeks.

"Honey, I knew these were our kind of people," he said to Broňa, and our eyes met over the counter in a kind of recognition.

I know Dave sometimes found his own gregariousness a burden, especially on returning weary from another business trip to Serbia and the inevitable boozy negotiations. But he was a leopard, and those were his spots. A few months after we met the Wingells, the water pipes to our house froze, and they invited us to stay for as long as we needed at their rented place in Senec. It had four storeys, connected by stairs out of a Harry Potter film, and we were lodged in the attic. It was a loud, chaotic week, with kids under every elbow, but we left elated by their happiness, and resolved to have another child of our own.

Two years ago Dave visited the doctor for a checkup. He was diagnosed on the spot with colon cancer, and was operated on within a fortnight. It was a crippling blow, made worse by the fact that Dave and Broňa had just bought a house near Bratislava at the height of the real estate market with a six million crown uninsured mortgage.

In the months that followed, the Wingells seemed cursed, their happiness routed. The roof on their new house sprang a leak, and they discovered that the seller had seriously misrepresented a "renovation". Their van was a write-off when the engine seized after an oil leak. Broňa's mother was diagnosed with cancer. Then their youngest child was diagnosed with a rare neurological disorder similar to autism, making it impossible for Broňa to work. Then Dave's cancer returned.

I wish Dave's end had been quick and painless and dignified. But it wasn't.

The tumours in his belly caused a fistula to open, a wound that grew to 15 centimetres. He tried hard to keep his spirits up, but it was tough in that hospital, Alžbetka in downtown Bratislava. Visitors had to summon the nurses, who would be chatting in the hallway and ignoring Dave's rings. His surgeon steadily refused to visit him, saying there was nothing that could be done about the fistula. The nurses acted as if the tricky job of changing the colostomy bag was nothing to do with them, so Dave was left to totter off to the bathroom on his skinny shanks and do it himself. This had nothing to do with the underfunding of health care in Slovakia. This was unvarnished indifference to the suffering and dignity of another person.

"I don't want to die here," Dave told me one afternoon. But of course he had nowhere else to go. To get his Canadian health insurance back, he would have had to live there for three months with no coverage, which was impossible with a serious illness requiring expensive treatment.

On a winter morning he was moved to another hospital in the Kramáre district, where he would die. His end was distressing, because he fought it so hard. At 45 his body rejected death, and pain tugged his face into new contours. "I'm not going anywhere just yet" were the last words I heard him speak. He reached out for a hug, and we clung to each other on his humid hospital bed.

Now that he is gone I feel a mixture of relief that he is out of his pain, and sadness at the catastrophe, the relentless misfortune that killed him and left his family homeless and destitute. As if his pride in his children had been a sin, and his own life insufficient to atone for it.