INTERNATIONAL studies rank water transport as having some of the best development potential for the shipment of goods. It is cheap and its environmental impact is the lowest of all kinds of transport. Even though it is relatively slow, and thus not suitable for shipment of all kinds of goods, the recent trend towards multimodal transport and containerisation of cargo considerably extends the list of goods suitable for transportation by ship. In Slovakia, water transport has great potential since neither current existing capacities nor opportunities for new waterways have so far been fully utilised. 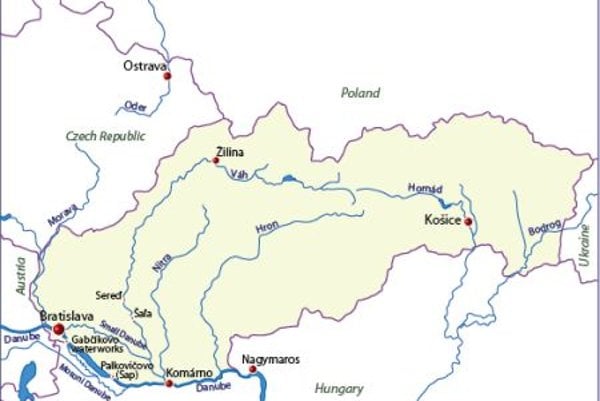 INTERNATIONAL studies rank water transport as having some of the best development potential for the shipment of goods. It is cheap and its environmental impact is the lowest of all kinds of transport. Even though it is relatively slow, and thus not suitable for shipment of all kinds of goods, the recent trend towards multimodal transport and containerisation of cargo considerably extends the list of goods suitable for transportation by ship. In Slovakia, water transport has great potential since neither current existing capacities nor opportunities for new waterways have so far been fully utilised.

Slovakia has, thanks to the Danube River, water-borne access to the North Sea as well as the Black Sea. Since the completion of the Main–Danube canal in Germany in 1992, the river has become part of a trans-European waterway, labelled Corridor VII by the European Union, from Rotterdam on the North Sea to Sulina on the Black Sea, a route of about 3,600 kilometres.

“Water transport in Slovakia is in a significantly disadvantageous position compared to other countries,” Juraj Bohunský, the spokesperson of Slovenská Plavba a Prístavy (SPaP), told The Slovak Spectator. SPaP is the dominant water transport and logistics company in Slovakia, operating in ports on the Danube River in Bratislava and Komárno. “The biggest disadvantage of Slovakia is that the Danube flows through Slovakia for only a very short part of its length – only 30 kilometres. Slovakia shares the rest of its 172-km long stretch either with Austria or Hungary.”

In Slovakia no production companies use water transport and thus SPaP’s activities are limited to the import and export of goods to and from the ports of Bratislava and Komárno. In all other countries which lie in this corridor the situation is completely different, according to Bohunský. He used as an example Germany, where all important steel-making and other production companies are sited on the Rhine, using water transport to the maximum extent possible, not only because of its low price but also because of its minimal negative impact on the environment.

“Thus it is obvious that water transport in Slovakia operates under different conditions, even though it can offer within its portfolio of activities economically advantageous and environmentally ‘cleaner’ transport compared to other kinds of transport,” said Bohunský.

In spite of this current situation, experts see potential to use the Danube more for freight water transport.

“This waterway has already been built and it is enough to maintain and modernise it, and above all use it within trans-European multimodal transport corridors,” Erich Píš from the department of inland water transport research at the Transport Research Institute, told The Slovak Spectator.

While Slovakia’s mountainous geography does not favour water transport in many areas, the potential of Slovak waterways in other places is not used at all. The Váh River, which runs through Slovakia for the whole of its length, also has significant potential for water transport.

“Out of the other prospective waterways I would mention a multimodal corridor, part of which would connect the Váh with the Oder River and thus connect Slovakia with the Baltic Sea,” said Píš. “Plans to make the Váh navigable are already 200 years old, if I do not mention shipment of goods by raft, which has existed for centuries. Basically, the plan is to make the Váh navigable from Komárno, where the Váh empties into the Danube, up to Žilina. Afterwards, a canal joining the Kysuca and Olša Rivers would enable water transport up to the Oder in Poland, via the Czech Republic.”

This would make the Váh part of a network of European waterways linking the Baltic Sea, the Danube and the Adriatic Sea.

So far, the first phase of the project, to make the 75km-long stretch from Komárno to Sereď navigable, has been completed. It was opened in 1997, according to Píš.

There were already some trials to use the stretch from Komárno to Šaľa, where a chemical company is based, to transport synthetic fertilisers to a customer in Germany, according to Bohunský. But due to the insufficient depth of the Váh basin at its confluence with the Danube these efforts ended in failure.

Slovakia had originally hoped to solve the problem of low water levels with the Gabčíkovo-Nagymaros twin-dam project on the Danube, and specifically with the Nagymaros dam in Hungary.


“However, this dam has not been built so far,” said Bohunský, adding that as a result the Váh’s water level has not been raised. “As a consequence, freight water transport between Komárno and Šaľa has vanished.”

The missing Nagymaros dam is also causing problems on the Danube.

“The Nagymaros dam should have solved the question of the navigability of the Slovak section of the Danube,” said Píš.

In the past, the whole Slovak part of the Danube, from Devín to Chľaba, which is 172 kilometres long, was only partially navigable. In this section, the river enters a so-called inland delta after it breaks through the Carpathian Mountains and flows into the Podunajská Nížina lowlands, Píš explained. The inland delta is created by the Danube and its tributaries, of which the Small Danube and Mošoni Danube are the biggest. In the main bed the river has shallows which prevent barges from being loaded to full capacity (i.e. a draft of 2.5 metres) throughout the year. When sailing through such places vessels must be partly unloaded. According to Píš, these shallows are removed by dredging the riverbed, but this is only a temporary solution.

“The Nagymaros dam should have solved this problem by swelling the Danube’s water level up to Palkovičovo (Sap), as the Gabčíkovo dam has done on the section from Palkovičovo to Bratislava,” said Píš. “Construction of the Nagymaros dam would solve the quality problem of the Danube waterway.”

However, only the Slovak – Gabčíkovo – part of the whole twin-dam project was constructed, while Hungary, though bound by an international agreement and the verdict of the International Court of Justice in The Hague to build its part of the project, is taking a very vague stance on the whole problem, according to Píš. He added that the problem of the navigability of the Danube on this section has been open for more than 10 years.