THE MUNICIPALITY of Andač near Nitra was the scene of an equine drama on the night of April 14, after a riding horse fell into an empty well shaft and had to be winched out following several hours down the hole. 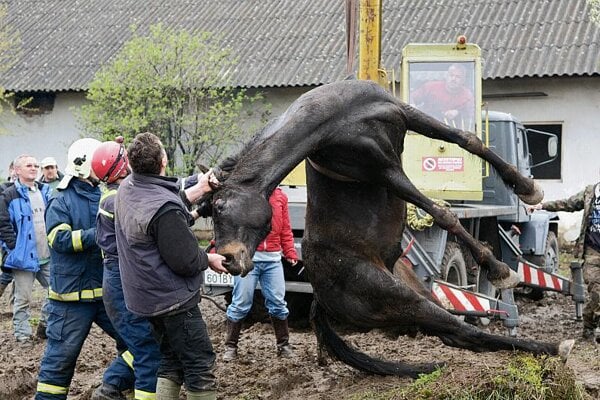 Grizu is hoisted out of the unused well. Despite his ordeal, the horse survived. (Source: TASR)
Font size:A-|A+

THE MUNICIPALITY of Andač near Nitra was the scene of an equine drama on the night of April 14, after a riding horse fell into an empty well shaft and had to be winched out following several hours down the hole.

It is believed that the horse, named Grizu and weighing in at a hefty 800 kilograms, fell into the 12-metre-deep, 1.2-metre-wide well while foraging for food – and remained trapped until he was found early the next morning by farm employees who had been expecting to feed him, the local Nitrianske Noviny newspaper wrote.

They called a vet who went down into the well and sedated Grizu, after which the fire brigade sent one of their men to secure straps under the animal. Firefighters then managed to pull the still-sedated Grizu out of the hole using a crane. He was immediately given first aid.


The early prognosis was not good: the heavyweight horse had spent several hours on his hind legs, almost motionless and in shock. Vets suspected internal injuries and fractures, the Sme daily wrote.

“He will get therapy for the shock, antibiotics against abrasions and minor wounds, and an infusion,” vet Martin Miňo said.

The horse’s owner, Katarína Žáková, believed that the 10-year old Irish hunter, whom she has known since he was a foal, would survive – but nonetheless feared the worse.

“He means a lot to me, he is my dream come true. He was born in Rimavská Sobota and after having trained him in Western riding, I plan to train him for hippotherapy. I only hope he has no internal bleeding; that he is only scratched and recovering from shock. He must have broken his fencing when he reached for grass – I have no other explanation. The well he fell into was secured and enclosed,” Katarína said.

The co-owner of the property, Jakub Ondra, said he would cover up the well completely or fill it in with concrete to prevent any repeat of the incident.

“We had to bring in a crane normally used on cars to save him. I am just keeping my fingers crossed for him,” the officer in charge of the rescue, Ľuboš Kriššák, said.

A week after the drama, Grizu was alive and doing well: he spent only two days in his stable before being let outside to graze.