Being a professional tourist

For six months in 2002, I had the best job in the world: As editor of the Spectacular Slovakia travel magazine, I got paid to travel around the country, soak in natural hot springs, hike (and stumble) down snow- and mud-covered trails, scale mountain tops and explore castle ruins, talk to friendly locals in every region, hike from one obscure village to another … and then write about it. 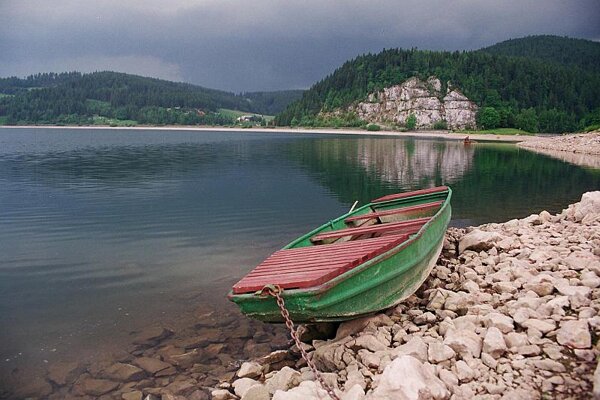 For six months in 2002, I had the best job in the world:
As editor of the Spectacular Slovakia travel magazine, I got paid to travel around the country, soak in natural hot springs, hike (and stumble) down snow- and mud-covered trails, scale mountain tops and explore castle ruins, talk to friendly locals in every region, hike from one obscure village to another … and then write about it.

It was the time of my life.

Eight years later, I sit in my house in Pittsburgh, Pennsylvania, flipping through the dog-eared pages of the culmination of my work: The Spectacular Slovakia 2002 travel guide. The editors of the latest version have asked me to write about my time with the magazine, from 2000 to 2002. And the memories are flooding back in.

I remember the first time I saw Bratislava.

In October, 1997 I sat in a bouncing Skoda, the red and beige castle floating on the horizon, as the driver zipped through the Austrian countryside towards the Slovak capital. I was 23. I’d never been out of America, and my excitement grew … until we took a sharp right and drove into my new home -- Petržalka, a bleak landscape of concrete blocks of flats, or paneláky, set in rows like 12-story tombstones looming over the southern banks of the Danube. This was not what I’d expected, and I wondered if I’d made a terrible mistake in moving to Slovakia.

Later that night, though, I left Petržalka on foot. Across the river, I spent hours walking the cobblestone streets of the Old Town. And I knew that I’d made the right decision after all.

I remember the first time I climbed Kriváň.

Standing at the top of the iconic High Tatras peak, I looked down at the rolling green countryside folding out below me in all directions, and for the millionth time I wondered: “Why doesn’t everyone know about this place?”

And I remember climbing Kôprovský Štít, a four-hour trek up steep serpentine trails. At the top, I found a nun -- in full habit and hiking boots -- sitting on a rock.

“What’s that?” she said, noting my look of bemusement. “Don’t tell me nuns aren’t allowed to climb mountains!”

At Čachtice, I tried to imagine where the Bloody Countess tortured and murdered all those poor girls. And I wondered if that crumbling tower over there might just be the tower in which the Countess eventually was imprisoned.

I remember Devín, looming over the Danube; Spišský hrad, the largest ruin in central Europe; and the line of castle ruins spanning the southern border, now mostly forgotten and overrun with vegetation, that decades ago guarded against Ottoman invasion.

I remember sitting in a tiny café in Humenné one lazy Sunday afternoon.

I ordered a beer and noted my surroundings: the rickety wood tables, the Slovak folk music on the radio, the crates of vodka stacked behind the bar, the sign announcing grog at 15 crowns a cup.

There was an old guy alone in the corner, smacking his lips over a beer and occasionally shouting out an affectionate comment to the waitress. She was an older woman with hair dyed bright red, and she placed a second beer in front of me with a grandmotherly ‘nech sa Vám páči’ (Let it please you). Then the man in the corner drained his beer, rose to leave, and sang out ‘dovidenia, Mirka, moja zlatá!’ (See you later, Mirka, my dear.)

I watched the scene unfold, and I thought to myself (as I wrote in the 2002 magazine):

“I could spend a whole afternoon in here. This is, after all, why I decided to travel: to sit off to the side and enjoy a foreign slice of real life. All the customers here know each other, everyone is on a friendly first-name basis, and I am thinking up excuses to miss my train back to Spišská Nová Ves. And halfway through my second beer that happy thought strikes me: I’m working right now! What a glorious job, traveling on someone else’s dollar through a largely undiscovered land rich in history, culture and natural beauty.

“Leaning back in my chair, I counted my blessings for the hundredth time on this trip, motioned for another beer, and decided that I could surely catch a later train.”

I hiked everywhere in Slovakia, mainly because you can literally hike everywhere in Slovakia. There were no fences marking property lines, and trails were mere suggestions. Indeed, while writing and researching the 2002 magazine, I often took off on foot from my flat and simply walked from one village to another for two weeks at a time. Then I’d find a train line, ride back to my home in Spišská Nová Ves, and write. Like I said: It was the best job in the world.

I remember falling down.

On a cold and rainy day in Sklené Teplice, I went face-first into a muddy pool, right in front of a family of hikers coming the other way. I stood, spat mud from my mouth and calmly explained: ‘Nebojte sa, viem čo robím. Ja som profesionálny turista!” (Don’t be afraid, I know what I’m doing. I am a professional tourist!)

I remember often being surprised: Like when I sat in a nearby pub after my stumble and waited for my bus back to Banská Štiavnica. Two local barflies, Ján and Gabo, joined me at my table. They noted my wet clothes and muddy hair, and astutely observed that I was going to catch cold if I didn’t warm up soon.

Their recommendation: A shot of slivovica, and a swim in a cave.

Yes, I thought they were insane. But I was having such a bad day, I figured it couldn’t get any worse. So I washed down the shot of plum brandy they ordered for me, then followed them down the road to Jaskynný Parný Kúpeľ -- a thermal hot spring in a local cave. And that is how I came to lean that Ján and Gabo are wise men. Very wise men.

I could go on, of course.

I could tell you about the castle in Trenčín, the main square in Bardejov, the ladders that carry hikers up and over waterfalls in Slovenský Raj (Slovak Paradise) national park.

I could tell you about the family of bears I disturbed while hiking in the Fatras, or the elusive chamois that grazed within 20 feet of me one quiet evening in the Tatras.

I could tell you about the old man in Čičmany, a tiny village of wooden houses painted with distinctive designs, who urged me to buy a piece of his wife’s embroidery so he could buy bread and milk. I bought a piece for 80 crowns. He invited me into his home and offered to feed me.

I could tell you about the all-night pub crawls I took with Tom Nicholson, the editor of The Slovak Spectator, and how we always ended up drinking way too much, and how he somehow always ended up paying for the whole night.

I could tell you about the month I spent each June sleeping on the floor in the Spectator offices as Martin Janoško – a gifted graphic designer – put the magazine together.

I could tell you how it broke my heart in the summer of 2002 when I decided to leave.

Today, as I sit here in Pennsylvania, I put down the magazine I edited, and I think about how I ended up in Slovakia, and how it changed my life. I moved to Bratislava to coach baseball, of all things. A year later, I was a business reporter for The Slovak Spectator. A year after that, I was editing the news and culture pages. A year after that, I wrote and edited my first Spectacular Slovakia travel guide.

Today I live thousands of miles away. I am married. I own a house. I work for a daily newspaper, the Pittsburgh Tribune-Review, in a major American city. My Slovak is fading.

One thing that hasn’t changed -- and won’t -- is that after all these years, I remain in many ways that wide-eyed kid travelling around Slovakia:

I am still amazed at what I’m seeing, and I am constantly trying to convince the people back home that this is the friendliest and most beautiful country in the world.