Battle is joined over cost of PPP projects

HIGHWAY construction is turning into one of the major political battlefields ahead of Slovakia’s general election, due in June. 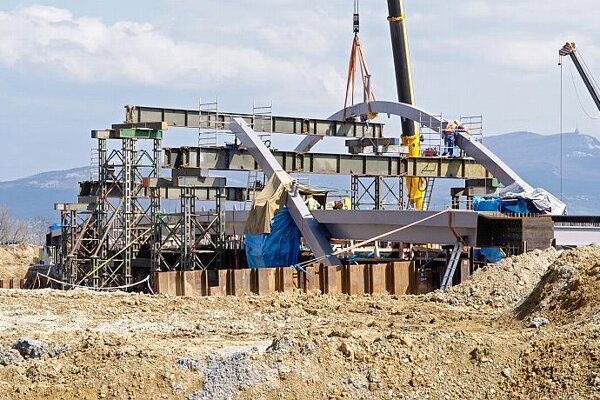 HIGHWAY construction is turning into one of the major political battlefields ahead of Slovakia’s general election, due in June.

It has been clear for some time that the Robert Fico government would wrap up its four-year term without completing the promised highway link between Bratislava and the eastern metropolis of Košice. Now the government is taking some pains to seal, as soon as possible, the so-called first package of public-private partnership (PPP) projects to cover 75 kilometres of highway between Martin and Prešov. It would be the final package to be closed, and put finances in place to complete the entire highway.

However, critics of the government’s strategy to build highways through PPPs say the first package is overpriced by €546 million and that the state would be much better off paying for highways through the state budget or by obtaining European Union funds.

However, it was not just the price tag that evoked questions but also the planned route of the highway. Brussels is already looking into concerns that the highway would cross protected natural areas and also negatively impact the quality of life of the citizens of the small village of Šútovo.

Among the leading critics of the PPP approach are the opposition parties.

In response, Prime Minister Robert Fico summoned a special cabinet meeting in April to task his ministers with analysing the “highly likely attacks” which he said centre-right opposition parties were poised to make on PPPs and the consequences these “attacks” might have on society. PPP projects are the only way to build highways in Slovakia, Fico told public-service broadcaster Slovak Radio on April 24.

The opposition Slovak Democratic and Christian Union (SDKÚ) said it would lodge criminal complaints against Fico, Transport Minister Ľubomír Vážny and Finance Minister Ján Počiatek on suspicion of abuse of power if they rush into signing the financial close for the first package of PPP projects. Former finance minister and SDKÚ deputy chairman Ivan Mikloš said that there are several other, more effective, options to build highways.

“The government of Robert Fico has privatised the highways because it is building highways almost exclusively through PPP projects, which are overpriced and moreover [the projects] last longer” Mikloš told a press conference on April 27.

The SDKÚ also suggested that the data that the Transport Ministry used to approve the scheme in cabinet had been manipulated. The Christian Democratic Movement (KDH) and the non-parliamentary Freedom and Solidarity (SaS) party also joined the chorus of critics, with the KDH’s leader describing the project as potentially the largest case of financial “tunnelling” (i.e. embezzlement) in the history of Slovak public procurement.

Minister Vážny dismissed the claims as political. However, doubts about the price of highway construction are also shared by the economic think tank INEKO.

“However, the Transport Ministry provided us, INEKO and Transparency International, with an analysis, also from March 2010, which served as a basis for the cabinet documentation,” director of INEKO Peter Goliaš told The Slovak Spectator. “According to this analysis, the PPP model is €546 million more expensive. How and when during its way from the Transport Ministry to the cabinet this sum was reduced remains a mystery for us.”

Goliaš also noted that on April 15, 2009, when the cabinet approved the construction contract, it was stated that the PPP project would be €115 million cheaper than alternative methods, according to another government document.

However, the Transport Ministry has also referred to the advantages of PPP projects, which the ministry says cannot be quantified, citing the higher attractiveness of the country and the region for foreign investors. The ministry also suggested that PPP projects could give a boost to the Slovak economy during the economic crisis and also make funds from the state budget available for other priorities during highway construction.

“I consider these benefits disputable, since they can also be achieved through classical construction,” Goliaš said. “As far as the availability of resources for different priorities is concerned, it is valid only if the PPP does not inflate the official deficit and public debt.”

However, according to Goliaš, not including the PPP in the public sector balance sheet only conceals the reality and worsens the long-term sustainability of public finances.

The economic weekly Trend also made its own analysis of the PPP packages and believes that the first PPP package will inflate the price of highway construction by about 40 percent. It calculated that the package is overpriced by €1.2 billion.

Trend even suggested that the looming losses for the state might be 15 times higher than those from the notorious and highly disadvantageous sale of Slovakia’s excess emission quotas to the obscure Interblue Group, at about half the price that neighbouring countries cashed theirs in for.

Minister Vážny rejected what he called such “speculations” and reiterated the ministry’s official figures, which suggest that the PPP approach will be only €29 million more expensive than classical financing.


The packages - and questions from Brussels

On April 27, Vážny expressed doubts about the state’s ability to wrap up the financial close of the first package, to construct 75 kilometres of the D1 highway between Dubná Skala (near Vrútky) to Svinia (near Prešov).

Of the three PPP packages, the so-called second package was the first to achieve financial close, in August 2009. The project covers the financing, construction, operation and maintenance of sections of the R1 dual carriageway, specifically the sections Nitra-Selenec, Selenec-Beladice, Beladice-Tekovské Nemce and the northern bypass around Banská Bystrica. The financial structure of the PPP contract, which will continue for more than 30 years, represents a total value of over €1.7 billion.

However, it wasn’t just this price tag that evoked questions but also the planned route of the highway. There were concerns that the highway would cross protected natural areas and also negatively impact the quality of life of the citizens of the small village of Šútovo.

The Directorate General for Environment has been approached by the European Bank for Reconstruction and Development (EBRD) in the context of a loan requested by Slovakia for the D1 highway project’s Turany-Hubová section, which would cross protected areas in the Malá Fatra, Veľká Fatra and near the Váh River, Joe Hennon, spokesperson for European Environment Commissioner Janez Potočnik, told The Slovak Spectator.

According to Hennon, the project had to be assessed to determine its compliance with EU legislation, in particular with the Environmental Impact Assessment directive, which is designed to assess the effects of certain public and private projects on the environment; and with the Habitats Directive pertaining to the conservation of natural habitats and of wild fauna and flora.

“It is the bank’s policy to ensure that sub-loans granted to the project comply with the Community acquis [i.e. body of law], in particular in the fields of environment and public procurement,” Hennon said.

Local media had reported that without EU consent, the European Investment Bank (EIB) would not provide Slovakia with the loans it had requested to fund the project. Meanwhile, on April 28, the EBRD approved a loan of €250 million to co-finance the D1 highway sections. Based on calculations by the Transport Ministry, the first PPP highway package will cost €9.13 billion over the course of its 30-year term. As this issue of The Slovak Spectator went to print EU approval for the EIB loan, of about €1 billion, was still unconfirmed.