WHEN police raided the Stupava residence of Radoslav Zimčák in the fall of 2008, they struck pay-dirt – their search turned up 18 forged personal ID cards, a laminating machine and a variety of spare photographs. The find confirmed what they had already come to believe, that an organised gang was impersonating absentee owners of land around Bratislava in order to get their hands on hundreds of hectares of prime real estate. 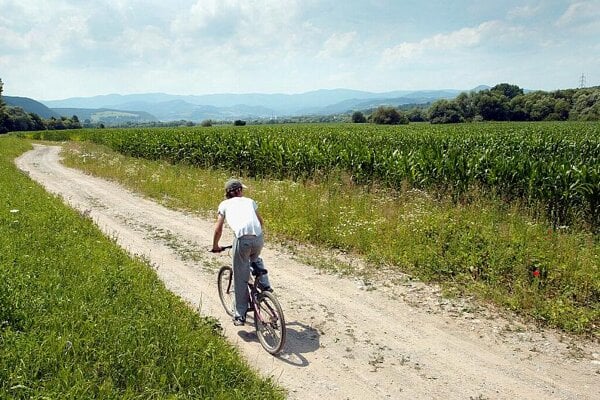 WHEN police raided the Stupava residence of Radoslav Zimčák in the fall of 2008, they struck pay-dirt – their search turned up 18 forged personal ID cards, a laminating machine and a variety of spare photographs. The find confirmed what they had already come to believe, that an organised gang was impersonating absentee owners of land around Bratislava in order to get their hands on hundreds of hectares of prime real estate.

Police believe the forged cards were manufactured by Zimčák’s accomplice, Stanislav Werškov of Galanta, and that some of them were used to cheat two sisters living in the Czech Republic out of 25 hectares of land zoned for building in the Devínska Nová Ves district to the west of the capital. The land – which is now registered to a certain Ľuboš Prikler, 27, of Bratislava, and is frozen under a court order – had a market value of €15 million at the time it was “sold” in 2007. Zimčák and Werškov were charged last year with fraud, racketeering and forging public documents.

The following year, the gang also tried to get their hands on another 68 hectares near the Volkswagen plant in Devínska Nová Ves worth over €30 million and belonging to the same sisters, Dagmar Štěpánová and Jana Braunerová. Forged ID cards in the sisters’ names were used, but the local cadastral office became suspicious of the deal in June 2009, and the land never changed hands. Zuzana Harculová, 28, of Malacky was charged in January this year with attempted fraud and tampering with public documents.

A similar fraud took place in 2007 in Rusovce, a Bratislava district on the south side of the Danube River. In one, Anton Sandner, an Austrian man who would now be 94 if he were still alive, was cheated out of almost 40 hectares of arable land near the Danube.

The crooks forged a public notary’s statement that “Sandner’s” signature on the sales contract was authentic, as well as a power of attorney for Sandner in the name of a Róbert Glasner of Bratislava. The cadastral office was fooled by the forgeries; Sandner’s descendants suffered over €5 million in damages on the deal.

Descendants of another dead couple, Nándor and Júlia Nagy, were cheated of almost €1 million when the same gang grabbed nine hectares in Rusovce the following year.

“A so-called front man claiming to be Lászlo Nagy provided the cadastral office with all documents required to secure these properties by fraud,” wrote investigator Juraj Porubský of the anti-organised crime squad, an elite police unit that is handling most of the “land mafia” cases.

These are only some of the cases ascribed to the “land mafia”. Three of them are being handled by the Special Prosecutor’s Office for organised crime, given the size of the damages involved, one by the General Prosecutor’s Office, and one by the Bratislava Region prosecutor. In some cases up to 10 people have been charged, suspects taken into custody, and the investigation is nearing completion; in others it has just begun.

Police believe the leader of the gang is Jozef Patocz, also known as Jozef Drag, who since 2005 “has run an organised criminal group with clearly divided responsibilities that has been active in Bratislava, Trnava and Nitra Regions”. The group was “mainly aimed at the fraudulent purchase and sale of real estate.”

Drag is currently in custody along with five accomplices. The Bratislava I District Court decided in March to extend their stay until at least September.

Police believe that the land mafia were not part of existing organised crime groups in Slovakia, but functioned on their own.

“One of the first clues was that when Drag was taken into custody, there was no mobilisation on the part of organised crime of contacts within the police, the prosecutor’s office, the judiciary,” said a source close to the investigation. “The court also had to assign them lawyers, whereas if they had been really connected, a legal defence team would have been put at their disposal.”

At the same time, some of the gang members do have ties to existing criminal structures. For example, Drag’s business partner Tibor Hamar was among those charged. Hamar is also a business partner of František Borbély, who police believe is a member of the Sýkorovci organised crime group based in Bratislava.

Drag, who has a long criminal record dating back to communism, was also allegedly friendly with Karol Patasy Sr., the father of a member of another Bratislava organised crime group, the Piťovci, who was murdered in 2005.

According to a police source, these connections to organised crime also explain why some of the final owners of the land are also known to police.

Michal Hrbáček, a former secret service agent named in connection with the 1995 kidnapping of the then-president’s son, wound up with 10 hectares of land in Rusovce that is now under investigation within the “land mafia” case.

“I was told it was land zoned for construction, and when I found out it wasn’t, I gave it back,” Hrbáček said for The Slovak Spectator. He claims that police intervened before he could complete more than half of the return transaction.

The land mafia also made extensive use of lesser-known names. Many of the current owners of stolen land cannot be traced, do not live at their listed addresses, and have disconnected phones. They were presumably used to make it more difficult to trace the original ownership of the properties.

“These groups were highly organised, from the leaders right down to the front men,” said Jana Tökölyová, spokesperson of the General Prosecutor’s Office. “They gradually passed these real estate properties through fictitious owners to end users on the basis of sales contracts where the declared price was never paid.”

Both the police and prosecution have declared an information embargo on the cases, and have refused to provide more detailed information. Many of those charged face from 12 to 20 years in jail if convicted.

“We’ll have more to say when these cases come before the courts,” said Tökölyová.