Golf on the rise in Slovakia

GOLF is one of the biggest, oldest, and most popular sports in the world. In Slovakia, where the former totalitarian regime condemned it as bourgeois, it is still considered a sport only for the better-off. But golf, suitable for all age groups, is gradually shedding this negative image as a sport for snobs. More golf courses are being built across Slovakia, something which could also make the country more interesting for golf tourists from abroad. 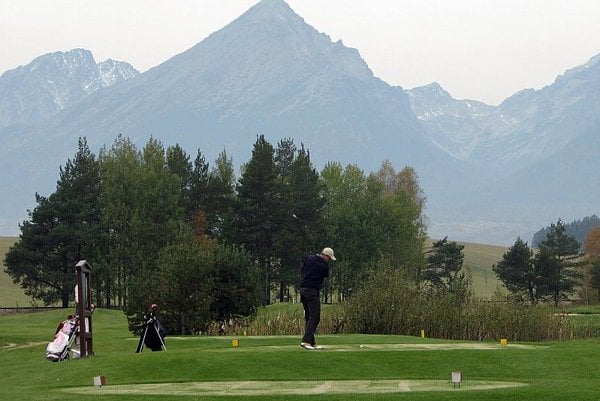 GOLF is one of the biggest, oldest, and most popular sports in the world. In Slovakia, where the former totalitarian regime condemned it as bourgeois, it is still considered a sport only for the better-off. But golf, suitable for all age groups, is gradually shedding this negative image as a sport for snobs. More golf courses are being built across Slovakia, something which could also make the country more interesting for golf tourists from abroad.

The Ladies Slovak Open, a world-level golf event being held in Slovakia in late May, will also help make the sport more popular among locals and make Slovakia more visible on the international golfing map.

The Gray Bear Golf Club in Tále, central Slovakia, will host the inaugural Ladies Slovak Open between May 27 and 30. It will mark a historic first visit by the Ladies European Tour to Slovakia. This means that for the first time a round of one of the most prestigious professional golf tours will be played in Slovakia.

This year’s Ladies European Tour will be played on 27 courses in 20 countries across the globe. This year only four new countries were added to the list: New Zealand, Morocco, China – and Slovakia – which is also the only central or eastern European country where the tour will be played.

“It is an event on the world cup or world championship level,” Golf magazine was told by Ľuboš Ďurinďák, director-general of the Tále ski, golf and hotel resort.

“This is a milestone in the history of Slovak golf,” Peter Kapitán, media manager of the Slovak Golf Association (SKGA) told The Slovak Spectator. “To date, no similar high-quality and prestigious tournament has been played in Slovakia. The Ladies European Tour is a world series of tournaments attended by the best world golfers. For Slovakia, and especially for the region, it is a chance to appear on the world golfing map.”

According to Kapitán, people attend such events in large numbers. Last year, after Čeladná in the Czech Republic hosted a tournament of the professional European tour, golf tourism rose there by 25 percent.

“The Gray Bear golf course in Tále is at the level of any European course, so if golfers or spectators go there, there is a high probability that they will return,” he said.

Slovakia is not known as a golfing destination even though, for example, the 18-hole Black River course in Bernolákovo is among the most demanding in Europe, according to a United States Golf Association (USGA) rating, and the Tále course has the parameters of a championship golf course.

“At present, Slovakia is well-hidden on the golfing map,” said Kapitán. “But Slovakia as a golf destination can offer tourists attractive and diverse natural conditions at golf courses, whether it is on the [Danubian] plain in Báč, at the manor-house golf resort in Bernolákovo, at Tále in the Low Tatras, or at Veľká Lomnica in the High Tatras. Slovakia can be interesting for foreign clients, especially because it is so-far unknown.”

Roháčová agreed that Slovakia’s position on the world golfing map is not currently very conspicuous.

“The concentration of courses is not very interesting for golf tourism,” she told The Slovak Spectator, adding that this requires at least three 18-hole courses within 10 kilometres. “Regarding this we have a lot of catching up to do. But in spite of this unfavourable situation Slovakia is getting a chance of presentation within the Ladies European Tour.”

Sylvia Hrušková, general director of Golf International, the company that runs the Black Stork golf resort in Veľká Lomnica, agrees that in general knowledge of Slovakia as a golf destination is very weak. But according to her, this is not about golf, but about the promotion of Slovakia. The situation among amateur golfers is better, she said.

“Golf is a sport of ‘travellers’,” Hrušková told The Slovak Spectator. “Each course is different, has different scenery, length, type of grass, climatic conditions, difficulty, etc. So there is great potential for the development of tourism.”

According to Hrušková, who cited the findings of a KPMG study about the maturity of golf markets in Europe, the Middle East and Africa for 2008, Slovakia is an infant country in terms of demand for golf. With a population exceeding 5 million citizens and 6,000 affiliated golfers, demand in Slovakia is only at 0.12 percent, compared to a coefficient in developed countries between 1 and 5 percent and in matured country above 5 percent. If this latter case applied to Slovakia it would have over 250,000 affiliated golfers.

“For this we need infrastructure [in the form] of courses as well as other services,” said Hrušková. “Golf in Slovakia has a tradition of over 100 years, but with a long gap, and thus it is like a new sport here. For the further development of golf it would be ideal to have a nine-hole course in each bigger town at least, or training places at schools. This would help.”

The Slovak Golf Association, an organisation which brings together the country’s golf clubs and amateur players, has over 6,000 members, and numbers are growing, according to Kapitán. He sees the present number as quite sound, but points out that golf is the second-most widespread sport in the world, and there is therefore space for growth.

“By the end of 2011 another two or three golf courses should be built, which will certainly draw new golfers,” said Kapitán.

The history of golf in Slovakia dates back to the early 1900s, but after World War II golf as a sport effectively vanished. The recent history of golf started with the opening of a nine-hole course in Bernolákovo in 1997. Two years later the Black Stork golf resort was opened, linking back to the oldest golf course on Slovak territory, dating from 1909. Since then, more golf courses have been built in Slovakia, for example the Eurovalley Golf Park near Malacky, and a number of new projects are in the pipeline.

One thing that those involved in golf in Slovakia see as a large obstacle to its further development is the persistent labelling of their sport as one for snobs.

“This means that people still think that a golfer must be at least a director of a factory, or a hotel owner,” said Kapitán. “But this is not true. The costs for a child starting to play golf are comparable with hockey or tennis. ”