Stronger than a volcano

THE EYJAFJALLAJOKULL volcano had a peculiar birthday gift for the 20th Central European Music Festival (CEMF). Had it not been for the participants’ strong will and professionalism, the ash cloud, though impressive, would probably have ruined the event. 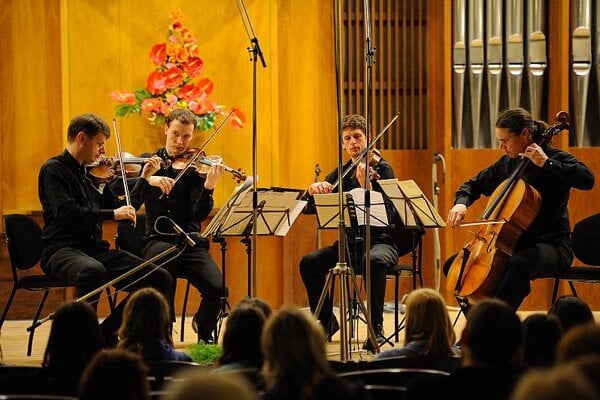 THE EYJAFJALLAJOKULL volcano had a peculiar birthday gift for the 20th Central European Music Festival (CEMF). Had it not been for the participants’ strong will and professionalism, the ash cloud, though impressive, would probably have ruined the event.

The organisers of the annual festival, held in Žilina between April 19 and 24 this year, had good reason to fear disaster, with scores of musicians supposed to arrive in Slovakia from ten different countries, including the United Kingdom, Italy and Russia.

As it was, the closure of European airspace affected mainly the opening concert, after a Polish conductor and a French bassoonist were stranded in Tenerife and Paris respectively and had to be replaced.

“From then on, we were constantly following the news, which was indeed extremely stressful,” said Ivana Korbačková from the Music Centre, the main organiser of the festival. “Fortunately, the artists were all very understanding, and they very kindly agreed to find other means of transport.”

For example, Vassilena Serafimova, a successful Paris-based Bulgarian percussionist and laureate of numerous international competitions, spent a whole night on a train.

The same went for Emmanuel Ceysson, an award-winning musician from France who became the principal harpist at the Paris Opera at the age of 22. Because of a French rail strike that coincided with the air travel chaos, Ceysson could not even get a sleeping car, and spent the last four hours of his nightlong trip standing up.

The most eagerly expected guests of the festival, the St. Petersburg Chamber Orchestra led by Yuri Gilbo and featuring renowned virtuoso trumpeter Sergei Nakariakov, managed to take a plane as scheduled, and gave what Korbačková called a “phenomenal closing concert that was a great satisfaction and the cherry on top after the whole week”.

In total, seven concerts were held during the festival. The 20th jubilee differed from the preceding festivals not only because of the ash cloud-related anxiety, but also by virtue of the higher-than-usual number of orchestral performances, as well as the “all-star” line-up of musicians.

For instance, the 2010 CEMF gathered, apart from the aforementioned musicians, the ATOS piano trio from Germany, the Bennewitz Quartet from the Czech Republic, Slovak violinist Dalibor Karvay and Hungarian cellist István Várdai.

Korbačková particularly praised the commitment of the local audience. In fact, some of the performances were sold out long before the event, and the festival enjoyed one of the highest attendances in its history, more than 2,800 people.

“The Žilina audience has always been very cultured, receiving musicians with an admirable responsiveness and invariably rewarding them with rousing ovations,” she told The Slovak Spectator, adding that this is something that makes performing artists always keen to return.

Another reason why even top musicians so readily accept invitations to take part in the CEMF, according to Korbačková, may be the fact that it has, over its two decades of existence, attained a remarkable international renown.

“It seems that appearing in Žilina has now become, to a certain extent, a matter of prestige,” she observed. “This is at least what we are hearing from the artists themselves.”

This belief was confirmed by the words of Italian conductor Francesco Angelico, this year’s winner of the Critics’ Award, which is the grand prix of the CEMF and includes an invitation to reappear at the following year’s festival.

“I was very much surprised that such a comparatively small town hosts a festival of this quality and I am of course grateful for the opportunity to come back next year,” he told The Slovak Spectator. “For me, music is a way of communicating with people, and I think I managed to have a beautiful exchange with the Slovak audience. Or at least I hope so.”