The bigger a company, the greater its responsibility not only for the development of its business but also for nurturing the environment in which it operates. For that reason Slovenské Elektrárne, the biggest power generating company in Slovakia and a part of the worldwide energy utility Enel Group, is pursuing several priority activities closely related to power generation: corporate social responsibility (CSR) and sustainable development. 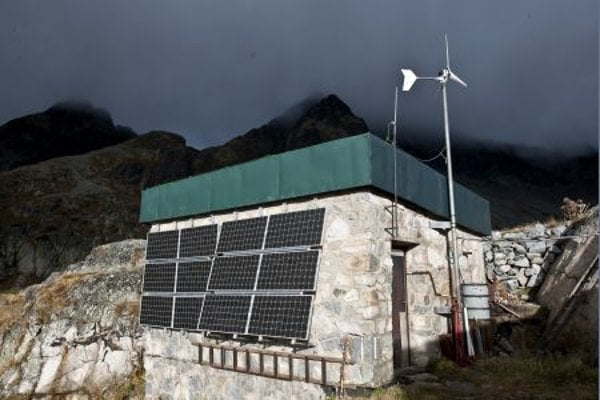 The bigger a company, the greater its responsibility not only for the development of its business but also for nurturing the environment in which it operates. For that reason Slovenské Elektrárne, the biggest power generating company in Slovakia and a part of the worldwide energy utility Enel Group, is pursuing several priority activities closely related to power generation: corporate social responsibility (CSR) and sustainable development.

Slovenské Elektrárne's environmental partnership with Slovak national parks started in 2007 as a part of the programme Energy for Nature, one of the pillars of the corporate social responsibility concept Energy for the Country. Working together with the Tatranský národný park (TANAP - High Tatras National Park), the company has been able to preserve the population of Tatra marmots and chamois and also to spread its protective wings over the peregrine falcon. In 2009, the power company added the cleaning of several types of waste from selected streams and saving salmon trout to its environmental agenda. The programme for maintaining biodiversity in the High Tatras in 2010 is focused on protection of the lesser spotted eagle and golden eagle.

The all-season Téryho chata (Téry Hut) is the highest-altitude hut in the High Tatra. Its operation, at 2,015 metres, has never been easy. In November 2009 Slovenské Elektrárne finished installation of a photovoltaic system together with electrical wiring system at the hut. As a result, this tourist destination and shelter from inclement weather will be supplied with electricity throughout the year. It also now has a functioning refrigerator and freezer.

Téry Hut is not connected to the electricity supply system but its location and exposure to sunlight allows for this kind of electricity to be produced. During summer the sun shines there from 7:00am till late in the evening, but in winter most days have only 4-5 sunlight hours. Electricity is produced by batteries, or diesel aggregate if there is problem with under capacity. The first solar panels were installed five year ago, with a maximum capacity of just 1.2 kWp. Thanks to the new photovoltaic panels the maximum level of electricity production will now be 9kWp. The older 1.2 kWp system from Téry Hut will be moved during spring 2010 to Zbojnícka Hut. This is a pilot project in the Slovak mountains and will improve the level of comfort and services for staff as well as hut visitors. Slovenské Elektrárne and Enel are considering extending the project to other popular mountain huts if the present project is successful.

For the project at Téry Hut 30 photovoltaic systems were used, which together cover 49 square metres and were transported to the site by means of a Mi8 helicopter. Because of bad weather at the time, flights from Hrebienok were cancelled for 28 hours but nonetheless 2,000 kilograms of cargo were carried to the hut, which is located in the Malá studená dolina, along with a refrigerator and freezer. In October 2009, just a few days after the airlift, winter arrived in the mountains and brought 2 metres of snow. All the preparations had been made inside the hut. In November the multicrystalline panels were installed. Each of them has a capacity of 300 Wp. The solar power plant therefore has an energy output of 9 kWp, almost nine times more than the previous one. Total investment related to this project was close to €100 000 (Sk3 million).

"Téry hut is an ideal place for nature lovers to familiarise themselves with this ecological and sustainable process of electricity generation," said Michele Bologna, Slovenské Elektrárne's head of communications. "It will not now be necessary to turn on the diesel generator so often. It could be used just when there is a high load amount or if the charge in an accumulator reaches a critical level."

At the hut, there will be wall sockets supplying 230-volt power; this will enable people to charge their mobile phones, and to plug in more appliances. The hut caretaker Miroslav Jílek explains the advantages of the new solar system for the hut: “The power distribution system of the hut will be completely replaced: all the lights will be of the energy-saving kind. We should have lighting everywhere: in all rooms and corridors. Many people come to the hut without a lamp and in the evening they have problems orienting themselves, so now this problem will be solved.”

After its modernisation, Téry Chalet will serve not just symbolically, but also actually, as a lighthouse in the Malá studená dolina. After its reconstruction, lighting will be installed that should allow it to serve as a beacon for lost hikers in case of poor visibility. The hut, which is 110 years old, has finally experienced a true revolution. "We will also be able to put into operation a fridge and a freezer. This will be a leap forward for us, as otherwise we have to bring fresh meat and other food all the way up once every three days. Now, it will be easier to store these. In the summer months we would also like to solve the problem of drawing of water for the hut, and thus lighten the power used. So the first objective will be environmental protection, not saving money," Jílek added. In the future the hut should also house a meteorological station.

Slovenské Elektrárne's CSR programme has become closely associated with two symbols of the High Tatras – the chamois and marmots that are considered to be the most famous and rare species in the High Tatras National Park (TANAP). Chamois have lived in this region since the last ice age and are an endemic species. The number of chamois has fluctuated in recent years, with only around 300 in the High Tatras in 1997, growing only very slowly to about 470 in 2005. Thanks to Slovenské Elektrárne and TANAP, the chamois population grew to 773 in 2008. In that same year, peregrine falcons were also included in our species preservation and biotope protection projects. In 2007, approximately 530 peregrine falcons lived in the mountains of Slovakia.
Marmots, like chamois or peregrine falcons, are another symbol of our country’s beautiful mountains. Marmots live in colonies and form close social relationships. Because of a decline in the marmot population people started to protect this species in the second half of the 19th century. Today, more than 600 marmots live in the High Tatras but in the Belianske Tatry (Belianske Tatras) only a single marmot was found. This was the main reason why Slovenské Elektrárne decided to help preserve the marmot's natural environment in this area and prevent its extinction. Part of our plan was to establish new marmot colonies in the Belianske Tatras and the population grew to six marmots in 2008.
In nature protection and preservation, Slovenské Elektrárne (SE) has participated in protecting peregrine falcons in the Vysoké Tatry (High Tatras) since 2008. This species lives primarily in Spain and the United Kingdom but since 1993 its presence has continually decreased because of human presence in its natural habitat. The biotope of the peregrine falcon is influenced by several types of sport and leisure activities as well as by the increase of housing in the peregrine's natural surroundings. Slovenské Elektrárne is supporting a project helping to protect the peregrine's habitat by monitoring its population, patrolling and checking the birds' nests and providing opportunities for establishment of other breeding places. With its financial contributions, the company has also supported the monitoring of peregrine migration, provided technical support and educated people in these procedures.

In 2009, SE also financed several activities, permitting the company to seed thousands of salmon trout in streams of the High Tatras National Park. Salmon are said to be a bio-indicator of a clean environment. Slovenské Elektrárne first released 2,000 young salmon in Studený potok from Tatliakova chata to Zuberec. The second bio-cultivation area in Studený potok stretches from Hrebienok to Stará Lesná, with the same number of fish released. The last area spreads from Monkova dolina to Tatranská kotlina along Bielsky potok (Biela brook), where nearly 3,000 fish were released.

Slovenské Elektrárne employees cleaned the Biela brook in the municipality of Ždiar. The Štátne Lesy (State Forests) TANAP company has been organising systematic cleaning of the Tatras for years. Thirty employees and top managers of Slovenské Elektrárne joined this process.
Apart from financial support for the Tatras, they also took part in preserving the biotopes through their own work. Financial manager Branislav Strýček, a passionate hiker and ski-alpinist who during his university studies also worked as a sherpa for Téry Hut, recruited people from the departments of finance, accountancy and audit to clean the brook. They were joined by employees from the department of communication and public relations, as well as the heads of individual facilities at hydroelectric power-plants and their families. They were divided into groups of four which each covered a distance of 400 metres. "Altogether, we cleaned about three kilometres of the brook, but even from this short section we managed to remove about seven hundred kilograms of waste that a truck had to take away in three journeys. Most often, the waste included plastic packaging, tins and cans," Veronika Čičová of the communication department for hydro power plants said. "To our surprise, the heaviest waste consisted of parts of metal plates from roofs – very probably from construction work near the brook. Curiosities consisted of corroded exercise weights, bicycle parts, baby-pram parts, canvas from a truck, but also highly toxic waste like used parts from storage batteries and car batteries, and unemptied plastic packaging containing chemical detergents."