WITH just a bit more than one month before the parliamentary elections the numbers reflected in opinion polls gain increasing importance. With support for Smer showing a sagging tendency and a rising level of support for the centre-right parties being seen in the polls, the top ruling party has a few more reasons for concern. Political observers say the outcome of the 2010 parliamentary election is not very predictable – but they are ringing alarm bells about an expected low voter turnout. 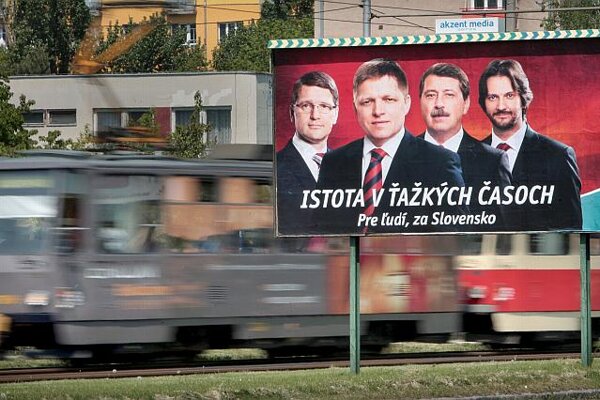 WITH just a bit more than one month before the parliamentary elections the numbers reflected in opinion polls gain increasing importance. With support for Smer showing a sagging tendency and a rising level of support for the centre-right parties being seen in the polls, the top ruling party has a few more reasons for concern. Political observers say the outcome of the 2010 parliamentary election is not very predictable – but they are ringing alarm bells about an expected low voter turnout.

The results of two major opinion polls were published at the end of April, some five weeks before the elections. The MVK polling agency reported on April 28 that three centre-right parties, the Slovak Democratic and Christian Union (SDKÚ), Freedom and Solidarity (SaS) and the Christian Democratic Movement (KDH) would have won 57 seats in parliament, the same number of seats that would be captured by Prime Minister Robert Fico’s Smer party.

Eight parties would have made it to parliament according to the MVK poll. Smer was at the top in the poll with 35.1 percent support, followed by SDKÚ (11.7 percent), SaS (11.6 percent) and KDH (11.4 percent). The Slovak National Party (SNS) had the support of 6.2 percent of those polled, while the Hungarian Coalition Party (SMK) captured 6 percent. The Movement for a Democratic Slovakia (HZDS) at 5.2 percent and Most-Híd party on 5.1 percent just barely had enough support to cross the 5-percent threshold necessary to send MPs to parliament.

Two other polling agencies reported slightly better results for Smer, but just like MVK, their numbers showed support for Smer has been falling. The most recent Polis agency poll showed Smer would capture 36.2 percent of the vote, but its current coalition partner HZDS would finish below 5 percent. According to Polis, SDKÚ and KDH would both claim around 13 percent, while SaS would get just over 9 percent. SMK would not make it to parliament and Most-Híd would get the support of just over 5 percent.

The Focus polling agency said its April 22 poll suggested that eight parties would enter the parliament after the elections. The highest number of votes, 36.8 percent, would have gone to Smer with SDKÚ the runner-up with 13.4 percent. SaS would have gained significant support, at 11.5 percent, while KDH would have stood at 8.6 percent, the same outcome as for SNS. Another ruling coalition member, HZDS, would have gained 5.4 percent of votes while the two ethnic Hungarian parties – the Hungarian Coalition Party (SMK) and Most-Híd – would have just barely made it to parliament, both with 5.1 percent and exceeding the 5-percent threshold by just a hair's breadth.

Smer may bear the brunt from crisis

Sociologist Pavel Haulík from MVK agency believes Smer’s falling results in the polls are related to the impact of the economic crisis in Slovakia.

“People are losing patience with the crisis and since Smer is in the government, they have to bear the consequences,” he told The Slovak Spectator, adding that this might, however, be only a warning from the voters and an impulse for Smer’s politicians to be more active in the fight against the crisis.

In the past Smer actually received fewer votes in the actual elections than the pre-election polls suggested, but that was when the party was in opposition.

Now, according to Haulík, the ‘SDKÚ effect’ might apply to Smer, referring to the fact that SDKÚ as a ruling party had better actual results than the polls were suggesting.

Jan Baránek from the Polis agency noted that the numbers are getting clearer now as the elections draw near and those less-decided respondents who some months ago said they would vote for Smer may now have changed their minds.

“The election result for Smer [suggested by the polls] is becoming more realistic,” Baránek told The Slovak Spectator.

The June 12 elections have the potential to come to a surprising end because of the many small parties swimming in the dangerous waters around 5-percent support – the threshold that must be crossed to get parliamentary seats. These are not only several new, emerging parties, but also some older, well-establish parties such as the HZDS, SNS and SMK which have suddenly found themselves relegated to the minor league.

“These are the ones with better chances [to get to parliament] than the completely new parties,” Haulík said, excluding SaS from the pool of small parties, since it has shown consistent support of around 10 percent. Such poll results are close to a guarantee for the party to make it to parliament, despite the fact that its voters might not be as loyal as those supporting older, established players on the political scene, both Baránek and Haulík agreed.

“The existence of so many small parties is a result of unresolved problems within those bigger established parties – such as SMK, which practically split in two [Most-Híd emerging as the other half], but also SaS, which is a result of internal problems in the SDKÚ,” Haulík said.

“But what is even more surprising is that [SaS] takes votes even from Smer, so the claim that small parties have emerged due to problems in bigger parties can be applied even to Smer.”

Baránek said the chances for the small parties to leap the 5-percent threshold and shuffle the post-election playing cards depend on the election turnout – which according to the latest Focus poll is expected to hit a historical low. Only 44.1 percent of the respondents in that poll said they were 80-100- percent likely to vote. This could mean that the turnout could fall below 50 percent, even less than in 2006, when only 54.6 percent of Slovaks cast their ballots. Such figures are just a fraction of the turnout in the decisive years of 1998 – when some 84 percent voted – and 2002, when 70 percent turned out.

A low election turnout can, according to the analysts, help those parties which have a stable, loyal electorate. These are, primarily, the KDH, as well as the SMK and the HZDS. For some other parties the election turnout might be a crucial factor in their performance.

“It’s less favourable for parties with more ambitious aspirations,” Haulík said. “Smer is the one that would be least pleased by low turnout.”

Baránek mentioned SaS as the prototypical party that would prefer the highest possible turnout.

Baránek said Most-Híd is in a special situation and would benefit from higher turnout, as it still has potential to attract supporters because it is seeking to attract both Slovak and Hungarian voters, unlike its rival SMK, which has limited itself to only appealing to ethnic Hungarians.

According to Haulík, support for Most-Híd appears to be solid, but the fact remains that the party is still polling only around 5 percent.

“If the same numbers come out of the last polls before the elections, it could discourage the voters and they could make a last-minute decision to vote for someone else despite their past preference for Most-Híd,” Haulík said, adding that a new party with support oscillating around 5 percent is always at more risk than an established party with loyal voters that has the same polling results.