AT THE VERY start of the current government’s term in 2006, when news emerged that Robert Fico’s Smer party would ally itself with the nationalist Slovak National Party (SNS), known for its leaders’ hard-line statements about the Hungarian and Roma minorities, concerns were expressed about the treatment of minorities in Slovakia during the coming four years. At the end of the government’s term, political analysts, sociologists and representatives from minority and human rights NGOs are saying that their fears were realised. 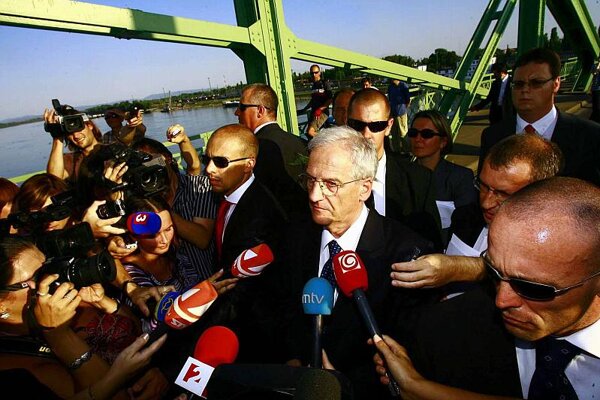 AT THE VERY start of the current government’s term in 2006, when news emerged that Robert Fico’s Smer party would ally itself with the nationalist Slovak National Party (SNS), known for its leaders’ hard-line statements about the Hungarian and Roma minorities, concerns were expressed about the treatment of minorities in Slovakia during the coming four years. At the end of the government’s term, political analysts, sociologists and representatives from minority and human rights NGOs are saying that their fears were realised.

Representatives of the five largest minority groups living in Slovakia – Czechs, Hungarians, Roma, Germans and Ruthenians met in late March 2010 in Vinica. At the meeting, they agreed that several problem areas in Slovakia need to be addressed through new or amended laws, specifically a new, comprehensive law on the legal status of minorites and their protection, a law on the use of minority languages, and a law on financing minority cultural development.

“The political and societal development after November 1989, as well as after the emergence of the Slovak Republic in 1993 has provided new possibilities for individual development of national minority members and their societal organisations,” their joint statement reads, adding that Slovakia’s legal framework (the constitution, anti-discrimination legislation and international agreements) guarantees the equality of minorities and their rights, at least on paper.

“But we are of the opinion that there is still an absence of clear legislative, institutional and political guarantees that would ensure universal development of our national communities in the long run, that would ensure their effective equality in every area of social life and that would stop the accelerating assimilation, which is an undoubted reality,” the statement continues.

There are at least a dozen national minorities living in Slovakia, but only two groups regularly make the news, Roma and Hungarians. Tensions between these minority groups and the majority Slovak population are commonplace in some parts of the country, although for different reasons. The negative atmosphere is often fuelled by politicians, especially during election campaigns as playing the so-called Hungarian card in past elections has often scored political points for certain parties.

The Slovak Spectator previously published a summary of the government’s activities regarding Roma issues and this article focuses on issues regarding Slovakia’s ethnic Hungarian minority.

President Sólyom added to the tension during a visit to Serbia in March when he stated that Hungarians living in Slovakia, Serbia and Romania should learn the state language in each country only as a foreign language, which was then quickly denounced by Prime Minister Robert Fico who called the statement an attack on the integrity of Slovakia.

The first half of 2010 was also marked by controversy over the Patriotism Act, drafted by the Slovak National Party, which would have required the playing of the Slovak national anthem at all schools and many other governmental and public events as well as state officials swearing an oath of fidelity and a display of national symbols in all classrooms.

After a wave of protests President Ivan Gašparovič vetoed the law which then was supplanted with a government-proposed amendment to the Law on State Symbols. Both pieces of legislation were criticised as being unnecessary by representatives of the two political parties primarily representing ethnic Hungarians in Slovakia.

The Forum Minority Research Institute, a non-governmental think tank, held a press conference on May 4 to present their evaluation of the minority policies of the current government. According to Kálmán Petőcz, a programme director of the institute, there are two sets of problems concerning minorities in Slovakia: those that emerged in the past four years due to the sharpening relations between Slovaks and Hungarians – a consequence of political acts on both sides – and those that are chronically present in Slovak society regardless of the government in power.

“And as they remain unresolved, they contribute to political acts on both sides, which in turn increase the tension,” Petőcz said.

Petőcz said there are three main problems with Slovakia’s minority policies in relationship to the Council of Europe’s Framework Convention on the Protection of National Minorities.

The Framework Convention obliges the state “to promote the conditions necessary for persons belonging to national minorities to maintain and develop their culture and to preserve the essential elements of their identity, namely their religion, language, traditions and cultural heritage”. But Petőcz claims the government’s programme statement in 2006 only offered to preserve the status quo for the ethnic Hungarian minority.

“Such policies neglect the development of national identity,” Petőcz said. “Without development there is no real possibility to preserve the identity in the long run.”

In addition, he claimed that even this promise was not fulfilled, as in several cases the status quo was changed – as in the area of language rights, which he said were modified by the amendment to the State Language Act.

Secondly, Petőcz said Article 15 of the Framework Convention ensures the right of minority representatives to take part in decision-making on issues of concern to them.

“Unfortunately, minority policy in practice in Slovakia tended to the pattern in which the political elite of the majority [population] decides about the identity of the minorities,” Petőcz said, adding that there are no effective means and mechanisms that allow minorities to participate in decision making.

Thirdly, Article 6 of the Framework Convention stresses the importance of intercultural dialogue, which Petőcz charged does not exist in an institutionalised form in Slovakia, saying that elements of intercultural dialogue are also absent in the education system because school children learn next to nothing about the culture, identity or even the mere existence of national minorities living in Slovakia.

“That requires a process of Slovak-Hungarian reconciliation to be started,” said political analyst László Öllös from the Forum Institute. “No political step can replace intercultural dialogue.”

Petőcz said the government tends to evaluate the success of their minority policies in quantitative terms: the number of schools with a minority language as the language of instruction, the number of minority theatres and so forth.

Reacting to the Forum Institute’s press conference, Čaplovič rejected the claim that the government works with quantitative rather than qualitative evaluation and called the NGO’s press conference “a superficial and demagogic evaluation of the state of minority-related policies in Slovakia.”

The deputy prime minister’s statement also said “the role of the government in the area of minority politics is not to row, but to steer”, adding that civil society, associations and local governments are expected to fill in the space the state government creates for them.

“Dušan Čaplovič doesn’t consider it key to support the most numerous minority, but to support also the smallest, particularly those that don’t have their own state and therefore need this care in the light of the European Charter on Minority and Regional Languages,” the statement continued.

“A sustainable solution may only be produced by long-term systematic endeavour, both in terms of strengthening mutual trust between political elites and bringing about a fundamental turning point in the field of implementing the educational system’s content reform, including penetration of tolerance and mutual respect into political culture and public life,” Petőcz wrote in his book entitled National Populism and Slovak-Hungarian Relations in Slovakia, 2006-2009.