Lessons from the Greek tragedy

THERE are some serious fiscal responsibility lessons that Slovakia might learn from the unfolding Greek tragedy, say Slovak economists, though their opinions might be overshadowed by the contentious domestic political discourse about the country’s participation in the €110 billion loan programme for Greece – currently paralysed by strikes and social unrest. 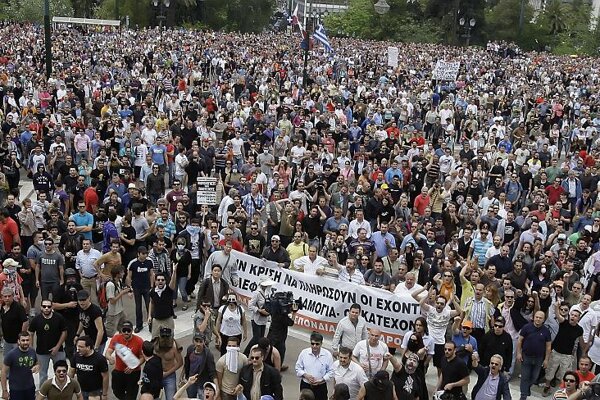 THERE are some serious fiscal responsibility lessons that Slovakia might learn from the unfolding Greek tragedy, say Slovak economists, though their opinions might be overshadowed by the contentious domestic political discourse about the country’s participation in the €110 billion loan programme for Greece – currently paralysed by strikes and social unrest.

Slovakia’s share in the loan provided by the European Union and the International Monetary Fund will come to €800 million.

Economists and other market watchers suggest that Greece is not the only country being forced to cut its state budget during a period of stagnation or feeble economic growth – even though macro-economic theories suggest that it is during these slow-growth periods that economies can benefit from more expansive fiscal policies.

“However, these theories of budget deficits serving as a stabilising contributor in times of economic hardship assume that countries pursue a much more responsible fiscal policy during times of expansion in order to decrease their public debt levels and to have the ‘credit card limit of deficit finance’ available when a less favourable phase of the economic cycle kicks in,” Vladimír Vaňo, chief analyst with Volksbank, told The Slovak Spectator.

As to what threat the current situation in Greece poses to the eurozone, Vaňo suggests that a single member state’s fiscal trouble on this scale – the interest rates being demanded for loans to Greece far exceed those for any other developed European country – and speculation about a possible default or exit from the European monetary union have cast doubt on the credibility of the entire system.

“It is clearly not in the interest of the eurozone countries to undermine the credibility of the second most important world reserve currency,” Vaňo said.

For Vaňo, one of the major lessons not only for Slovakia, but also for other European countries, is that running fiscal deficits during years of economic expansion is playing with fire, something which can run out of control and lead to a painful debt trap during a downturn later in the economic cycle.

“The major lesson from Greece is that the 3 percent of GDP permissible deficit rule was meant for times of hardship, not to pass deficit-generating budgets regardless of economic expansion,” Vaňo said. “Not only Greece, but many other European nations find themselves in the paradoxical situation of being forced into tightening their budgets in this period of economic slowdown or only very mild and moderate growth, when textbook theories of ‘automatic fiscal stabilisers’ would on the contrary call for looser fiscal policy to support economic growth.”

Juraj Karpiš, an analyst with the economic think-tank INESS, said that apart from the obvious lesson illustrating the results of fiscal irresponsibility, it highlights some previous warnings about the risks that Slovakia undertook by entering the monetary union.

“This step, along with the widely emphasised advantages for Slovakia, also carried risks and expenses,” Karpiš said. “The contradiction between one [eurozone] monetary policy and independent national fiscal policies in the political project of the single European currency brings, via Greece, an unpleasant wake-up from euro-optimism and the need to somehow address this unresolved tension.”

A second message, according to Vaňo, is that without conditions for solid, private sector-driven economic growth, neither living standards nor the public services associated with a welfare state can be maintained.

“Shutting one’s eyes over a lack of economic expansion driven by competitiveness, innovation and productivity and covering the gap with the public debt ‘credit card’ is a shortsighted way to run state budgets,” Vaňo said.

He added that postponing painful, yet unavoidable, decisions such as public spending cuts does not solve the problem but augments it, occasionally into proportions which exacerbate the pain to a hardly bearable degree, as can be seen currently in the social turmoil in Greece. Vaňo said there are lessons for Slovakia to learn in the Greek tragedy.

Market watchers agree that being negligent in maintaining vigour in public finances might lead to a situation in which external circumstances force painful solutions at the worst possible time, for example, requiring slashes in public spending and increased taxes in times of recession.

“In other words, the message not only for Slovakia, but also for other European countries is clear: running up debts in good times might spell major trouble during bad times,” Vaňo told The Slovak Spectator.

Loan is only a palliative

Analysts agree that one of the major outcomes of the financial assistance for Greece is that the country now has the resources to refinance its maturing debt outside the private bond markets and thus time to undertake urgent fiscal reforms and trim its hefty deficit.

“On top of buying time to implement painful reforms, by applying for international assistance Greece also taps into IMF expertise and experience in fiscal consolidation; moreover the process is more firmly mediated by the outside technical experts of the IMF, which leaves less leeway to the “political will” of Greek politicians who might not always possess the necessary courage to carry out painful fiscal adjustment measures,” said Vaňo.

Karpiš believes a better solution would have been for the EU to leave the Greek debt crisis entirely to the International Monetary Fund which he said has the necessary experience and structure.

“Moreover, it would not have been accompanied by the national emotions that accompany loans from one European Union country to another,” Karpiš told The Slovak Spectator.

Karpiš warned that this loan is only buying time for Greece and shifts the problems to the future, adding that the EU is trying to solve the problem with liquidity, despite the fact that Greece is insolvent.

“I think that Greece will not be able to avoid restructuring its debt,” Karpiš said.

Are there similar dark clouds, like those in Greece, hanging over other countries as well? Market watchers say the growing public debt of many member countries is a shared worry for the whole EU.

“The whole of Europe is facing problems with increasing public debt and for some countries, such as Portugal, Spain and Ireland, these problems are really serious,” said Karpiš. “It is debatable how the EU will act if any of these countries find themselves in a situation similar to Greece, and whether it can find enough financial resources and political will for a similar support package.”

Vaňo explained that the perception of the severity of refinancing the Greek public debt escalated to an extreme level in April even though Greece had been able to refinance maturing debt during March by issuing new bonds in the financial markets.

“Mounting speculation surrounding the viability of refinancing the rest of the debt maturing this year, with as much as €8.5 billion coming due on May 19 alone, were initially soothed by the commitment of the Greek government to cut its budget deficit by four percentage points from last year’s unsustainable levels of almost 14 percent of GDP,” Vaňo told The Slovak Spectator. “However, with ongoing instances of social unrest, markets became wary of Greek politicians' ability to push through such sweeping deficit-cutting reforms.”

At the end of March, Greece was supported by a mutual commitment from eurozone states who pledged to cover the country’s refinancing needs in an emergency through bilateral loans from other eurozone members.

“This commitment was necessary to show the capability of the eurozone to avoid a worst-case scenario that would hurt the credibility of the entire euro project and which might inflict additional costs on all other members,” Vaňo noted.

But even after eurozone states had made this commitment to bankroll Greece in the event of urgent need, market anxiety continued, leading to pressure to provide a more specific mechanism of mutual assistance, Vaňo said.

“The March agreement on mutual assistance through bilateral loans was an ad hoc attempt by eurozone member countries to mimic the functioning of a federal fiscal authority – without really creating one but only by agreeing on a scheme of mutual support,” he added.

Vaňo also remarked that in Hungary it was the “stringent fiscal consolidation agreed upon in the October 2008 rescue package with IMF which on one side made Hungary a front runner in fiscal consolidation last year, but at the same time eroded political support for the governing socialists, who were at the helm when the IMF requirements were carried out.”

According to Vaňo, Hungary did not avoid anti-government rallies either but that the strong guidance by the IMF made the implementation of Hungary’s fiscal consolidation plan more viable. He said he expects that Greece is about to go through a process similar to Hungary's, only on a relatively larger scale.