“CORRUPTION is anything that affects a judge and sways them in a direction that they would not otherwise have gone,” said renowned American lawyer Judge Stuart T. Waldrip, during a recent lecture to law students at the Bratislava School of Law (BVSP). He visited Slovakia in mid-May and spoke to students about identifying and fighting corruption in the justice system and the role of judicial ethics in building an independent judiciary. Waldrip formerly worked as a judge of the Orange County Superior Court in California. He is familiar with the corruption problems faced by countries in central and eastern Europe thanks to his activities as the Bulgarian Justice Ministry’s special adviser on corruption, a post he has held since 2009. 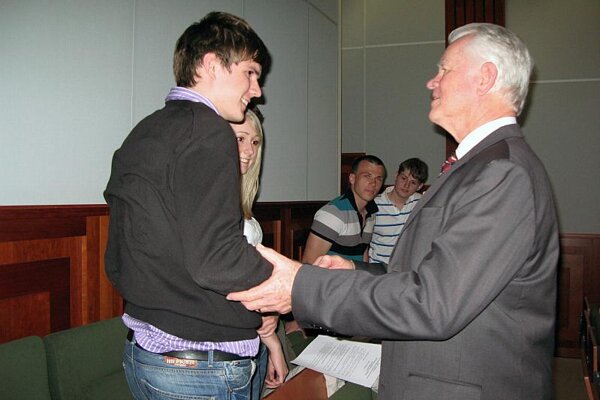 “CORRUPTION is anything that affects a judge and sways them in a direction that they would not otherwise have gone,” said renowned American lawyer Judge Stuart T. Waldrip, during a recent lecture to law students at the Bratislava School of Law (BVSP). He visited Slovakia in mid-May and spoke to students about identifying and fighting corruption in the justice system and the role of judicial ethics in building an independent judiciary. Waldrip formerly worked as a judge of the Orange County Superior Court in California. He is familiar with the corruption problems faced by countries in central and eastern Europe thanks to his activities as the Bulgarian Justice Ministry’s special adviser on corruption, a post he has held since 2009.

“I think Slovakia is a country with the rule of law, but like all other countries that I know anything about Slovakia needs to pay attention to the possibility of corruption,” Waldrip noted during his lecture. “And I would suggest to you that everybody needs to be honest, but judges are supposed to be the poster-child of honesty. So that’s why it’s so important to recognise and deal with corruption in the judicial system.”

Corruption in the judiciary takes on various forms – the most obvious being the acceptance of bribes for judicial favours or the giving of bribes to obtain higher position and other benefits. Delaying decisions is another frequently occurring form of corruption.

Waldrip repeated several times during his lecture that corruption is a problem not just for countries in central and eastern Europe. He said that it occurs everywhere in the world, and if untreated can cause a country severe problems.

Where corruption is widespread, he said, then people lose confidence in the judicial system and criticise judges because the system does not work well; the business community is reluctant to invest and do business in the country; the reputation of the country among its neighbours and friends is harmed; and judges themselves become discouraged and unhappy in their work.

“Included in that explanation is a standard for application of this rule stating that it applies when a reasonable person, after inquiry and knowledge of all the relevant circumstances, would conclude that the honesty, integrity, impartiality, temperament or fitness [of a person] to serve as a judge is impaired by his or her conduct,” Waldrip said, adding that such a provision is very difficult, but also very important.

The Slovak Spectator took the opportunity during Judge Waldrip’s visit to Slovakia to ask him some questions about the problems which have affected the Slovak judicial system in the recent past.

The Slovak Spectator (TSS): Several Slovak judges have complained about disciplinary proceedings launched against some among their ranks, especially those who have criticised Supreme Court President Štefan Harabin and the general state of Slovak justice. Observers have suggested that disciplinary proceedings were applied to penalise judges selectively, something which evoked the suspicion of a lack of transparency. What could be an effective mechanism for overseeing the operation of judges?

One observation that I have is that any disciplinary system can be abused and you rely very much on the character of the people who are responsible for carrying out disciplinary proceedings. I suppose if I were king of Slovakia I would make some changes – and obviously study the situation carefully before I did so. But from what I’ve heard about the disciplinary decisions I am concerned that maybe there’s not a good balance of how to handle the proceedings. I don’t have any concrete suggestions because I haven’t had enough experience; I don’t know enough to be able to make specific suggestions. But like other people I am alarmed that judges seem to be under attack by their own.

TSS: Foreign diplomats in Slovakia have started attending some of the court sittings, especially disciplinary proceedings against certain judges. Supreme Court President Štefan Harabin called the attention by these diplomats an act of intimidation. How do you assess the interest of foreign diplomats in court proceedings?

I think foreign diplomats always have an interest in being well-informed on issues that are taking place in the country, so I don’t see anything sinister about that. I’m sure there’s no interest on their part to influence the results of these proceedings. But they are interested in what’s happening in both the disciplinary proceedings and the legislature, and in other important governmental issues. So I don’t see any particular negative connotation to that.

TSS: A number of senior political officials and judges in Slovakia have recently sued – or are currently suing – media outlets using libel lawsuits, with demands for hefty personal compensation. Editors and publishers have described the situation as a threat to the free press. How do you view this situation?

The free press is one of the most important institutions in a democratic society. Anything that attempts to control or suppress the press is a very dangerous development. I don’t know about the particulars of the cases you’re talking about but I would be personally very concerned to carefully investigate and understand what those lawsuits were about and what the merits of the lawsuits are. Because protecting the press is essential to a free society. So I don’t have an opinion about the individual cases, but I have an opinion about the importance of the free press and the ability of reporters and journalists to express opinions and to report news without feeling like they’re going to be inappropriately sued or inappropriately attacked in anyway. So I think I’m a champion of the concept of the free press.