The Battle of Košice restaged in Ťahanovce

ON MAY Day, the Club of Military History (KVH) Cassoviacorps carried out a historical re-enactment of the 1945 Battle of Košice. The show took place on the premises of a former factory near the Košice suburb of Ťahanovce. 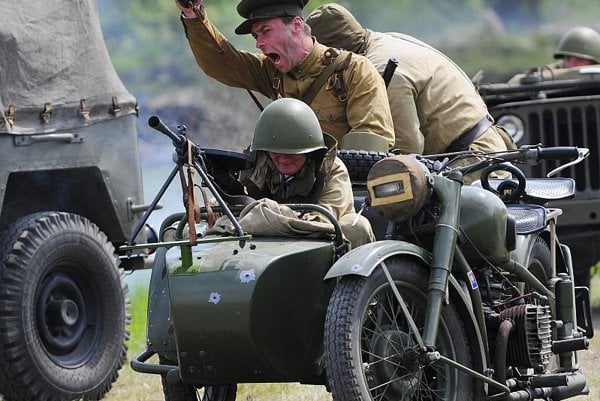 ON MAY Day, the Club of Military History (KVH) Cassoviacorps carried out a historical re-enactment of the 1945 Battle of Košice. The show took place on the premises of a former factory near the Košice suburb of Ťahanovce.

In cooperation with other military history clubs from around Slovakia as well as in the Czech Republic, the Cassovia-corps recreated the events of 60 years ago with simulations of air and ground forces involving a wide range of military equipment from the period. A German Panzer tank proved the biggest draw. “The tank was put on display for the first time in Slovakia,” Cassoviacorps member Miroslav Virág told the TASR newswire.

It was the third reconstruction of WWII battles in the Košice region for Cassoviacorps. “We simulated the advance of the Russian Red Army from the east as it drove the Germans back towards Košice and Prešov. Last year, we re-enacted the liberation of Dargov and in 2008, the liberation of Bačkov,” Virág said. He added that in future the club intends to orient its demonstrations more towards battle sites in western Slovakia.

The Battle of Košice was part of events of Dni mesta Košice/Days of Košice City that ran from May 1 until May 9. A wide range of events was offered, including a re-enactment of a 1644 siege, a one-mile Mothers’ Day walk and the Cassovia retro show of historical vehicles. The celebration culminated with Košice Mayor František Knapík handing out awards for memorable accomplishments. Awards went to sculptor Gyula Kosice, Salesian monk Peter Bešenyei for his work with the Roma community, writer Jozef Červínek, the Theatre Thália, veterinary scientist Ján Danko, as well as other awards for people who stood out in the spheres of culture, sport, science and research.