Rainbow colours to shine in Bratislava

THE UNEXPECTEDLY cold and cloudy mid-May weather should be relieved somewhat by the colours of the rainbow on display on Saturday May 22, the date of the first gay pride parade ever organised in Slovakia. 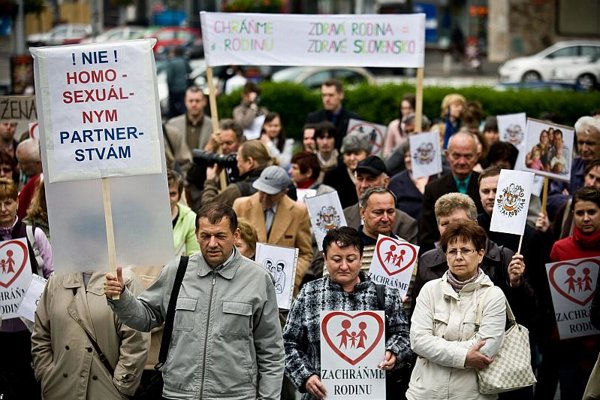 THE UNEXPECTEDLY cold and cloudy mid-May weather should be relieved somewhat by the colours of the rainbow on display on Saturday May 22, the date of the first gay pride parade ever organised in Slovakia.

Slovakia is the last country in the EU to witness a Pride event – intended to celebrate people’s authentic identities regardless of their sexual orientation or gender identity. The event is intended to remind society of how diverse and colourful humankind is – hence the rainbow has become the symbol of gay parades all around the world. In Slovakia, Rainbow Pride is being organised by the Queer Leaders’ Forum civic association, the informal group Queers, and other civic initiatives.

“Rainbow Pride Bratislava 2010 is another important step towards accepting gays and lesbians in the public space,” said Romana Schlesinger, a spokesperson for the event. “It is also a march for the real equality of queer people in a comprehensive way, which would make accessible the institution of marriage for same-sex couples too, including the possibility of adoptions and assisted reproduction services.”

The history of gay pride marches, which today have become the symbol and manifestation of the empowerment of lesbian, gay, bisexual and transgender (LGBT) people, goes back to the Stonewall riots of 1969, during which gay people in New York protested against raids by police on local bars. Since then, a parade to commemorate the events has taken place annually – and over time the tradition of gay prides has spread around the world.

The organisers of Bratislava’s Pride event say it will provide space not only for people with different sexual orientation, but for anyone who appreciates the values of an open society and the concept of human rights for all.

Slovaks with no experience of such events tend to imagine Pride as a noisy carnival of allegoric floats carrying half-naked eccentric men and women wearing weird clothes and extravagant make-up. That, however, is not the intention of the organisers, who claim they do not want to provoke conservative elements in society. The Sme daily reported that some 700 people were expected to attend the event.

“We realise that it’s a specific event in the central-European context, and therefore we have asked the police for increased protection,” said Schlesinger, as quoted by Sme. Increased caution might be in order, given the negative experiences of some gay parades in the past in neighbouring countries, particularly Poland. Negative feelings towards such manifestations of difference have already been expressed by Slovaks too.

A week before the event, on May 15, dozens of people, mainly Catholics, who oppose Rainbow Pride Bratislava 2010, as well as being against homosexual relations as such, marched through Bratislava. The event, entitled ‘March for the protection of family and sovereignty of education of children’ was organised by the Association for Protection of the Family.

Their march started off with a prayer, after which they walked along the streets of Bratislava’s old town, carrying banners with slogans such as ‘Homosexual partnerships = Moral decay of society”.

“We haven’t come here to condemn homosexuals,” said the president of the association, Jozef Dupkala, as quoted by the Sme daily. “We have come here to say that homosexuality is a clear sin, which is a monstrosity before God, and that if these people continue committing this sin, they’ll get eternal hell, eternal damnation.”

The Association for Protection of the Family wants to ask the president, parliament and the government to pass legislation to ban prosecution for homophobia.

Such opinions may find a sympathetic ear among ruling politicians. Ján Slota, the leader of the Slovak National Party (SNS), which is a member of the governing coalition, said his party would come up with what he called “an appropriate reply” to the gay pride parade.

He said the response would “show them here, in the streets of the capital, that they are an undesired element,” Slota said in an interview with the TASR newswire. “I’ll be there in person, in order to spit on them,” he added.