FOREIGN investors’ love for a country is never unconditional and even cheap labour, low taxes and a good location are not always enough to buy their affections. For some time, investors in Slovakia have been growing more concerned about the lack of transparency in public procurement, the lack of predictability and stability in legislation, problems with the enforceability of the law, as well as what they see as the failure to fight corruption effectively. These sentiments have been flagged by major surveys conducted by foreign chambers of commerce in Slovakia. 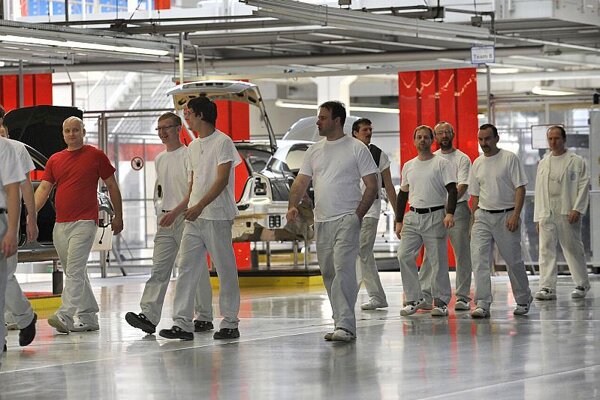 A flexible labour force is one priority for investors. (Source: TASR)
Font size:A-|A+0

FOREIGN investors’ love for a country is never unconditional and even cheap labour, low taxes and a good location are not always enough to buy their affections. For some time, investors in Slovakia have been growing more concerned about the lack of transparency in public procurement, the lack of predictability and stability in legislation, problems with the enforceability of the law, as well as what they see as the failure to fight corruption effectively. These sentiments have been flagged by major surveys conducted by foreign chambers of commerce in Slovakia.

But Slovakia’s Economy Ministry is confident that, despite changes that the global economic downturn has brought, the business environment remains one of the main competitive advantages of Slovakia’s economy.

In its report, reviewed by the cabinet of Prime Minister Robert Fico on May 19, the ministry claims that the current tuning of the business environment represents a good basis for the post-crisis restructuring process and for economic growth to be re-launched, the SITA newswire reported.

The report also lists some of the long-term problems in the business environment that foreign investors have identified, such as problems with the enforceability of laws and the high administrative burden of doing business. Regional infrastructure problems are also on the ministry’s list of problems that require a solution.

However, businesses have come up with their own list of priorities that they suggest the next government should pursue in order to improve the quality of Slovakia’s business environment. The Slovak Business Alliance (PAS) – this year in cooperation with the American Chamber of Commerce (AmCham) – has prepared its Wish List 2010, which includes demands in 10 key areas, according to PAS executive director Róbert Kičina.

The alliance has called on all political parties to publicly declare their attitude towards the requirements set out in the Wish List 2010. It points out that businesses have a significant share in job creation and GDP generation in the country.

PAS said that the better the information that citizens have at their disposal, then the better the decisions they will make in the elections, according to an official PAS statement from May 14.

“We are now waiting for politicians to comment on the Wish List,” Kičina told The Slovak Spectator, adding that PAS will be putting out the results.

Before the elections, the alliance will publish an analysis of the election programmes of the political parties in terms of how many of the wish list priorities have made it into their programmes, said Kičina.

The wish list includes a call to responsibly manage the country while securing macro-economic stability and curb public finance deficits. Businesses argue that the future leaders of the country should not hide the country’s indebtedness.

Improving the enforceability of the law and significantly shortening the length of court trials were also near the top of the wish list.

“From the AmCham perspective, foreign investors have strongly encouraged the Slovak government and politicians who will constitute the government after the June elections to decrease the administrative burden on businesses, to reduce rapid and non-systematic changes of legislation and to allow greater discussion and involvement of various stakeholders in the preparation of new legislation,” AmCham Executive Director Jake Slegers told The Slovak Spectator. “We also stress the fact that, as indicated by our survey, investors see transparency and corruption as important issues directly impacting foreign investors and the business atmosphere in Slovakia.”

PAS and AmCham would also like to see an end to the unsystematic revision of laws, and for the payroll tax burden to be eased. Strengthening the principle of private insurance within the social system while increasing the flexibility of the labour market based on models from developed European countries with long-term low unemployment rates are also on the wish list, according to PAS.

The wish list is not a new invention but is a document that PAS has prepared before previous parliamentary elections. This year, AmCham decided to support the idea.

With the “Wish List 2010”, AmCham’s contribution was based on the results of its 2009 Foreign Investors Survey and the policy recommendations to the Slovak Government arising from that survey, Slegers said.

“AmCham is in regular contact with representatives of the Slovak political scene,” Slegers told The Slovak Spectator.

Its most recent project, organised in cooperation with ten other foreign chambers of commerce in Slovakia, is the ongoing “Political Party Speaker Series - Slovak Parliamentary Elections 2010” featuring the eight most prominent political parties, said Slegers.

“This series of events, along with the recently-held “TA3-AmCham Leaders Forum”, a live televised debate among major political parties, enables AmCham members and representatives of various business sectors to hear and discuss the priorities of the relevant political parties focused on the potential improvement of the business environment in Slovakia,” Slegers said. “Therefore, AmCham’s main role is to facilitate open dialogue and relevant discussion between the AmCham membership and those seeking leadership positions in the next Slovak government.”

Referring to the record of the Fico government, Kičina said that the 2010 and 2006 wish lists are very similar since “problems and barriers in the business environment have not really been solved over the past four years”.

“In 2010, the requirement for introduction of the euro has been dropped, but demands for macroeconomic stability have been accentuated,” Kičina told The Slovak Spectator. “The need for increasing the flexibility of the labour market has emerged, along with a call for the government, through its declarations and activities, to consider the irreplaceable role of business in the structure of the economy”.

According to Kičina, less than 15 percent of businesses’ demands from 2006 have been fulfilled, with the worst marks being given to the application of ethical principles in the fight against corruption. The best evaluation went to macro-economic policies thanks to which Slovakia was able to adopt the euro. PAS said that the wish list is based on the long-term results of surveys among businesses in Slovakia.

In recent years, Slovakia has frequently been recognised as a country with favourable conditions for doing business. While Slovakia’s competitiveness has remained strong, areas for improvement and fine-tuning can still be identified, said Slegers.

“The limited supply of highly skilled and educated labour is one prominent issue frequently identified as problematic,” Slegers told The Slovak Spectator. “In addition, corruption and non-transparent public procurement are, in the opinion of the investors, significant threats to securing healthy conditions for doing business in Slovakia and ensuring the positive and sustainable development of Slovakia’s economy. In AmCham’s 2009 Survey, members expressed dissatisfaction with the current economic policy of the Slovak government and its response to the crisis.”