THE FINANCIAL and economic crisis has hit young people especially hard. Employment offices report that almost 30,000 school-leavers are waiting for their first job, while vacancies suitable for school-leavers number only in the hundreds. Experts ascribe part of this problem to the crisis and partly to an imbalance between what students are studying and what the market actually demands. They say the quality of schools, which are producing a labour force that is not fully prepared to meet the expectations of the modern market, is also a problem. At the end of March the Central Office of Labour, Social Affairs and Family reported a total of 27,625 school-leavers searching for their first job. Compared with the same period of 2009, when 18,280 school-leavers were searching for a job, this represented an increase of almost 10,000 – and of almost 17,000 compared to the situation just two years ago, when job offices reported 10,976 school-leavers searching for a job in March 2008. 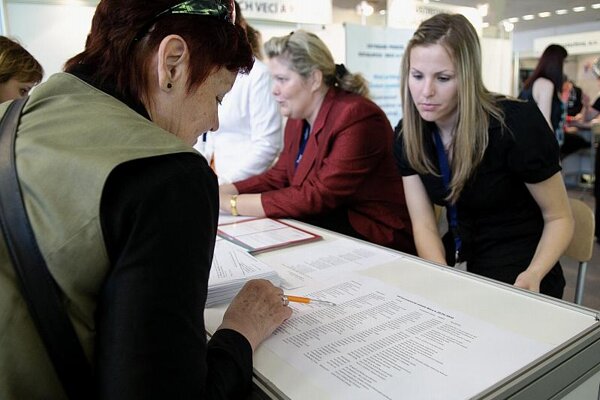 THE FINANCIAL and economic crisis has hit young people especially hard. Employment offices report that almost 30,000 school-leavers are waiting for their first job, while vacancies suitable for school-leavers number only in the hundreds. Experts ascribe part of this problem to the crisis and partly to an imbalance between what students are studying and what the market actually demands. They say the quality of schools, which are producing a labour force that is not fully prepared to meet the expectations of the modern market, is also a problem. At the end of March the Central Office of Labour, Social Affairs and Family reported a total of 27,625 school-leavers searching for their first job. Compared with the same period of 2009, when 18,280 school-leavers were searching for a job, this represented an increase of almost 10,000 – and of almost 17,000 compared to the situation just two years ago, when job offices reported 10,976 school-leavers searching for a job in March 2008.

Slovakia is not the only European country with a youth unemployment problem, but it has one of the biggest. According to data of the Organisation for Economic Co-operation and Development (OECD) from the last quarter of 2009, one in three young people in Europe is jobless. Slovakia ranked second, behind Spain, in terms of the reported number of unemployed people between ages 15 and 24.

Within the OECD, the youth (15-24 years) unemployment rate rose by 6 percentage points in the two years to the end of 2009, to reach almost 19 percent, the OECD wrote on its website. There are currently almost 15 million young people unemployed in OECD countries, about four million more than at the end of 2007. In countries like France and Italy, about one active youth in four is unemployed, while in Spain more than two in five are jobless. In Slovakia, the youth unemployment rate rose from about 20 percent in 2007 to over 32 percent in 2009.

The OECD expects the youth unemployment rate to remain high over the next two years and says many unemployed young people are likely to experience a prolonged period of joblessness.

According to an OECD paper released in mid April which focused on the rise in unemployment during the crisis, about 30-40 percent of school-leavers from upper secondary education in the OECD are estimated to be at risk, either because they have multiple disadvantages (the so-called ‘left-behind youth’) or because they face barriers to finding stable employment (the so-called ‘poorly integrated new entrants’).

In the short term, a key policy priority is to provide adequate support, especially to those youths most at risk of losing contact with the labour market. The jobs crisis may also be an opportunity to tackle underlying factors affecting the school-to-work transition, according to the OECD.

Slovakia experiences two annual waves of school-leavers reaching the labour market. Unlike retirees, who leave the labour market continuously, school-leavers flood the market twice a year. The first wave usually arrives at the end of the school year, i.e. in May or June, and the second strikes at the end of the summer holidays, i.e. in September or October, according to Michal Páleník of the Employment Institute, an employment think tank.

Since the generation currently arriving in the labour market is the smallest post-revolutionary generation, Páleník does not expect a dramatic increase in youth unemployment in Slovakia. But he admits that Slovakia has a problem with youth unemployment.

“Each European country has a problem with young people,” Páleník told the Hospodárske Noviny daily. “An employer would rather choose an experienced worker than a young man from whom he does not know what to expect.”

There are other reasons why school-leavers, along with people approaching retirement, have the most difficulty finding jobs.

“The main reason is that they do not have any working experience or habits,” Monika Martinková, director of the production and marketing division at HR firm Trenkwalder, told The Slovak Spectator, adding that another problem is that only a small number of vacancies are suitable for school-leavers. In the case of Trenkwalder, such openings account for only about 10 percent of the total.

Martinková identifies two groups of schools-leavers. The first group contains secondary schools graduates, who only find jobs with great difficulty. She sees their problem as being a lack of training in their specialisation and thus their ability to apply knowledge gained in practice. The second group are graduates from universities and high schools, whose employability depends specifically on their specialisation and the work experience which they have gained during their studies.

University arts graduates, for example from pedagogic faculties, are amongst the graduates with the lowest chances of getting a job in their area of specialisation, said Martinková.

One fact that does not help school-leavers is that high unemployment means there is a greater availability of high-quality applicants with work experience, she noted.

Lucia Burianová, spokesperson for Profesia, which runs the biggest Slovak internet jobs portal, does not expect positive development in the market any time soon.

According to Martinková, the market is saturated with school-leavers with general education in a certain segment, but there is only a small number with in-depth knowledge. There are a lot of school-leavers focused on economics or management but not many, for example, with the traditional skills required in the construction sector.

“School-leavers who studied to be carpenters or joiners will not have a problem finding a job for the time being,” she said, adding that the reviving automotive industry offers also work places for school-leavers.

Burianová, citing statistics from Profesia’s jobs portal, listed the most sought-after graduates as being those who studied information technology, civil engineering, economics, social sciences, and machinery and engineering. Graduates of law and pedagogic schools have the smallest chances of getting a job.

“Graduates from technical universities and school-leavers with practical skills obtained during their studies and a rich knowledge of languages will have a better chance of finding a place in the labour market,” said Burianová, forecasting future developments.

Supply does not fit demand

Another problem, which is older than the crisis itself, is the discrepancy between demand and supply in the market, since many students are learning skills which are not sought by employers and schools are failing to prepare workers to meet market expectations.

“Slovakia’s economy is mostly composed of industry and the IT segment,” Vladimír Baláž, a forecaster with the Slovak Academy of Sciences, told Hospodárske Noviny. “When young people choose human sciences they can hardly expect to make their way in the world.”

Martinková agreed, saying a particular problem of school-leavers is that their knowledge and skills do not guarantee to employers that applicants will have what they need. This means that a school-leaver is not a source of innovation in companies because he or she is not able to apply his or her knowledge in practice.

“Companies abroad give chances to graduates especially when they are well prepared and arrive with creative ideas to enhance the quality of work in the company, or its products,” said Martinková. “They are symbols of innovations. However, Slovak universities prepare graduates for this way of self-realisation only very slightly.”

One way out: work and study

Both Martinková and Burianová believe that students have their future careers in their own hands to some extent. They recommend that students start collecting practical experience in the sector in which they want to find employment, watch trends and attend training courses during their studies.

“A classical school-leaver, even with a good specialisation and excellent school results is not as interesting for an employer as a school-leaver with foreign experience, language skills and at least one long-term working experience,” said Martinková, adding that only a few school-leavers realise that for a position in which they are interested, a number of experienced people will also be applying. “Thus they should think about what extra they can offer, not only compared to their schoolmates but also to those with work experience, and this as the basis to make their pitch.”