Flooding across Slovakia after heavy rains

EASTERN Slovakia experienced flooding after heavy rains in mid May, accompanied by unusually cold weather. Media reported that Slovakia had not seen such heavy rain at this time of the year for the past 13 years and temperatures had hit 60-year lows. 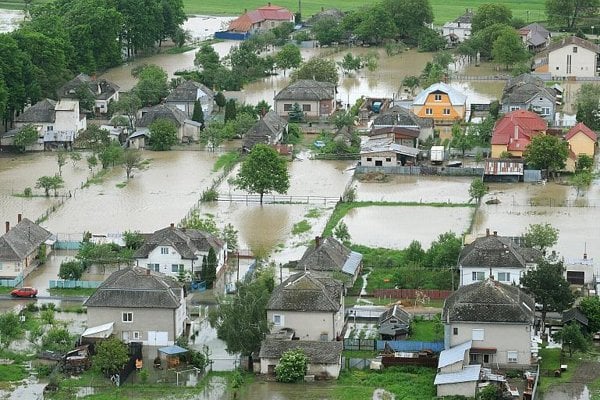 EASTERN Slovakia experienced flooding after heavy rains in mid May, accompanied by unusually cold weather. Media reported that Slovakia had not seen such heavy rain at this time of the year for the past 13 years and temperatures had hit 60-year lows.

Floods claimed the lives of seven people in central Europe, one of them in Slovakia, the Reuters newswire reported. A 62-year-old Slovak man drowned in the village of Nitrianske Sučany. In addition to hard-hit eastern Slovakia, northern Slovakia was endangered by flooding from the Kysuca River and the Záhorie region in the far west of the country evacuated some families because of the rising level of the Morava River, the Sme daily reported.

Prime Minister Robert Fico summoned an emergency meeting of the national crisis management team on May 17 at which time the south eastern part of Slovakia and the Kysuce and Orava areas in the north were designated the most threatened regions. A third-level flood alert was declared in these areas and 3,700 soldiers were on standby, ready to be deployed in the event the situation worsened, the SITA newswire reported.

An emergency situation was declared in the district of Trebišov in Košice Region when the Ondava River broke through a dam on May 18. Interior Minister Robert Kaliňák travelled to the site and told journalists that the situation was under control thanks to the crisis team, which had sufficient staff and machinery.

The flood waters, however, continued to threaten Trebišov and the crisis management team was prepared to evacuate approximately 150 residents. Kaliňák said he was glad no one died in eastern Slovakia.

“But material losses are great, because many localities of Slovakia were flooded and many houses and cellars were under water,” Kaliňák said, as quoted by SITA. “In the east we have around 100 soldiers, 140 fire fighters plus dozens or hundreds of volunteers helping with the rescue works, and around the same number of people were deployed in the northwest.”

On the morning of May 20 newswires reported the flooding situation had calmed in eastern Slovakia but that the third-level alert remained in effect on some local rivers. Dušan Mydla from the Košice branch of the Slovak Water Management Company told the SITA newswire that the situation remained complicated because many of the smaller local rivers were expected to reach their highest levels over the weekend of May 22-23.

“We hope to manage it,” SITA quoted Mydla as stating, adding that property and human lives were no longer endangered.