Party in the USA and welcome to Slovensko

MY ARRIVAL in Bratislava was most unceremonious; I arrived before a coat of heavy rain set in over the capital for days. Jetlagged and exhausted at the airport in the Austrian capital Vienna, I proceeded to exchange just enough money to board a bus to Slovakia. The airport’s criminal exchange rate dwarfed my US $20 considerably and was just enough to cover the cost of a prosciutto sandwich and a bus ticket. 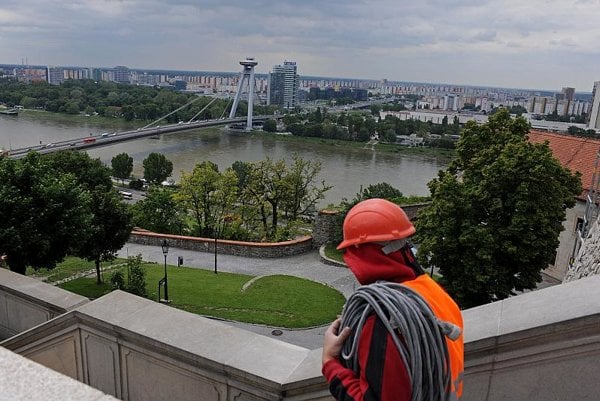 MY ARRIVAL in Bratislava was most unceremonious; I arrived before a coat of heavy rain set in over the capital for days. Jetlagged and exhausted at the airport in the Austrian capital Vienna, I proceeded to exchange just enough money to board a bus to Slovakia. The airport’s criminal exchange rate dwarfed my US $20 considerably and was just enough to cover the cost of a prosciutto sandwich and a bus ticket.

When I checked my luggage beneath the bus at the cost of €1, I thought I had not enough money to go to Slovakia. “Student?” the driver asked in German when I boarded. I nodded my head. Amazingly, the discounted fare left me with a few coins of little value in my hand.

Forty-five minutes later and just a quarter of an hour before arriving at Bratislava’s main train station, my ring tone of choice on my cell phone alarm clock blared the trashy American pop song, “Party in the USA!” Once I crossed the border, no one would know this song and instead it would be Miley Cyrus’ more mature compatriot, Lady Gaga, whose tunes would greet me nearly everywhere, from Julius Meinl cafés to the large, luxurious supermarket at the Tesco in downtown Bratislava.

I looked out the window in time to notice as we crossed the border into Slovensko. Twenty- one years after the Iron Curtain fell and the West declared itself victor, this was as demure of a border crossing as it comes: a mere gate and hello Slovakia! It was as casual as one of my first times encountering the Slovak border as a college student in southern Poland and northern Slovakia, aboard a traditional raft where the border is quite literally unmanned and two opposing flags sit in the countryside.

I have travelled to Slovakia before a few times before, but only to the country’s eastern half where one of my best friends, Zuzka, lives with her boyfriend and her family near to Košice, Slovakia’s second largest city. It is a few years since I last visited the country in 2007 and already much has changed.

Prices have increased thanks to the introduction of the euro last year. Bratislava is not an expensive place, but the Slovak koruna would have made it less so. The excitement of joining the European Union and NATO has given way to a new wind of Euroscepticism, entirely healthy but perhaps better felt at one’s leisure than in time of crisis. But the proximity and post-Cold War accessibility of Vienna serve as reminders – at least in the capital – that even the Eurocrats in Brussels have their purpose.

In Bratislava, a city I had never before encountered in my travels, I am entirely grateful to feel at home in more ways than one. The wind and rain my first several days were not unlike the internationally-renowned terrible weather of my hometown, Chicago. The attitudes of belonging to a second city as opposed to a global powerhouse also mimic Chicago and imbue Bratislava with a liveable air, or rather few airs.

For a city with as dynamic a past as Bratislava, the one-time seat of the Hungarian monarchs when the Magyar lands to the south were occupied by the Ottomans, the absence of arrogance may be an organic response to how such attitudes were undermined during years of occupation. The Hungarians were not alone: the imposition of a Czechoslovak state after the First World War meant the centre of gravity shifted to Prague well before the Soviets came through to clean up, or rather rewrite, history and set up apartment blocks like so many shoddy plastic houses and hotels on a Monopoly game board.

If a city is uncertain of whether or not it is a city or a mere town, as many Bratislaváci seem to be, the fate of such a place can go in a few directions. If the inhabitants are arrogant, self-possessed and driven more by ambition than talent than it can perhaps go in the direction of a place I hated to live in the past year: Washington.

But despite being a capital city in an asymmetric location, nearer to Vienna than much of Slovakia, Bratislava is a real city because it has the genuine insecurities of one. After all, even arrogance is a product of insecurity, so perhaps I should give even Washington more credit than it perhaps deserves. Yet, I do prefer Bratislava.

In the coming five weeks I will travel far and wide across Slovakia, the country the tourism board appropriately calls “little big country,” to report and experience the myriad people, places, and tastes for The Slovak Spectator’s annual Spectacular Slovakia guide. It is simply awesome to have such an opportunity, especially as I question whether or not the authors of other guides have actually visited the country.

Lonely Planet’s latest Czech and Slovak Republic guide says “more than a few of the museums are quite boring (we’ve listed the best)” with the sort of deadpan disinterest that suggests an absence of the most basic understanding of what might actually be interesting, often times the seemingly uninteresting. If such shortcuts are possible, I can imagine others were made along the way.

Already I have begun to get a sense of the contrasts Slovakia presents and am baffled by a few things, like the apparent absence of the concept of dual ethnicities within the rubric of Slovak nationality. With any luck though I will leave Slovakia knowing as much Slovak as the Slovaks and in much the same style that I entered, still able to party in the USA.