Rainbow shines even through tear-gas

THE FIRST-EVER Gay Pride march in Slovakia Bratislava heated the streets of Bratislava on May 22, the day it took place, perhaps as much as it inflamed public debates prior to the event. Despite local extremists calling the gays and lesbians obscene names, some participants getting attacked with tear-gas, and the march being rerouted because of concerns over security, organisers claim the event was a success for the community of non-heterosexual people living in Slovakia. 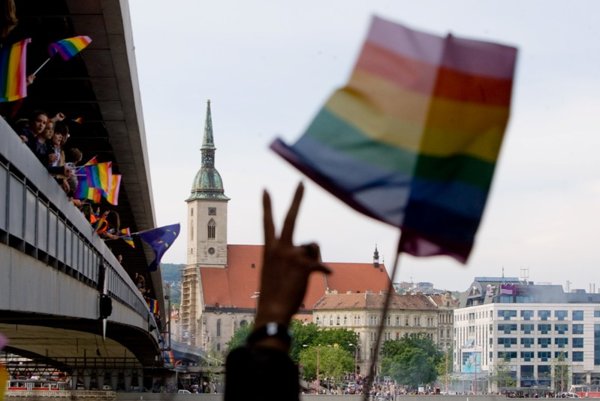 THE FIRST-EVER Gay Pride march in Slovakia Bratislava heated the streets of Bratislava on May 22, the day it took place, perhaps as much as it inflamed public debates prior to the event. Despite local extremists calling the gays and lesbians obscene names, some participants getting attacked with tear-gas, and the march being rerouted because of concerns over security, organisers claim the event was a success for the community of non-heterosexual people living in Slovakia.


Tear-gas and other obscenities


Rainbow Pride Bratislava 2010 kicked off at Bratislava’s largest downtown square, Hviezdoslavovo Square, where several hundred people gathered for speeches and concerts. Around 100 anti-gay protesters started attacking the parade almost immediately and dozens of supporters of the People’s Party-Our Slovakia (NSLS), a newly-created political party led by former leaders of a banned extremist movement called Slovenská Pospolitosť, were among them. They made several attempts to disrupt the crowd of Rainbow Pride participants by throwing tear-gas canisters, rocks and eggs at the gathering as well as at the speakers on the stage.

Julius Kolenič from the non-governmental organisation Inakost said he was at the square when someone threw a tear-gas canister close to where he was standing. He also saw a stone thrown by someone at Ulrika Lunacek, a member of the European Parliament, while she was speaking to the crowd.

In response to the violent attacks, the Pride organisers decided to modify its programme and the route of the march: the originally-planned march through the streets of Bratislava’s Old Town was cancelled and the Pride participants marched only from the square across the city’s New Bridge spanning the Danube River to a ship anchored on the southern bank where an after-party took place.

“I was disappointed by the decision of the organisers who announced that on the recommendation of the police the Pride march would not take place on its originally-set route across the city centre, because there were extremists in the streets and the police couldn’t guarantee the safety [of the participants],” Kolenič told The Slovak Spectator. “What kind of society is this, where a man cannot move freely in the streets?”

Peter Weisenbacher, one of the organising staff, noted that the march was not actually cancelled, only postponed and redirected.

The police reported 29 people were arrested from among the extremists attacking the participants.


Were the police prepared?


The Slovak press, activists and some of the participants in the Pride march criticised the police, saying they had failed to prepare for the event sufficiently by undertaking increased security measures.

But Weisenbacher said he was satisfied with the cooperation by the police, adding that despite small missteps they were grateful for the protection.

“We are concerned that the problem was higher – that there wasn’t political will or high-level order to take this event seriously and to protect it,” Weisebacher said. “We consider this to be mainly the failure of Interior Minister Robert Kaliňák who even cynically said on TV on Sunday that we should’ve paid for our own security services. Now we are not sure whether the minister knows what the police that he leads are meant for in a democratic state.”

Interior Minister Robert Kaliňák said on the private Markíza TV channel on May 23 that he was satisfied with the police action at the Pride event.

“The police were certainly sufficiently prepared, but the police absolutely shouldn’t be exchanged for the organising staff of the march of homosexuals and lesbians,” he said, as quoted by the SITA newswire. He said the organisers should have hired a private security service.

He also confirmed that the police detained 29 extremists who were demonstrating against the march and attacking the participants.

As for the change in the event’s programme, he said it was the decision of the organisers.

“The only ones helped [by the participants of the Pride march] were the extremists, because it helped them to get visible once again,” Kaliňák said, as quoted by SITA, adding that the timing of the Pride event was unfortunate, before the parliamentary elections.


Politics in the Pride


None of Slovakia’s political parties publically supported the Pride event even though it took place at the very start of the official political campaign, just three weeks before Slovakia’s parliamentary election.

Weisenbacher said the extremist attacks on the Pride rally and march were not only an expression of what he labelled criminal fascist ideology on the part of the extremists who he said are not supported by anyone and are in a way “pitiable people who solve their personal frustrations by explosions of aggressiveness”. The main problems, he said, were the intolerant, hateful statements addressed against the Pride event and against the lesbian, gay, bisexual and transgender (LGBT) community in general that were made in recent weeks and the lack of positive, supportive statements from any Slovak politicians.

Kolenič agreed that extremists can be found in every country and while it is up to the police to control their actions, politicians should make more effort to condemn their attitudes. He believes the police had the best intentions and took efforts to protect the participants in the march (despite some mistakes), but that it is the politicians who carry the real responsibility.

“Nobody condemned their [extremists’] attack sufficiently, no political party reacted,” Kolenič said. “Who should the citizens rely on then? Who should they vote for? Who represents their interests and stands on their side when they become a target of attacks? Are they all really such cowards before the elections? I’m sure Slovakia doesn’t need politicians like them.”

According to Kolenič, new politicians who would protect and stand behind human rights principles should get a chance in politics.


Media reports tended to focus on failures by the police – giving the impression that the Pride rally and its march failed. But the LGBT community sees it differently and the organisers claim the event was a success.

“When we crossed the New Bridge, it wasn’t possible to see the end of the parade from its head, the whole bridge was coloured like a rainbow,” Weisenbacher said, adding that never before had there been such an big event to support the LGBT minority, and he even called it one of the biggest human rights events in Slovakia in the last 10 years.

“It was a great success, not only for gays and lesbians, but mainly for ordinary Slovaks who have shown that they accept minorities and that their rights are important for them also,” he said. “Now it’s the politicians’ turn to listen to them and start dealing with the rights of LGBT people seriously.”

According to Weisenbacher the organisational staff met immediately one day after the parade and took a clear decision to continue their efforts and to organise another pride event next year.

“We’ve got hundreds of supportive messages and congratulations from the whole world and euphoria rules in the community,” he said. They have already established a group on Facebook in which they claim they want the message of the Pride event to linger and they are already planning to organise the second edition of Bratislava’s Rainbow Pride in 2011.

Organisers are asking people to donate money to their cause, since as they wrote on their website, they are in red numbers [in financing the event] and some of the organisers had to reach into their own pockets to finance Rainbow Pride, especially after they were fined for leaving Hviezdoslavovo Square one hour earlier than planned without having cleaned the public space.


Amidst criticism that Slovak society did not show much enthusiasm or tolerance for Rainbow Pride and that this fact encouraged and gave support to the extremists to undertake violent acts, the organisers stress that it is important for the LGBT community to continue to demonstrate their existence in the public domain, arguing that Rainbow Pride also has a political connotation because it speaks to human rights.

“We cannot speak for everyone, but for us it was important to show that we are here, that we want our human rights, and that 20 years after the revolution it’s about time for comprehensive equalisation of all minorities,” Weisenbacher said. “In the Slovak circumstances the aim obviously was also breaking down dangerous stereotypes which some part of the public still believes in because of television or movies.”

Kolenič agreed that the march is an important public call by minority citizens for their rights.

“It’s necessary to show the public, but mainly the politicians and extremists, that we are here and we are resolved to fight for our rights,” Kolenič said. “We ask for nothing extraordinary. For me, it’s important that the law guarantees us our right for a decent life with our partners within the legal security of uniform state rules.”