PRIME Minister Robert Fico sued Slovakia’s Sme daily last September over a cartoon it had published in the summer of 2009. Now Martin “Shooty” Šútovec, the author of the cartoon, which depicted the prime minister as lacking a spine, will have a new cartoon displayed on about 200 billboards and eight big-boards at different locations throughout Slovakia. Šútovec also plans to distribute 200,000 stickers, 100,000 postcards and his work might even be printed on cash register receipts. 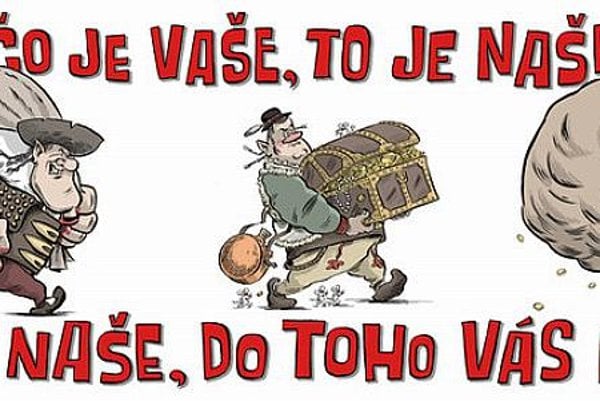 PRIME Minister Robert Fico sued Slovakia’s Sme daily last September over a cartoon it had published in the summer of 2009. Now Martin “Shooty” Šútovec, the author of the cartoon, which depicted the prime minister as lacking a spine, will have a new cartoon displayed on about 200 billboards and eight big-boards at different locations throughout Slovakia. Šútovec also plans to distribute 200,000 stickers, 100,000 postcards and his work might even be printed on cash register receipts.

The theme of Shooty’s multi-media campaign will be a cartoon featuring Smer head Robert Fico, Movement for a Democratic Slovakia (HZDS) leader Vladimír Mečiar and Slovak National Party (SNS) chair Ján Slota depicted as bandits lugging away loot under the slogan “What is yours is ours; what is ours is none of your business”.

Who will pay the bill? As of May 27, the cartoonist had received donations of over €60,000 to his account from friends and concerned citizens who want to see the cartoon of Fico, Mečiar and Slota appearing on mega-billboards throughout the country. More than 2,000 citizens have so far contributed to Shooty’s efforts, Sme reported.

Šútovec’s original idea was to rent just a couple of billboards to display his caricatures and he had intended to pay the estimated €5,000 for the billboards out of his own pocket. But when he posted an appeal on the internet, the response exceeded all his expectations.

“I had not expected it; the reactions of people have surprised me,” Šútovec said when commenting about people who have reached into their pockets and made, on average, donations of about €20 to support his idea. Šútovec announced, however, that he would not accept donations from any political parties or from people running for a political office and he has already sent back two donations, Sme wrote.

A few donations to Shooty’s billboard campaign, however, were well above the €20 average. Jozef Kučerák, a previous deputy prime minister for economy, donated €2,500.

Sme noted that Shooty’s billboard campaign has been far more successful than an ongoing collection for financing a sculpture of Svätopluk, one of the rulers of the Great Moravian Empire which Slovaks consider the original Slovak state.

Since mid-April Svätopluk’s account has received donations of about €83,000 while Shooty has collected over €60,000 in just a couple of days with contributions still rolling in.

Šútovec had been in the spotlight for several months before he launched his successful fundraising. His cartoon published by Sme last year depicted an overwrought man with a red tie being told by his physician that since his x-ray shows he has no spine, his cervical spine problems could only be “phantom pains”.

Fico has demanded €33,000 in damages from Sme, saying that the cartoon made fun of his serious health condition while at the same time ridiculing him. Sme published the cartoon in July 2009 at a time when Fico was reported to be suffering from cervical spine problems and had cancelled several announced appointments. The government office, however, declined to answer questions about his condition at that time or subsequently.

Political observers say that being subject to public scrutiny – and sometimes ridicule – comes with the territory of public office.

Shooty is not, however, the first cartoonist to become part of this year’s election campaign. A cartoon by Milan Vavro appeared on billboards at several locations in Bratislava in which a smiling and fearless-appearing Robert Fico is being attacked by much smaller caricatures of journalists. Journalists with insignias from the Sme, Pravda, Nový Čas and Plus Jeden Deň dailies are depicted shooting at the prime minister, spitting fire at him, and even trying to drop a bomb.

Vavro is known as a one-time fan of Vladimír Mečiar when he was drawing cartoons for the Mečiar-friendly dailies Nový Deň and Slovenská Republika, newspapers which have since ceased to exist.

Vavro said that the cartoon was drawn on his own initiative and claimed that the Slovak media paints a one-sided picture of Fico. The cartoonist said that he cannot present his opinion in the print media so that is why he ordered the billboards. According to Sme, Vavro refused to reveal whether anyone had paid for the cartoon or the billboards.

The Smer party has a section on its webpage called “Have a Laugh” which features several of Vavro’s cartoons, most of them ridiculing the opposition Slovak Democratic and Christian Union party (SDKÚ) as well as Slovak journalists.

One of the cartoons on the website depicted a man in a wheelchair being told by his doctor ‘You will not get your pension, because you have wheels’. The cartoon was a parody of a past decision by the government led by SDKÚ to reduce the number of people eligible for disability pensions. The spokesperson for Smer, Katarína Kližanová-Rýsová, told Sme that Fico ordered the cartoon to be removed after he found out that it was on the party’s website.