Blessing masquerading as a curse

A BLESSING masquerading as a curse is how small, export-oriented economies within the eurozone should assess the recent weighty devaluation of the common European currency, according to economic experts. 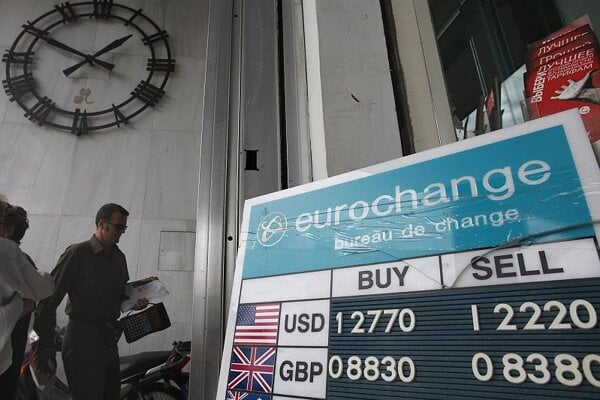 The euro has fallen rapidly against the US dollar. (Source: TASR/AP)
Font size:A-|A+

A BLESSING masquerading as a curse is how small, export-oriented economies within the eurozone should assess the recent weighty devaluation of the common European currency, according to economic experts.

Market watchers interpret the weaker euro, vis-a-vis the US dollar, as an opportunity to initiate a stronger recovery among Slovak companies that are exporters to Europe and other parts of the world, as well as making Slovak products more competitive against products manufactured in Asia or other dollar-dominated countries.

Greece’s public debt crisis and the subsequent mega-loan that the European Union countries and the International Monetary Fund will use to prop up the country, which is torn by internal tensions, has taken its toll on the value of the euro. It has experienced a rapid 13 percent fall against the dollar, the sharpest decline over the past five years.

“The dollar is considered a safer harbour, one in which investors seek refugee in times of uncertainty,” Eva Sadovská, an analyst with Poštová Banka, told The Slovak Spectator. “This leads to a weakening of the euro as well as the currencies of our neighbours.”

But market watchers universally say that Slovakia should not yet cry over the weakening value of the euro since the uptick this can give to its export industries will overshadow the pains from costlier dollar imports of gas and oil from Russia.

“Weakening of the euro vis-a-vis the US dollar is good news for the eurozone's export industry, since the USA, along with the United Kingdom, rank among the most important export partners of companies in the eurozone,” said Volksbank chief analyst, Vladimír Vaňo. “Moreover, weakening against the dollar also means weakening with respect to many Asian currencies, such as Chinese renminbi, for which the US greenback is the main reference currency.”

According to Vaňo, the weak euro provides a foreign exchange advantage for the still fragile export-led recovery of industrial producers in the eurozone. Moreover, he added that it lessens the burden of price competition from cheaper imports, not only from Asia.

“For US dollar countries, importing goods from economies of the eurozone, including Slovakia, becomes cheaper and more attractive,” Sadovská said, adding that it is positive especially in these times when revival of American consumer demand is beginning, which is important for the eurozone.

Since approximately half of Slovak exports are destined for the eurozone, good news for the industrial companies within the zone is also good news for Slovak suppliers. Slovak exporters, moreover, get a foreign exchange advantage in eurozone markets when competing there against US or Asian companies, Vaňo noted.

“Sure, a weaker euro means a foreign exchange disadvantage as far as the eastern commodity imports are concerned,” Vaňo told The Slovak Spectator. “Since inflation is almost practically a non-issue in Slovakia, the potentially negative effects of pricier dollar imports of gas and oil from Russia is definitely overshadowed by a euro boost for Slovak export industries.”

Sadovská agrees that oil and other raw materials being imported to the eurozone under the influence of a weaker euro will become more expensive, which might have a negative impact on inflation.

“However, one should note that oil prices are now 12 percent lower than 6 months ago, which to a certain degree compensates for the effect of the weaker euro,” Sadovská said.

As to the impact that the weaker currency will have on European financial markets, Vaňo says that a big emerging topic among equity investors is pinpointing which particular stocks could get the biggest boost in performance from a weaker euro.

“Weakness in the euro vis-a-vis the dollar is to an extent also mirroring a stronger recovery overseas and the associated outlook for faster [interest] rate hikes there, as well as ongoing solid demand from foreign investors for US assets. In March alone, the net inflow of long-term foreign capital to the US surged to a record high of $140.5 billion,” said Vaňo, adding that it was the same month when the first notable new job creation – to the tune of 230,000 – was recorded overseas.

On the other hand, the weaker euro makes investment in Europe cheaper for many foreign investors, he added.

Slovakia has been fixing its sights on Germany ever since the outbreak of the financial downturn and now developments in the German economy give the central European country some guidance about the likely impact of the weaker euro.

“Our largest trade partner is Germany and exports to Germany represent about a fifth of our total exports,” said Sadovská. “If that country is doing well then it has a positive effect also on our exports and the whole economy of Slovakia.”

It does seem that thanks to the weaker euro Germany will be able to create tens of thousands of new jobs, she added.

Meanwhile, the German Chamber of Trade and Commerce expects that because of the weaker euro, exports from Germany this year might swell by €5 billion, which could create about 80,000 jobs in export-oriented industries, the Sme daily wrote.

A weaker euro would therefore help to close the gap of spare capacities in European industry through a faster recovery in production, Vaňo explained.

“The same holds true in Slovakia and the major labour market benefit can thus be expected for those suppliers to eurozone manufacturers who may come to Slovakia to build new facilities or will be forced to expand their existing capacities, for example to geographically optimise production in several locations,” Vaňo told The Slovak Spectator.

Regarding the industrial sectors that could benefit from the weaker euro and the associated exchange rate disadvantages it brings to Asian imports, Vaňo suggests that these are the lowest value added industries, “which have been between the rock of recession and the hard place of cheap imports for quite some time”.

The biggest advantage from a weaker euro could be felt by all suppliers to German and other European exporters, ranging from processing of metals and metal products, through the chemical industry and rubber processing, Vaňo added.

“As a matter of fact, the weak euro actually boosts the overseas price competitiveness of the SUVs of the three major European brands – Porsche, VW and Audi – that are assembled near Bratislava,” Vaňo said. “The US is one of the major markets for these Slovak state-of-the-art automotive products even though they were not really the best fit for times of recession, which was well seen in last year’s vehicle production statistics in Slovakia, which was fortunately alleviated somewhat by two other auto assembly facilities focused on the more affordable segments of the car market.”

Market watchers are rather careful in assessing how the euro’s value will develop during the upcoming months as well as how this will impact businesses over the longer term.

Firms exporting to dollar-based countries should be able to increase their production and profitability, Sadovská suggested. But she added that it is difficult at this point to calculate the concrete impact on firms’ revenues or profits.

“It also is difficult to predict the future development of the euro against the US dollar,” Sadovská stated. “What is certain though is that the weaker euro in relation to the dollar is an advantage if we export more than we import from the dollar countries, which is the case with Slovakia.”

According to Vaňo, the discussion over the ability of eurozone to effectively reform its current institutional financial framework might further weigh negatively on the euro-dollar exchange rate and it might change dramatically – especially if the exchange rate breaks through the level of €1.2134 to $1, which would mark one-half of the gain that the euro recorded against the dollar between 2000 and 2008.

For more news about Slovakia in English please go to spectator.sme.sk

With less than two weeks to go before national elections, the opposition and government blocs are in a dead heat, with the results too close to call . Also cartoonist enters election campaign .

The revelations about Smer’s off-the-books financing have significantly increased the party’s political isolation. Until now, only the opposition SaS and SDKÚ parties have rejected working with Mr Fico after elections. But last week, the Christian Democrats and a Hungarian opposition party hopped on the bandwagon .

The background to this political crossfire was a law passed by the Hungarian parliament on Wednesday that makes it easier for ethnic Hungarians in neighbouring countries to gain Hungarian citizenship.

The last 10-kilometre stretch of freeway between Bratislava and Žilina was opened over the weekend. The 200-kilometre journey between the two cities now takes about 90 minutes by car.