WHAT an American voter might look forward to as a highlight of a spirited election campaign turned out to be pretty much a ho-hum affair for Slovak voters. The face-to-face television debate between the head of the ruling Smer party, Robert Fico, and the leader of the largest opposition party, Iveta Radicova, broadcast two weeks prior to the elections, left viewers with few surprises and many questions about possible bias of Slovakia’s public-service broadcaster. 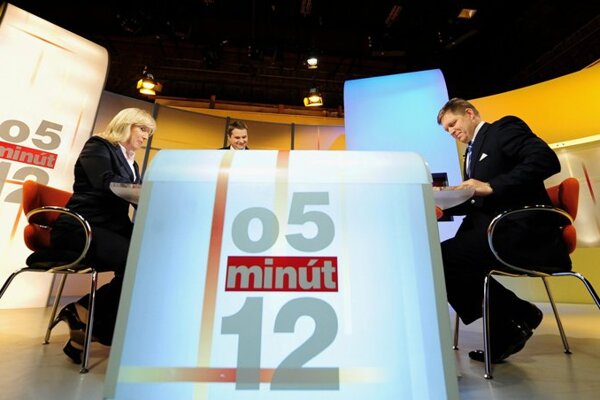 WHAT an American voter might look forward to as a highlight of a spirited election campaign turned out to be pretty much a ho-hum affair for Slovak voters. The face-to-face television debate between the head of the ruling Smer party, Robert Fico, and the leader of the largest opposition party, Iveta Radicova, broadcast two weeks prior to the elections, left viewers with few surprises and many questions about possible bias of Slovakia’s public-service broadcaster.

The duel, as the Slovak media called it, was broadcast on May 30, as a segment of the Sunday debate programme on public-service Slovak Television (STV).

It was the first time since he assumed power in 2006 that Fico had agreed to a television debate with a representative of the Slovak Democratic and Christian Union (SDKU). In February of this year, he faced off against Jan Figel of the Christian Democratic Movement (KDH) on TV. Other than those two meetings Fico had appeared on STV and Slovak Radio (SRo) only without an opponent.

Political analyst Grigorij Mesežnikov believes that the reason Fico agreed to the debate might have been the fact that he believed the selected topics – Slovak-Hungarian relations and the impact of the economic crisis on Slovakia – were solid ground for him, adding that Fico can be particularly convincing on Hungarian issues.

“In this respect he is consistent. He acts like the leader of a tribe – he just accuses everyone else of national treason,” Mesežnikov said.

Mesežnikov thinks another reason for accepting the debate was that Smer recognised that its support was dwindling and hoped that Fico’s appearance on TV might bolster the party’s sagging popularity – especially in light of the warning signs last week from the Czech election in which centre-right parties outpolled the social democrats, leading to the resignation of party leader Jiri Paroubek, a long-time Fico ally.

“It became clear that voter support for the social democratic party indicated in the pre-election polls was somewhat less than expected,” said Mesežnikov.

Hungarian card in the debate

Besides the obvious subject of the economic crisis and its effect on Slovakia, STV chose the much more volatile issue of Hungary’s recently amended double citizenship legislation which provoked immediate reaction in the Slovak parliament and has become one of the most hotly-debated issues in the campaign.

Fico defended the government-proposed legislation recently passed by parliament which automatically strips Slovak citizenship from anyone who voluntarily requests citizenship from another country. The Prime Minister repeated his harsh statements towards Hungary, saying that a brown plague is spreading to Slovakia from the south.

“There’s a conflict of values with a state where we feel Great-Hungarian nationalism,” Fico said.

Radičová agreed that the actions of the newly-elected Hungarian government were unacceptable, but made the point that that many Hungarians, past and present, have disagreed with their leaders’ views and have maintained strong relations with their Slovak neighbours.

In response, Fico claimed the former rightist Slovak government of which SDKU was a part along with the Hungarian Coalition Party (SMK) went too far in coddling the Hungarian minority to the point that “many ethnic Hungarian living in Slovakia don’t speak Slovak at all”.

Radičová continued in her non-confrontational tone which she has maintained throughout the campaign. She did not attack Fico as the representative of a party which has been criticised for a number of failures, including non-transparency and corruption. She only mentioned the rise of corruption as a marginal issue, noting that statistics indicated that Slovakia’s international rating regarding political corruption has deteriorated under Fico’s government.

To this Fico snapped, “Statistics are one thing, evidence is another.” He followed with a remark as to the financing of SDKU, but then added, “I didn’t open the corruption topic; I only reacted to the remark by Ms Radičová”. Radičová then suggested that Fico take this up with SDKU party chairman Mikulas Dzurinda. “I’m not interested in the past of SDKU, I’m focused on the future of SDKU,” she said.

These were the only remarks in the entire debate relating to government corruption and campaign financing irregularities.

Observers evaluated the debate in one voice as one which brought no surprises. The general opinion was that Fico won.

“To be honest, it didn’t surprise me at all,” Mesežnikov told The Slovak Spectator. “I expected one participant to be aggressive, arrogant and misleading, and the other to be moderate, non-confrontational and not very assertive.”

In Mesežnikov’s view Fico defeated Radičová this time around but not because he did anything extraordinarily well. “He only repeated his old tricks, such as arrogance, misleading statements and shifting of meanings. This is what he usually does and he did it here again, perhaps knowing that he wouldn’t get a tough, critical response from Radičová.”

Mesežnikov does not expect the duel had much influence on undecided voters, also due to the fact that he believes most of those who actually watched the debate were backers of one or the other politician.

“This kind of debate cannot really influence the voters unless something earthshaking happens in it, or if one of the participants comes up with some intriguing information or performs extraordinarily well,” Mesežnikov said, adding that nothing of that sort happened on May 30.

A Polis poll taken for the Sme daily carried out via telephone on Sunday after the duel took place had Fico the clear winner. Of the 534 persons polled, 51.4 percent found Fico more convincing. Iveta Radičová managed to convince only 27.3 percent. At the same time more than 76 percent of those polled said their voting decision was not influenced by the debate.

Questions emerged over the fact that Fico accepted the duel broadcast by public-service STV, but refused to appear in a debate against Radičová on the private Markíza TV channel. Media watchdogs have stated in the past that STV tends to present the prime minister in a positive light and have expressed concerns of bias on the part of the broadcaster.

MEMO 98, a non-governmental think-tank that regularly monitors the appearance of politicians and political parties during election campaigns on Slovak TV stations, monitored the main evening news on STV and three private TV channels during two weeks between May 8 and May 21, focusing on the quantity of coverage the political parties received in the news programmes, as well as the nature of the coverage (positive, neutral, or negative).

According to the MEMO 98 report, coverage of the government prevailed in the airtime on all stations. However, on the private channels, the coverage dropped or remained on the same level as during previous monitoring, while coverage on STV of the government’s activities increased by 50 percent, with the government getting 64.6 percent of the air time.

STV also was the broadcaster which brought more positive than negative news concerning the government, with positive and neutral news taking 98 percent of all the government-related news.

STV limited its coverage of the election campaign activities of opposition parties. Prime Minister Robert Fico received more attention than all the other candidates combined, according to MEMO 98.

“This marginal reporting on the political campaign on STV raises questions about how it fulfils its public-service information role,” MEMO 98 stated in its report.

Stanislava Benická, an expert on TV news who evaluated the debate for the Sme daily, also criticised STV for the debate. She said the programme was wrongly focused on the past, rather than on the future.

“I would have expected an extraordinary approach from STV, given the extraordinary situation that Robert Fico sat down at a table with an opinion opponent,” Benická said, as quoted by Sme.