THE COLLECTION of reports on the state of human rights in Slovakia which point to unresolved issues of discrimination against Roma at all levels of society was expanded by another document – a section of the report prepared by Amnesty International (AI) entitled The State of the World's Human Rights focusing on Slovakia. 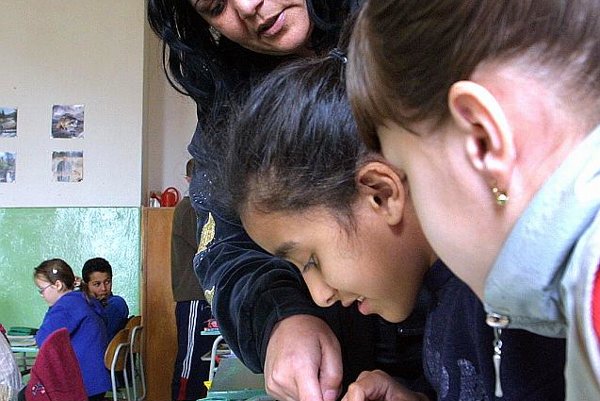 THE COLLECTION of reports on the state of human rights in Slovakia which point to unresolved issues of discrimination against Roma at all levels of society was expanded by another document – a section of the report prepared by Amnesty International (AI) entitled The State of the World's Human Rights focusing on Slovakia.

The 2010 report by the human rights organisation “documents abuses in 159 countries and shows how powerful governments are blocking advances in international justice by standing above the law on human rights, shielding allies from criticism and acting only when politically convenient”, according to Amnesty International’s website. One section of the report devoted to Slovakia analyses the situation facing the country’s Roma minority.

“Roma continued to face discrimination and violence at the hands of both state authorities and private individuals, and were still largely denied equal access to education, housing and health,” the summary reads.

According to Martina Mazúrová, the campaign coordinator of Amnesty International Slovakia, huge numbers of Roma children are denied the right to education. They are placed in ‘special schools’ or classes for children with mental disabilities despite not having any mental disability, or they are segregated in mainstream Roma-only schools or classes.

“The failure of the Slovak government to provide adequate education for all Romani children blights their future educational and employment prospects, and adds to a cycle of marginalisation and poverty for Romani people,” Mazúrová told The Slovak Spectator.

Concerning education the AI report states that although Slovak legislation prohibits discrimination and segregation, no effective legal and policy measures that would ensure implementation in practice have been put in place. It refers to a September 2009 report prepared by the Roma Education Fund which said the proportion of Roma children attending special schools was almost 60 percent and the proportion of special classes with substandard education in mainstream schools was almost 86 percent.

Apart from education, the report also mentions housing issues, particularly the most blatant examples of segregation practices in this area: eviction of Roma from the town centre in Sabinov and a wall that was built to separate a Roma settlement from the houses of Slovak residents in Ostrovany, both in eastern Slovakia. Cases of forced sterilisations are also mentioned in the report along with the note that “authorities were still failing to carry out thorough, impartial and effective investigations into all cases of alleged forced sterilisations”.

In the chapter ‘Torture and other mistreatment’ the report mentions the case of seven police officers accused of mistreating six Roma boys in a Košice police station in April 2009, which was brought to the public’s attention only after the Sme daily published a video recording of the abusive treatment.

According to Mazúrová, the criticism in the report should serve as “an indicator for governments to see whether they have made progress or regressed in the area of human rights”.

However, the office of the government’s plenipotentiary for Roma communities rejected the criticism in the report and called it inappropriate.

“The policy of the government of the Slovak Republic aimed at integration of Roma communities into society is based on the principle of equal treatment and doing away with all kinds of discrimination,” the statement provided to the media by Kristína Lempochnerová from the communication department of the plenipotentiary’s office states.

According to the plenipotentiary’s office, the UN Committee on the Elimination of Racial Discrimination in Geneva reported at its session this year that there had been positive developments in the fight against discrimination in Slovakia, particularly in areas such as housing, education and health care.

Mazúrová agreed that the UN Committee had welcomed some legislative measures adopted by Slovakia, but noted that it also called upon Slovakia to ensure their effective implementation, including regular monitoring. She said AI is concerned that Slovakia’s recently adopted Education Act bans all forms of discrimination but does not have specific measures to ensure that the law is implemented in practice, does not clearly define segregation, and does not say which institution is responsible for monitoring compliance.

“This in practice means that nothing has changed and that discrimination and segregation persist,” Mazúrová said.

The plenipotentiary’s office also wrote in its statement that the Slovak branch of AI has been informed that the state is preparing supportive programmes and conceptual materials aimed at solving Roma problems in a comprehensive and responsible manner.

The office said that AI Slovakia and other NGOs have been invited to cooperate on the revision of Slovakia’s National Action Plan for the Decade of Roma Inclusion, an initiative which Slovakia began holding the rotating presidency of in June 2009. But Mazúrová said Slovakia’s action plan is not specifically focused on the elimination of discrimination and segregation, despite the fact that the theme of Decade of Roma Inclusion is non-discrimination.

“The major problem is that the government refuses to acknowledge that there is a systematic problem of segregation of Roma children within the Slovak educational system and consequently it fails to reverse it,” Mazúrová said.

“The government of Slovakia should make a clear political commitment to the eradication of segregated education of Roma students and develop a concrete plan with specific measures to eliminate the segregation of Romani pupils, instead of introducing a new pilot programme such as boarding schools which, if adopted, will be in absolute contravention of both Slovak law and international human rights standards on non-discrimination by which Slovakia is bound.”