A TELEVISED face-off can attract the masses, provide useful insights into the plans and characters of political leaders, and even decide an election. Unless it’s as boring and disappointing as the “duel” between the prime minister, Robert Fico, and SDKÚ leader Iveta Radičová, who met in their only TV debate of this election campaign on Sunday, May 30. There are five reasons why their duel was not a good one: 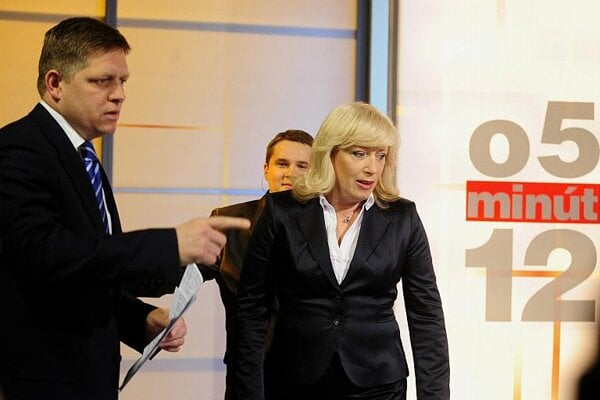 Fico and Radičová before the start of their TV duel. (Source: TASR)
Font size:A-|A+

A TELEVISED face-off can attract the masses, provide useful insights into the plans and characters of political leaders, and even decide an election. Unless it’s as boring and disappointing as the “duel” between the prime minister, Robert Fico, and SDKÚ leader Iveta Radičová, who met in their only TV debate of this election campaign on Sunday, May 30. There are five reasons why their duel was not a good one:

2. The lack of a clear opposition leader. The first problem is that the SDKÚ is no hegemon of the opposition scene. Recent opinion polls show that the SDKÚ has the support of roughly 15 percent of voters, the non-parliamentary SaS 11 percent, and the Christian Democrats 10 percent. Moreover, Radičová is the SDKÚ election leader, but not the party’s chairwoman. As if that were not enough, Ivan Mikloš, who’s number two on the ballot and in the party, clearly has reservations about the way Radičová is leading the campaign. “I went biking in the Tatras during the TV debate, so I didn’t see it,” read Mikloš’s Facebook status on Monday. “But I hear that Fico recalled [Czech socialist leader and election loser Jiří] Paroubek not only by his anger and rhetoric, but also by his wart. So let’s prepare a similar political fate for him in two weeks. Let’s go!!!” There was no mention of Radičová.

3. The non-confrontational approach of Radičová. Not all duels need to result in the death of one of the participants. But there should be at least some conflict. Fico’s Smer party is implicated in shady financing, it put the judiciary in the hands of people with criminal ties and authoritarian manners, it’s impossible to get European funds without paying bribes, the press suffers under oppressive regulation, and the government is ruining the public finances. Mentioning none of this in the final big debate of Fico’s four-year rule seems, well, strange. Radičová was so friendly with the prime minister that it’s difficult to understand why her party is ruling-out a coalition with Smer.

4. STV. Slovakia’s public television is a prime example of why public broadcasting is not necessarily a good idea. At least not in countries with little democratic tradition and where the broadcaster is fully dependent on politicians who pick its directors and provide funding. Throughout his time in office, STV has allowed Fico to meet in debates with his political allies, or lead monologues. In this “duel”, STV chose the cross-border disputes with Hungary and favourable forecasts of economic growth as debate topics, which suited the prime minister perfectly. Fico was allowed to talk for minutes, and the presenter never brought up any of the controversial topics, which Radičová also chose to avoid.

5 Low ratings. Only around 10 percent of the population watched the programme. In part, this was caused by the late announcement, and a missing spark in the coalition-opposition contest. But mostly, it reflects a lack of interest in politics. Voter turnout has long been declining and was down to 55 percent in the last parliamentary elections. It is likely that this time around the number will be lower still. Slovakia has a population of nearly 5.5 million, but in 2006 Smer was able to capture a third of the seats in parliament with just 670,000 votes. It seems people in Slovakia don’t realise how deeply political contests affect their everyday struggles.