Up and down in Bratislava

IT WAS a sunny Friday evening as dozens of people gathered on the terrace of Slovak Radio’s distinctive upside-down pyramid-shaped headquarters. They had come to pay tribute to architect Štefan Svetko, the author of this unusual building, who died last September. The evening event also marked the official opening of the fifth biennial Days of Architecture held on May 28 and 29. 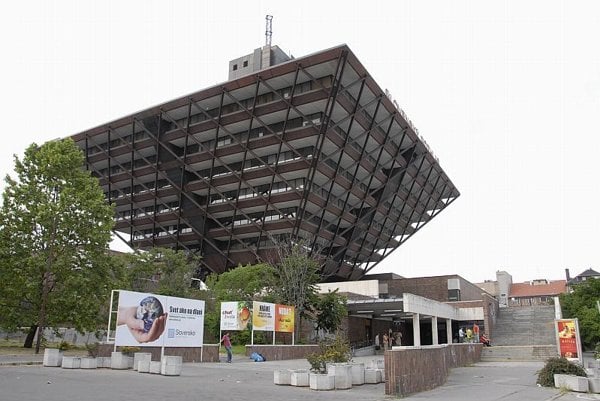 IT WAS a sunny Friday evening as dozens of people gathered on the terrace of Slovak Radio’s distinctive upside-down pyramid-shaped headquarters. They had come to pay tribute to architect Štefan Svetko, the author of this unusual building, who died last September. The evening event also marked the official opening of the fifth biennial Days of Architecture held on May 28 and 29.

“It seems to us that his physical absence, but also the very intensive mental and virtual presence of Štefan Svetko in Slovak architecture, is something from which we could bounce off and start these Days of Architecture,” event organiser Henrieta Moravčíková, who is also the head of the Department of Architecture at the Institute of Construction and Architecture of the Slovak Academy of Sciences, said in her speech. She pointed out not only Svetko’s exceptional achievements in architecture – paradoxically, he was not invited to the official opening of the Slovak Radio building due to his critical opinions of the communist regime at the time – but also his work for the community of architects in Slovakia and deep involvement in public affairs.

During the evening a number of Slovak as well as foreign architects shared their memories of Svetko, and what his work and personality had meant for their development as architects.

One of them was Douglas Gauthier from New York, who in the 1990s together with his colleagues invented the term Parallel Modernism, a concept which encompasses the Slovak Radio building.

“I was here 15-16 years ago doing research on the Cold War, very interested in the qualities and the desperation and the power of that architecture,” he said. “This building by Štefan Svetko is to my mind one of the pre-eminent examples of the relationship between media, politics, form and structure. ...What’s shocking is how powerful the building is in the city, how powerful the icon is and how powerful the protection of the media is in the programme of the building, but then when you go inside it’s almost like a magic between the office spaces and the way they are all put together. Thus I think sometimes these qualities, this need, the desire to communicate beyond oneself, are really what this building represents for me and is one of the pre-eminent things I’ve learned from this and other buildings and architecture I studied in this part of the world.”

What was on offer

This year’s Days of Architecture were subtitled Bratislava Up and Down.

“The main motif of this event was the effort to point out opportunities for development of the contemporary city, which, according to us, should not spread out, taking up more and more land, but on the contrary should densify,” Moravčíková told The Slovak Spectator. “And for the city to densify it has only two possibilities for further growth, and these are up and down.”

Verticals influence the skyline of the city, and in recent years they have been a richly debated theme in Bratislava. By contrast, underground construction, which is usually barely visible but is the inevitable opposite of towers, can be from an architectural or construction viewpoint equally attractive. Within Bratislava Up and Down the organisers wanted to direct the attention towards the dominant vertical buildings and underground spaces which are concurrently considered to be exceptional architectural works.

Over two days visitors were able to visit, accompanied by architects, experts in the history of architecture, or even the authors of the works themselves, 17 outstanding buildings. The group of ‘up’ works included the buildings of Slovak Television and the National Bank of Slovakia, Tower 115, Incheba, Obydick, the television transmitter at Koliba, the new residential developments Tri Veže and Rozadol, as well as Tatra City. The ‘down’ works opened to the public were the Chatam Sofer Memorial, the tunnel below Castle Hill, the underground parts of Bratislava Castle and St Martin’s Cathedral, and a military bunker. Some architects also opened their studios.

The fifth year of this festival confirmed people’s interest in architecture, as the numbers wanting to visit the works selected consistently exceeded the available capacities, and showed that not only architects or people connected with architecture or construction visit such events.


“It has been shown to us repeatedly that [participants] are often ordinary people, who are not involved in architecture and who are from various professions, who attend the Days of Architecture simply because they think that architecture influences their everyday life and want to know more about this,” said Moravčíková. “This is actually our goal: that there should be more and more such people. Alas, in Slovakia architecture is still not part of general culture, or spoken, written and broadcast about. It is still in obscurity.”

Architects welcomed the opportunity to talk with ordinary people about their work, saying they still see the need for further education of the general public in architecture.

“I perceive such events very favourably,” said renowned architect Martin Kusý, who opened the architectural studio he shares with Pavol Paňák during the Days of Architecture. The studio, made from steel and wood, was designed by the architects themselves. It is located inside a water storage container, part of a hundred-year-old former water tower, and impresses visitors with the contrast of materials used, as well as its combination of space and light. “The organisers have chosen good architecture for presentation, meaning that it educates, and I am glad when I see how many people attend because I remember the first time it was held and two people visited our studio. It is necessary to educate the public and teach people what contemporary architecture is. This is a good step to cultivation of all society,” he told The Slovak Spectator.

“Of course, it would be better if there were more ordinary people,” he said. “Because in principle the aim is that the general public know what they should require from architecture. But on the other hand it is good when architects, and especially the younger ones, come because they are learning this and the task of the architect is not only to build but also to educate. And they will then educate their clients and on and on.”

Among those architects who opened their studios was also young architect Matúš Vallo from ValloSadovsky Architects who has organised, for example, Urban Interventions in Bratislava as well as in Prague, offering solutions by invited architects to improve public spaces.

“When we held an open house for the first time during the previous Days of Architecture, only two people visited us,” Vallo told The Slovak Spectator, adding that one of those is now their employee. This time the studio was stuffed with dozens of architecture students.

“Abroad, open houses at architectural studious are often focused on potential clients,” said Vallo. “In Slovakia it is different, with such events being held as if especially for the community of architects – but still, it is a good thing.”

Even though clients of ValloSadovsky Architects have an extensive range of knowledge about architecture and are open-minded, when coming out from ‘his’ world, Vallo is sometimes confronted with extreme opinions about architecture.

“People often tell me that architecture is for people and thus ask why architects do not design what people want,” said Vallo. “The answer is that people do not know the possibilities of architecture completely, what space and emotions it can bring. These possibilities are much bigger than people have become used to. I have seen a lot of very expensive family houses, but if they had commissioned an architect, they would have had a brilliant space. It is our task to lead them where the new housing is heading.”