THE PAST WEEKEND brought sunny weather to most parts of Slovakia, promising that flooded areas in the central and eastern parts of the country should start recovering and damages can be assessed. 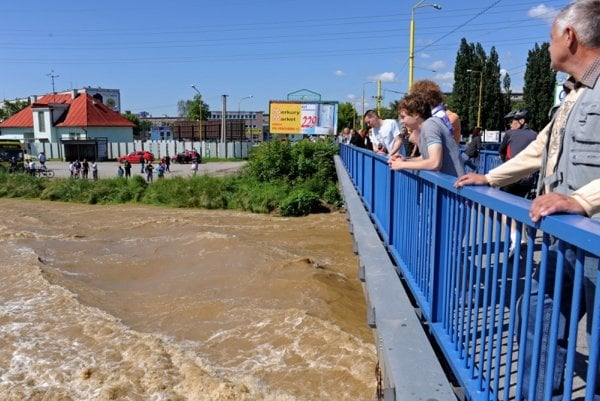 Locals gather on a bridge and on the banks of the Hornád River as the water rises to previously unseen heights in living memory in Košice, Slovakia on June 5, 2010. (Source: Amanda Rivkin)
Font size:A-|A+

THE PAST WEEKEND brought sunny weather to most parts of Slovakia, promising that flooded areas in the central and eastern parts of the country should start recovering and damages can be assessed.

Last week and into the beginning of the weekend, parts of eastern Slovakia were drowning in historically-high levels of flood water. Rains lasting two weeks had dramatically raised river and stream water levels in south-eastern and eastern Slovakia. Hundreds of municipalities in the east were submerged under water and many citizens were evacuated from their homes. Massive landslides temporarily interrupted the railway connection between Bratislava and Košice and railway tracks were underwater near Kysak.

The torrential rains also closed the highway between Prešov and Košice for some time.

Flooding in many regions of Slovakia began as early as June 3 after heavy rains fell across much of the country. The rains stopped on June 4 and most river levels have been decreasing over the weekend of June 5-6, according to the Slovak Institute of Hydrometeorology, as reported by the SITA newswire. The situation in Košice was stabilised but critical conditions continued in the region around the city, particularly in the village of Nižná Myšľa, where landslides occurred after the flooding.

Mayors of the flooded municipalities were asked to submit a list of people who are in material need after their homes were flooded to the country’s labour offices and to the regional government offices. The state government has allocated €25 million to help people with property damage but it was not clear exactly what criteria will be used to distribute the assistance, the Sme daily reported.

Additional resources will be provided from the humanitarian fund of the Labour Ministry, which is planning to assist families in need with about €800, Sme wrote.

Interior Minister Robert Kaliňák said that people will get assistance according to the damages they have suffered.

“I cannot tell you now how much; it will most likely be a kind of lump sum according to the number of those who suffered damages,” he said, as quoted by Sme. “I’m not saying there’ll be no mistakes. But what’s important is that people in need receive the money as soon as possible so that they can pay for their basic needs. This is not compensation for damages – that will come later.”