SHORTLY before the parliamentary election, a leading Slovak daily received an audio recording featuring a voice strongly resembling that of Smer leader Robert Fico. The recording suggested that Smer had accepted undeclared campaign contributions from off-the-books sponsors. On the same day that the Sme daily posted the recording on its website, Smer boss and Prime Minister Fico said he would sue Sme’s editor-in-chief, referring to what he called an “anti-campaign”. 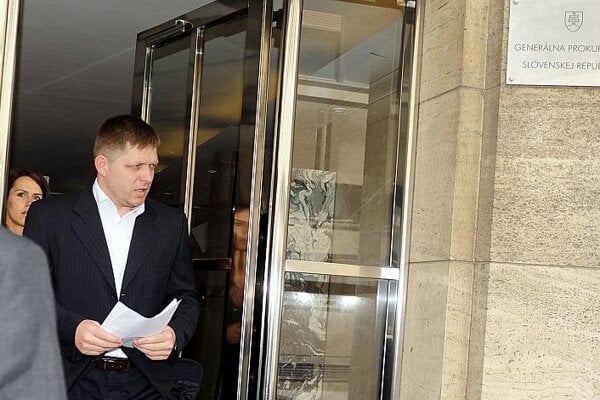 SHORTLY before the parliamentary election, a leading Slovak daily received an audio recording featuring a voice strongly resembling that of Smer leader Robert Fico. The recording suggested that Smer had accepted undeclared campaign contributions from off-the-books sponsors. On the same day that the Sme daily posted the recording on its website, Smer boss and Prime Minister Fico said he would sue Sme’s editor-in-chief, referring to what he called an “anti-campaign”.

Meanwhile, Christian Democratic Movement (KDH) MP and former justice minister Daniel Lipšic also confirmed the existence of the recording and provided it to the General Prosecutor’s Office, to be added to the criminal complaint that his party had earlier filed over suspicions related to Smer party financing.

“I have received an audio recording which proves the suspicion that Smer has been financed in an illegal manner,” said Lipšic, as quoted by Sme. He added that he would not disseminate its content through the media and would leave it up to criminal prosecution bodies to judge the evidence.

Fico called the recording nonsense and a fake, stating: “I can produce as many such recordings as I want”. According to the prime minister the tape was part of an “anti-campaign” against the Smer party and his government.

At a hastily arranged press conference, one of his last before the election, Fico used vulgar language to criticise journalists for posting the recording. “Now you all will be jerking off about it; I wish you a pleasant sexual experience,” he said.

According to Fico, those who cannot reconcile the fact that Slovakia is posting good numbers and that unemployment is dropping have no other option but to “walk the path of deceit and lies”.

“We consider the recording such an important thing that despite the fact that it is two days until the elections, the public has the right to know what it means,” Kostolný said in a video posted on Sme.sk on June 10. “I do not know what campaign the prime minister is talking about. Sme daily is not involved in any campaign.”

Sme.sk also published transcripts of the recording, which features a voice alleged to be that of Fico.

“I only can say that I have secured; and this is what I can tell, and I hope no one is listening, [I have] secured for this year 35 for the next [years] about 40, plus other things,” the voice on the recording published by Sme.sk says. “I have secured them, like the money, with my own head.”

The figures are believed to refer to millions of Slovak crowns; Sk30 million is now equivalent to about €1 million.

The recording emerged only a couple of weeks after a founding member of the party, Bohumil Hanzel, suggested in interviews with the Slovak media that Smer offered state positions and seats in parliament in return for cash to finance its 2002 election campaign.

On June 1, Hanzel deposited with the Swedish Embassy a sealed envelope containing what he said were documents related to what he called the “corruption background” of Smer. He showed the envelope to journalists without revealing its exact contents. Hanzel then asked Swedish Ambassador Mikael Westerlind to pass the documents to Slovak Prosecutor General Dobroslav Trnka in the event that “something happens to me”.

In an interview with the Sme daily earlier this year Hanzel claimed that secret deals were signed by Smer with off-the-books sponsors ahead of the 2002 general election, guaranteeing the individuals state posts and other benefits in return for multi-million crown gifts, providing Smer won the election.

In the 2002 election Smer performed less well than expected and spent the following four years in opposition.

Hanzel, who founded Smer with Fico in 1999, said that the prime minister also boasted of how he himself had reeled in cash for the party’s first national election campaign. Hanzel claimed the party spent Sk284 million on its aggressive 2002 campaign, far in excess of the Sk10.6 million Smer reported in its official accounting, according to Sme.

Hanzel, calling himself “a huge pedant”, said he kept detailed records of each meeting and conversation with Fico and that he is ready to back up his claims in front of a judge.

Referring to the allegations about Smer party financing, political scientist Grigorij Mesežnikov earlier told The Slovak Spectator that the consequences of the affair will be far-reaching, even if they do not have a large impact on the party before the election.