FLOODS on a scale previously unseen in Slovakia have put even more pressure on the already tight state budget and have prompted the government and the Slovak parliament to take action only a few days before the general election. 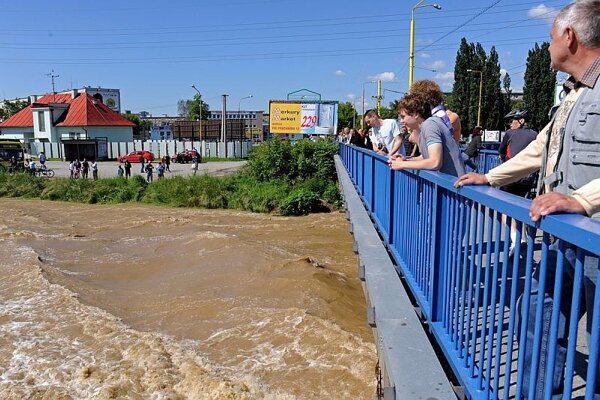 FLOODS on a scale previously unseen in Slovakia have put even more pressure on the already tight state budget and have prompted the government and the Slovak parliament to take action only a few days before the general election.

Rains lasting two weeks had dramatically raised water levels in rivers and streams in south-eastern and eastern Slovakia which then literally drowned many areas with historically-high floodwaters. Hundreds of municipalities in the eastern part of the country were submerged and thousands of citizens were evacuated from their homes. Massive landslides temporarily interrupted the railway connection between Bratislava and Košice and railway tracks near Kysak were underwater. Flooding in many regions of Slovakia began as early as June 3.

The situation in Košice was stabilised but critical conditions remained in the region around the city, particularly in the village of Nižná Myšľa, where landslides occurred after the heavy rain. The damage caused by the flooding in that municipality is estimated to be €30 million as 40 houses were damaged and 15 of them must be demolished, said Marian Karvanský, the village’s mayor, as reported by the TASR newswire.

Mayors of the flooded municipalities have been asked to submit a list of people who are in immediate material need due to the flooding. The Labour Ministry is providing lump-sum financial assistance of about €600 to over 1,100 families, according to the Sme daily. The overall amount allocated for this purpose from the ministry’s Humanitarian Fund amounts to almost €673,000.


The state government additionally allocated €25 million on June 5 to assist those experiencing property damage and these funds will be distributed through the Interior Ministry. In the first wave, between 17,000 and 18,000 families will receive financial assistance, Interior Minister Robert Kaliňák stated, as reported by TASR. Kaliňák said this initial assistance is not meant as compensation for property damage but rather as immediate funds to help the flooding victims deal with their current existential problems. Further compensation will be paid later during the month of July, the minister said.

The floods have prompted the government cabinet to make several proposals and parliament was reconvened just a few days before the election. The government decided at its June 9 cabinet session to create a special committee to handle the consequences of the flooding and gave the committee responsibility for calculating the level of damage.

Slovakia will ask for financial assistance from the European Union’s Solidarity Fund before the end of June, TASR reported. A grant from this EU fund is only available if the damage caused directly by the flooding exceeds €378.21 million. The government made initial estimates that the flooding caused losses of over €267 million but this figure was incomplete since several flooded areas remained inaccessible and the degree of damage could not be estimated before the meeting.


Parliament was reconvened on June 10 – even though it had officially closed its term in May – to discuss the government-proposed measures, which have become known as the ‘anti-flood package’, in fast-tracked proceedings.

Opposition parties criticised the government’s attempts to intervene and tackle the issue of flood damages only two days before the election, saying that the losses were preliminarily estimated to be €230 million while the funds that could be made available through the ‘package’ would only amount to €4 million.

“I’m afraid this session is the last, desperate attempt to win support before the election,” said Pavol Hrušovský of the Christian Democratic Movement (KDH), whose MPs proposed that the money allocated for construction of the National Football Stadium, a sum of about €27 million, should go to flood victims as well, TASR reported.

The coalition parties, however, refused to accept the KDH proposal and voted jointly to pass the government-proposed ‘anti-flood package’. In the end, 112 of the 114 MPs present voted in favour.

The Association of Towns and Villages of Slovakia (ZMOS) said that it expects the funds allocated from the state budget to help flood-hit areas to be the most significant source of financial assistance at this time.

Several civil society initiatives have started raising funds to help the flood victims, among them People in Peril, Catholic Charity, the Greek-Catholic and the Evangelical churches, the Slovak Red Cross and others.

ZMOS has also established a Solidarity Fund which will be a vehicle to raise funds from among the association’s members to help “those towns and villages that were most affected by floods”, ZMOS spokesperson Helena Poláková told The Slovak Spectator, adding that as of June 9 the village of Štrba had contributed €5,000 and the town of Snina had sent €20,962 to the fund.

“At the moment ZMOS is holding talks with representatives of the financial sector – banks and insurers – with the aim to find the fastest possible way to compensate the flood-damaged towns and villages,” Poláková said.

According to Poláková, it is crucial that those in need receive assistance as soon as possible.

“ZMOS sees the cooperation and solidarity positively and appreciates the decisions of local governments who, without hesitation, offered help to their colleagues in the flooded towns and villages,” she said.

One of the proposals passed by parliament on June 10 is aimed at paying compensation to farmers who suffered damages greater than €2,000 because of flooding.

Stanislav Nemec, the spokesperson for the Slovak Agricultural and Food Chamber (SPPK), said that damage to the agricultural sector caused by the flooding is immense. He said waterlogged or flooded fields as well as fields that could not be planted because of the flooding might cover up to 250,000 hectares.

Nemec said the actual damage can only be calculated after this year’s harvest but SPPK expects it to be over €100 million. He noted that the losses caused by the floods could destroy some farmers since the financial crisis last year weakened even the strongest companies.

SPPK is proposing both immediate and long-term measures to deal with the consequences of the current floods and the possibility of similar floods in the future. The organisation says direct compensation should be divided into several stages.

First, financial help should be delivered immediately, for instance in the form of deposits to farmers, to help them get over the hardest time right now, even before the losses can be definitively calculated.

“When the water drains away, farmers will have to re-cultivate their lands and try to do some substitute seeding if possible, which all costs money they don’t have,” Nemec told The Slovak Spectator, adding that the state’s budget chapter for agriculture lacks money and that finances should be found elsewhere.

In the long run, Nemec said a comprehensive agricultural insurance mechanism should be introduced by the government because Slovak insurance companies do not currently offer products for farmers that cover risks from flooding, like other countries do, in which available insurance includes state participation and guarantees. He said that agricultural insurance in Slovakia is expensive and unmanageable for many farmers.