Statue of Svätopluk unveiled in Bratislava

A BRONZE STATUE of Svätopluk astride his horse was unveiled Sunday evening of June 6 in front of Bratislava Castle. Svätopluk is remembered as the greatest king of the Great Moravian Empire. 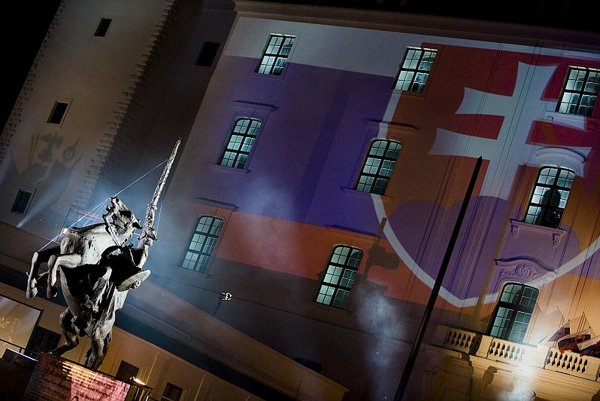 A BRONZE STATUE of Svätopluk astride his horse was unveiled Sunday evening of June 6 in front of Bratislava Castle. Svätopluk is remembered as the greatest king of the Great Moravian Empire.

Slovakia's three highest-ranking officials - the president, prime minister and the speaker of parliament - attended the ceremony, the SITA newswire reported.

Prime Minister Robert Fico said that he sees the statue as a symbol of the birth of the second pillar of national self-confidence, which, he said, is now being built.

The bronze statue on a granite base is 7.8 metres tall. The text on the base reads "Svätopluk - King of Old Slovaks", and carries the opening salutation from a papal bull which Pope John VIII sent to Svätopluk in 880 AD.

The statue was designed by Ján Kulich, a sculptor prominent during the communist era in Czechoslovakia.

Before the ceremony a group of young artists waved red banners to protest against the symbolism of the statue, its location and the artist who created it. They claimed the statue represents a gesture of power, a residue of 19th century thinking and that it was conceived and executed with no discussion or debate.

They also objected to the location, saying that the Slovak power elite have expropriated some of the most prime real estate in the country, at Bratislava Castle, to further their own agenda.

The young artists also felt that because of the choice of Kulich as the artist it represented a step backward toward the “normalisation” period that followed the Soviet invasion of Czechoslovakia in 1968.