THE BEACHES along the Adriatic Sea, the Trevi Fountain in Rome, the canals of Venice, pasta and prosciutto are perhaps the things that define Italy in the minds of many Slovaks, who often view Italy as one of the closest places for a sunny holiday by the sea. To show that Italy has much more than sun and sand to offer, the Dolce Vitaj festival invites Slovaks to sample Italian culture in several Slovak cities throughout the entire month of June. This is the third year of the festival. 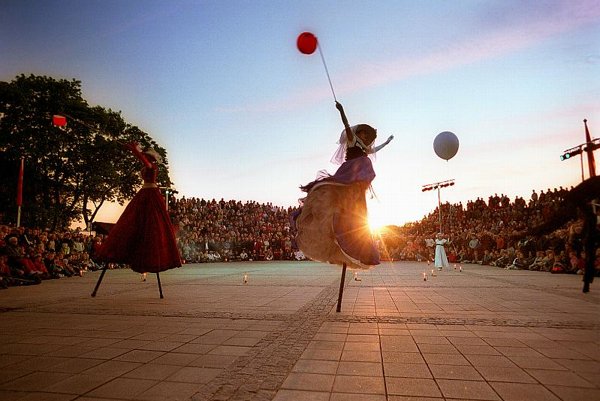 THE BEACHES along the Adriatic Sea, the Trevi Fountain in Rome, the canals of Venice, pasta and prosciutto are perhaps the things that define Italy in the minds of many Slovaks, who often view Italy as one of the closest places for a sunny holiday by the sea. To show that Italy has much more than sun and sand to offer, the Dolce Vitaj festival invites Slovaks to sample Italian culture in several Slovak cities throughout the entire month of June. This is the third year of the festival.

The ambition of the festival organisers – the Italian Institute of Culture, the Italian-Slovak Chamber of Commerce and the Italian Embassy in Slovakia, with support from the general partner, the Italian energy producer Enel, and other sponsors – is to present the many cultural novelties that Italy offers today. Even though the aura of Italian artistic greatness has perhaps declined since the heady years of the Renaissance, much artistic inspiration and creativity still comes from the boot-shaped Mediterranean country.

“Through this festival we want to offer our Slovak friends the quintessence of Italian culture,” said the Italian ambassador to Slovakia, Brunella Borzi. “Because through better mutual knowledge of each other’s cultures, political, trade and social relations can also improve.”

The festival’s events are not limited only to Bratislava, as the third edition of the festival has venues in six other Slovak cities: Piešťany, Poprad, Trnava, Žilina, Košice and Zvolen. According to Borzi, this is designed to make the message of the festival – connecting the two countries’ cultures – available to a wider audience and to welcome Slovaks from across the country “to the particular world, to the world Made-in-Italy, in which we connect art, culture, creativity and passion”.

“Our two cultures are joined already in the very name of the festival, which is poetic, playful and Fellini-like,” said Teresa Triscari, the director of the Italian Institute of Culture in Bratislava.

Triscari said the festival intends to present an intersection among various contemporary forms of Italian culture – through literature, music, and cinema, but also via gastronomy, design and other manifestations.

“Cultural manifestations should serve as a bridge between the two cultures, and should serve to strengthen the feeling of Europeanism,” Triscari said.

The festival includes over two dozens events just during the month of June. The opening concert took place in downtown Bratislava on June 1, and featured the string quartet Solisti del San Carlo from Naples performing opera arias by Bizet, Puccini, Verdi, and Lehár as well as famous Neapolitan songs.

Several exhibitions that have already opened for visitors will continue until the end of the month and beyond. These include an exhibition of photographs from the Foundation La Colombaia of Luchino Visconti, one of the most famous directors of Italian cinematography, on display in the Italian Institute of Culture and an exhibition entitled ‘50 Years of Italian Fashion’. The latter is available at the Pálffy Palace venue of the Bratislava City Gallery and displays fashion accessories and historic dresses which tell the story of the style and creativity of the main designers and manufacturers carrying the brand ‘Made in Italy’.

Another event offers copies of mosaics from the Basilica in Ravenna – medieval mosaics – as well as modern works by current students of fine arts in Ravenna. This exposition was opened during the first week of the festival in the hall of the Culture Ministry in Bratislava and also in the Galleria Rotunda in Košice.

“This exhibition bears the name ‘Fantasy Hidden in Mosaics’ and shows that mosaic is the most ingenious expression of art from the Middle Ages until the present day,” Triscari said at the press conference which opened the festival. “The contemporary mosaic art was chosen for display in Bratislava because we know that there is an important school of mosaic art here and we want to create a bridging.”

One of the most significant events of the festival is traditionally the presentation of the Elsa Morante Prize for cinematography. The prize is awarded each year to both a Slovak and an Italian director. The award winners this year are Dušan Hanák and Guiseppe Tornatore, whose latest movie, Baaria, was shown in a pre-premiere as part of the festival. Another prize went to Miroslava Vallová for her translations and spreading of Italian culture.

Tornatore was expected to attend the ceremonial awarding of the prize and to hold a discussion with Slovak cinema enthusiasts the evening before. But due to unforeseen complications the director was not able to travel to Slovakia to receive the award in person during Dolce Vitaj 2010. Organisers promised he would visit Bratislava in the autumn at which time the prize will be personally delivered to him.

Concerts, additional exhibitions and open-house days are other features of the festival programme, which will officially close on June 30 with the last event – the street performance of Teatro Tascabile di Bergamo, a street stilts theatre, named ‘Valse’ taking place at dusk in Bratislava’s Main Square.

Michele Bologna, the vice-president of the Italian Chamber of Commerce, said that the chamber gathers together more than 300 companies, which indicates that business cooperation between Italy and Slovakia is working well.

“But that cooperation cannot exist without finding a mutual understanding also in culture, and I believe the best tool to do business is through culture and cultural cooperation,” said Bologna, who was one of those responsible for initiation of the Dolce Vitaj festival.

“When we started the festival three years ago, we wanted to show the best Italy can offer to Slovakia in the cultural area,” he said, explaining that the aim was to show that contemporary Italy means a lot more than just the stereotypical, Fellini-like ‘Dolce Vita’.

“We want to attract not only the ‘Italici’ – those who love Italy and study the language – but we also want to spread the message to others so that everyone can find out there is something to see, something to listen to and something to taste,” Bologna added.

For more information on the complete programme, see www.dolcevitaj.eu.