A NEW educational trail that aims to provide information on rare plant and animal species and their protection has been opened in the Beckovské Skalice nature reserve at the foot of Považský Inovec. 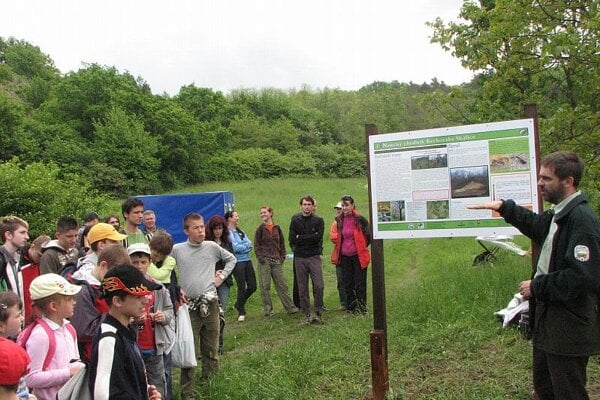 A NEW educational trail that aims to provide information on rare plant and animal species and their protection has been opened in the Beckovské Skalice nature reserve at the foot of Považský Inovec.

Under the auspices of the Micro-Regions for Nature project, a Trenčín civic association, Pre prírodu/For Nature, received a €39,497 grant from the Ekopolis Foundation to prepare the educational trail. The grant was financed by the European Economic Community and Norwegian financing mechanisms and from the Slovak state budget.

The path consists of seven information boards which describe ways of preserving and caring for various biotopes that can be found in the reserve – such as meadows and grazing lands, fallow land, forests, and quarries.

“Every biotope requires a specific approach,” Katarína Hlavatovičová of Pre prírodu explained, “and apart from pointing out correct and incorrect methods of care, we also demonstrate the way that we do look after the biotopes. The last board shows the landscape before humans arrived here and the changes that have taken place since.”

Pre prírodu provides care for the plants and animals in the reserve along with the State Nature Preservation Agency, the Slovak Union of Environmentalists and the municipality of Beckov, as well as volunteers from the general public.

The Beckovské Skalice natural reserve covers an area of 29.5 hectares and was established by the regional self-government office in Trenčín in 2003, after years of effort by professional and lay preservationists to preserve this “island” with its richness in animal and plant species and various biotopes which generally came into existence due to human agricultural activities.


The idea of the reserve was not only to preserve the plants and animals through legal means but also to cultivate them in such a manner so as to help solve problems connected with protection of nature and sustainable life in Slovakia.