WITH only around 2.1 percent of Slovaks speaking French compared to 32 percent speaking English, according to a recent Eurobarometer survey by the European Commission, the language of Moliere remains a rarity rather than the norm on Slovak CVs. However, a coin has two sides, and an apparent disadvantage can be a valuable asset, French teachers and diplomats agree. 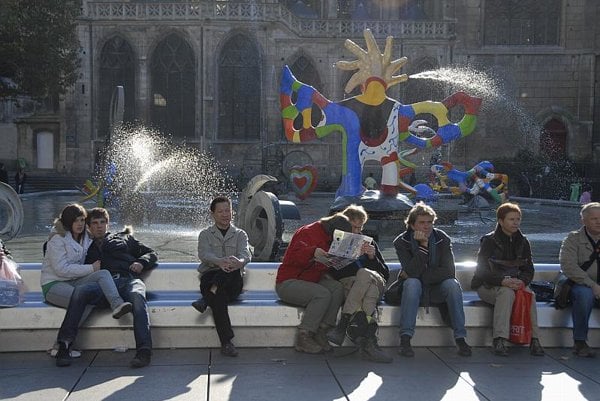 WITH only around 2.1 percent of Slovaks speaking French compared to 32 percent speaking English, according to a recent Eurobarometer survey by the European Commission, the language of Moliere remains a rarity rather than the norm on Slovak CVs. However, a coin has two sides, and an apparent disadvantage can be a valuable asset, French teachers and diplomats agree.

The key agency in foreign language acquisition is obviously public education. Today, around 25,000 students pursue French language study throughout their elementary and high-school education, more than 700 attend bilingual schools with French immersion classes, and almost 600 study French as a major subject at university. Moreover, Slovak universities offer five study programmes in the area of financial and political sciences with courses given in French.

Yet some schools say that the number of young people interested in studying the language is actually declining slightly.

“In the past years, there has been a decrease in applications to study at our school,” said teacher Michal Falath, who is responsible for the French bilingual section at the Gymnázium Metodova secondary grammar school in Bratislava.

He said that some 190 pupils sent in applications this year, a dozen fewer than last year and around 60 fewer than two years ago.

“It is still comparatively good given the fact that there are only 56 places available every year, but we have been used to bigger crowds here.”

Falath said that the decline might be connected with the still-growing popularity of English as well as with the fact that many schools, who he said are “literally fighting for enrolments”, put greater emphasis on foreign language teaching, a fact that makes bilingual sections less attractive.

Grégoire Brault, attaché of the French Embassy in Slovakia for linguistic cooperation, who is based in Košice, confirmed that the number of students of French has dropped in eastern Slovakia as well, at bilingual sections and at other schools alike.

“This is chiefly due to the lack of French-language teachers at Slovak primary schools,” he told The Slovak Spectator. “We have therefore been trying to support the existing structures, meaning that we train teachers and encourage them to teach French. To ensure maximum return for the pupils’ efforts we also prepare, for example, a special teenager’s version of the well-known DELF certification in French studies [equivalent to the Cambridge ESOL certificates in English].”

Brault’s diplomatic colleagues in Bratislava are also doing their best to promote the French language among Slovaks, particularly through organising and supporting numerous cultural programmes, such as The Week of La Francophonie or the French Film Festival.

The embassy also provides a wide range of French-language courses for all age categories at the French Institute in Bratislava or at the four branches of the Alliance Française located in Lučenec, Banská Bystrica, Poprad and Košice, which annually attract around 2,000 enrolments in total. This figure has remained stable over the past few years.

According to Jacques Bortuzzo, another French attaché for linguistic cooperation, it is the very fact that French is a comparatively rare language that is the best reason to take up learning it.

“Speaking English is necessary, but not sufficient to sell oneself in the labour market, since it has now become a must,” he remarked. “Apart from its reputation as a melodic language, French also enjoys the status of being one of the three working languages of the European Union as well as of being the lingua franca of law and diplomacy. What is more, thanks to the 30,000 jobs created in Slovakia by French businesses and the strong economic links between the two countries, French indeed proves to be a valuable asset for Slovak jobseekers.”

However, jobseekers are not the only ones who can profit from competence in the French language. Those who decide to pursue their studies in French at universities, either as a major or as part of another study programme, can take advantage of various opportunities offered to them by the embassy or even French businesses.

He also mentioned a recent initiative by carmaker PSA-Peugeot-Citroën which enables Slovak students in engineering and management to undertake fieldwork and try out various careers; and a partnership between Slovak and French scientists, university teachers and their students in the area of nuclear technology.

Falath from Gymnázium Metodova stated that his school’s internal statistics confirm that having a good command of French is an important competitive advantage for young people.

“It has been fifteen years since our first graduates left the school and they have generally been very successful in their careers, regardless of their specialty choice,” he said. “Some continued their studies in France, others have worked there and now for instance represent French companies in Slovakia, etc.”

And it seems that not only Slovak learners can benefit from French-language teaching.


Thomas Laurent, one of a score of French native-speakers currently doing their teaching internships at Slovak high schools and universities, said his experience as a lecturer at the University of Prešov is as enriching for him as it is for his students.

“A graduate with a FLE [i.e. Teaching French as Foreign Language] diploma cannot teach at a university in France,” he told The Slovak Spectator. “In other words, in Slovakia I was able to get a much more prestigious post than I would probably have had in my own country. Working in the local academia has therefore truly been a unique and interesting opportunity for me.”